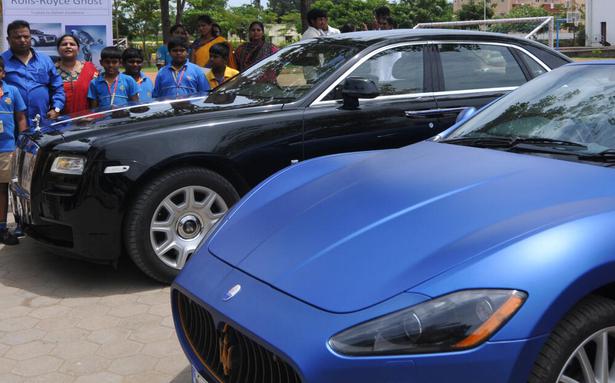 The people of Tamil Nadu are traditionally seen as conservative and are typically reticent when it comes to flaunting their wealth, unlike their fellow citizens in Northern or Western India. That view may not hold anymore as the State is now the fastest-growing market for super luxury cars, priced above ₹1 crore, for the premium carmaker Mercedes-Benz India.

According to the company, doctors, lawyers, senior IT professionals, young entrepreneurs are lapping up Mercedes-Maybach, GLS Maybach, GT 63 AMG, G63 AMG, G350 — priced in the range of ₹1.7-3 crore. S-Class and GSL Maybach are the top sellers among other super luxury cars.

“If you see the super luxury car growth for us in Tamil Nadu, it is 90 per cent in the State, the highest growth rate recorded among the States for our brand. Tamil Nadu also recorded a higher growth of 35 per cent as compared to all India growth of 26 per cent in overall luxury cars for Mercedes in Q1 of 2022,” Santhosh Iyer, Vice President-Sales & Marketing, Mercedes-Benz India told BusinessLine. The company, however, did not share the absolute numbers in terms of vehicles sold.

The strong growth for luxury cars as well as ultra luxury cars in Tamil Nadu indicates that the luxury market in the State is maturing faster and social-economic consumption is also higher. “This is fueled mostly by the younger customers including a new set of people, in addition to traditional buyers,” Iyer added.

However, in terms of volumes for super luxury cars for Mercedes-Benz, Mumbai and Delhi continue to be the top markets, followed by Bengaluru and Tamil Nadu.

“Since growth is now faster in Tamil Nadu, it will catch up with other big cities over a period of time. We now have a strong network here to take advantage of this momentum. In addition to two dealers in Chennai, we have representations in Madurai and Coimbatore and have a service center in Salem,” said Iyer.

According to Knight Frank’s The Wealth Report 2022, among key Indian cities, Bengaluru witnessed the highest growth in the number of UHNWIs (ultra high net worth individuals with net assets of $30 million or more) with 17.1 per cent to 352 followed by Delhi with 12.4 per cent to 210, and Mumbai with 9 per cent to 1,596 in 2021.

Chennai reported a 15 per cent growth to 160. But, Chennai along with Ahmedabad is expected to witness 66 per cent growth in the number of UHNWIs during 2021-2026, the second-highest growth rate after Bengaluru (89 per cent).