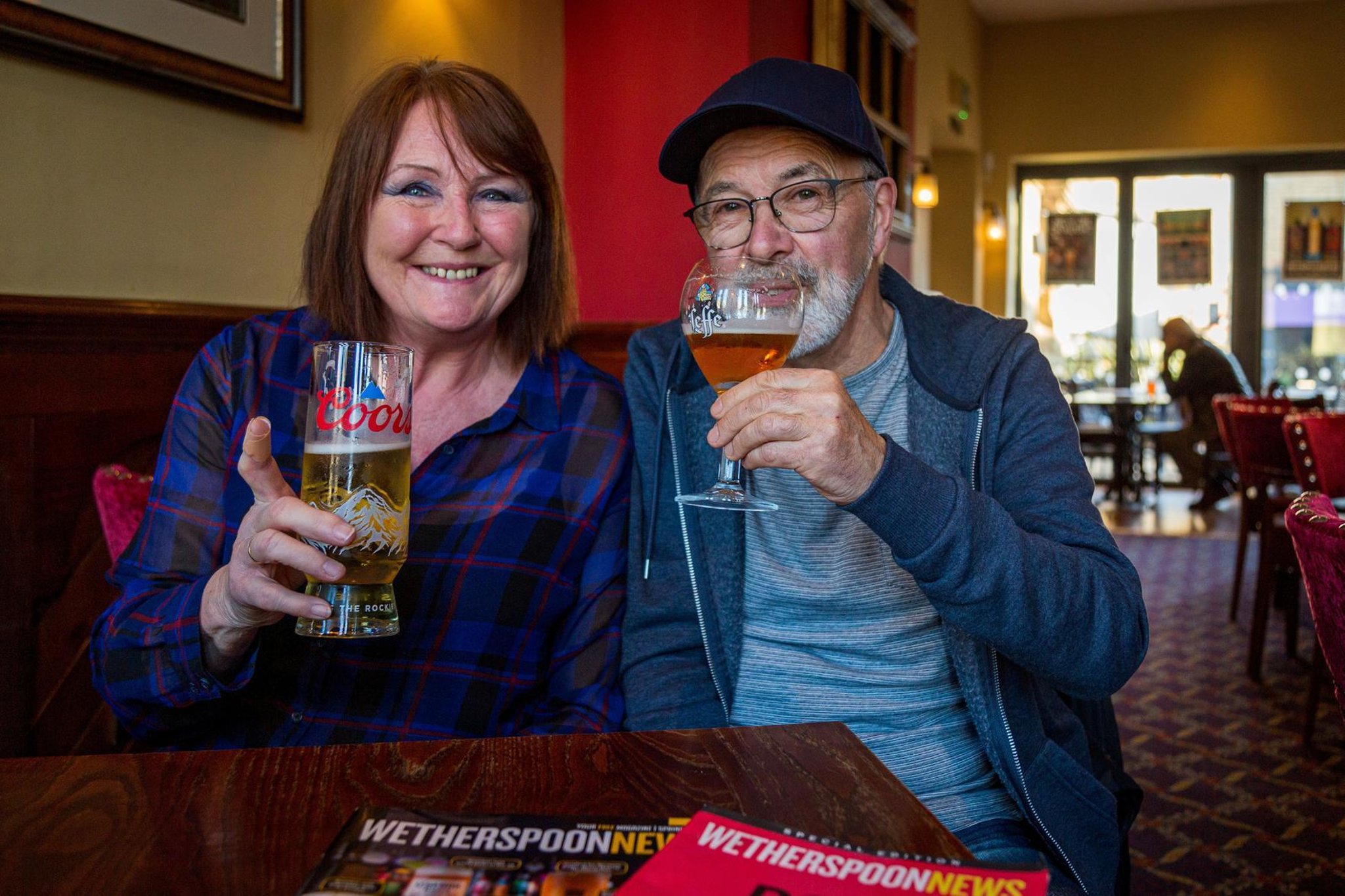 Phil, 74, and Julie Fox, 71, set out to sample just 100 of boozers but have notched more that triple that figure after traveling the length and breadth of Britain in search of pints.The furthest the couple from Brighouse, West Yorks., have gone to quench their thirst during their 18-year “hobby” is a pub in St Ives, Cornwall – nearly 400 miles away.

But despite their ambitious attempt to bag as many pubs as possible, they don’t believe they’ll visit all of Wetherspoon’s 861 establishments in their lifetime.

Grandfather-of-five Phil originally came up with the idea while drinking in his local ale house and said it has been a great way to “see other parts of England.”

And next month, when he and Julie celebrate their 40th wedding anniversary, they plan to visit three recently opened Wetherspoon pubs in towns across West Yorkshire.

Phil said: “On Easter Saturday, it’s our wedding anniversary, so as a treat to ourselves, we’re going to get a day ticket on the train and we’re going to do all those three.”

“We’ve been going to Spoons a long time, and we have grandkids, and it’s ideal for them because if they knock a drink over, nobody gives them the evil eye.”

Phil, a former newspaper production worker, became aware of the Weatherspoon pub franchise in 2004 when his car broke down and he needed somewhere to shelter.

He said: “We were on our way up to our daughter’s place in Newcastle, and we were going up through The Dales and my car started playing up.

“I went for a wander round the town, and we went into this pub, and we couldn’t get over the price of everything – how cheap it was!

“That was the first time I really realized what a Wetherspoons was, but I’m sure I’ve been in them before that.”

Phil struck upon the idea of ​​counting up how many Wetherspoon pubs he and his wife had visited after he retired at the age of 60 in 2007.

He said: “One day we were satisfied in the Obediah Brooke Wetherspoon pub, in Cleckheaton, and me and my wife ran out of conversation.

“So I just said, ‘I wonder how many Wetherspoons we’ve been in?’ We sat there and by the time we’d had another drink, I said we’re up to about 60 odd.”

Of all the pubs Phil has visited with Julie, a former Sun page three girl and retail worker, he ranks The Chief Justice of the Common Pleas, in Keswick as his favourite.

He explained: “It’s a converted magistrates court and police station. You can sit in the converted two cells and drink and eat.

“Where the magistrate sits, ye can sit there, and where the defendant sits, there’s just enough room for a small table, so two people can sit in there.”

“This one’s also got an all-slate bar, because a lot of slate used to come from up in Cumbria, and it’s absolutely gorgeous.

Phil also said he intends to seek out a pub in London as it features his name.

He said: “We’ve done over 30 in London. We’re going down there in June this year, we’re going to try and do some South of the river.

“But there’s one particular one we want to do called the Fox on the Hill, Denmark Hill, for no other reason than it’s got my name in it.

Phil said the rewards of his “hobby” haven’t just come in the cheap pints and pies he’s consumed at establishments across Britain.

It’s also given him an excuse to continually travel to all parts of the country and stumble across unique sites and cultural artefacts that towns and cities have to offer.

He said: “We’ve just been down to Kings Lynn.

“The Wetherspoons is nice, and you discover things like Kings Lynn has got his own church with a leaning tower – the leaning tower of St Stephens, the locals call it.

“You just see nice parts of the country.”