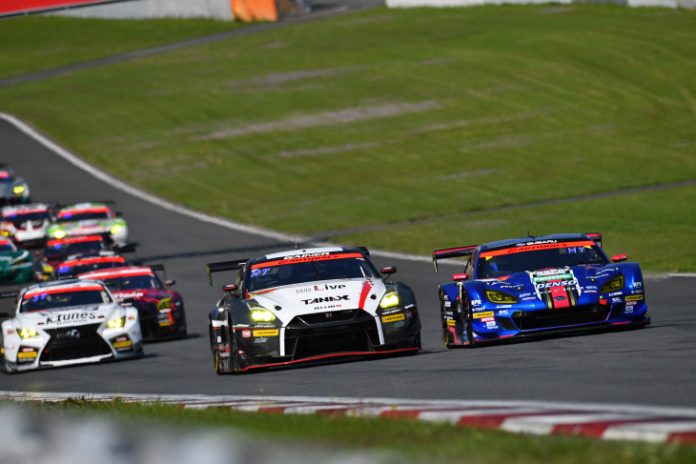 After a two-month layover, the Autobacs SUPER GT Series is set to return in two weeks’ time as the series makes its second trip of the year to Fuji Speedway on August 6-7. The Fuji GT 100 Lap Race is the second 450 kilometer “semi-endurance” event of the season, the first taking place during the Golden Week holiday on 4 May.

41 cars are on the entry list for this fourth round of the 2022 season, headlined by the 15 GT500 class cars. Toyota, Honda, and Nissan have each won one of the first three races this season, and these next three races – the “mid-summer triple” – will reveal to us which teams will compete for the championship at season’s end.

After their win in the Suzuka 300km back in May, the #3 CraftSports Motul Nissan Z of Katsumasa Chiyo and Mitsunori Takaboshi enters the Fuji 100 Lap Race tied at the top of the table with the Okayama winners, the #14 Eneos X Prime Toyota GR Supra of Kazuya Oshima and Kenta Yamashita. Both have 26 points after three races, and thus will carry an effective 52 kilograms of Success Ballast – applied as 35 kilos of physical weight, and for the first time this season, the Stage 1 fuel flow restrictor which limits their maximum fuel flow from the standard 95 kg/hour to 92.6 kg/h.

The #8 ARTA Honda NSX-GT (Tomoki Nojiri/Nirei Fukuzumi) won the Fuji 450km in May, but one that was shortened to just 62 out of a scheduled 100 laps due to multiple red flags and severe accidents – and as such, only paid out half points. They’re carrying 30kg of Success Ballast into the weekend without an extra fuel flow restrictor. It’ll be an opportunity for ARTA to pull off the rare season sweep at Fuji, which hasn’t happened in the premier class since 2005.

Of note, the #16 Red Bull Motul Mugen NSX-GT (Ukyo Sasahara/Toshiki Oyu) will carry a four-place grid penalty into the weekend, after Oyu exceeded six penalty points under the SUPER GT Driving Moral Hazard System following his accident with the #244 Hachi-Ichi GR Supra GT300 at Suzuka. Oyu will also have to sit out the final hour of practice that morning.

In GT300, there are just 26 cars entered, and two prominent teams will be missing from the grid at Fuji.

Fans of Tsuchiya Engineering will know that their #25 Hoppy Schatz Toyota GR Supra was involved in a testing accident at Suzuka Circuit on 21 July. Driver Seita Nonaka was not injured after a high-speed crash at the notorious 130R corner, but due to the damage sustained and financial complications, the 2016 GT300 champion squad will miss this upcoming race at Fuji.

Also missing the race are Busou Drago Corse. Their #34 Busou raffinée Nissan GT-R NISMO GT3 driven by Masataka Yanagida and Yuji Ide finished second at the Fuji 450km, so their absence is a big surprise.

Returning to the grid in their place are privateers R’Qs Motor Sports, with a new Mercedes-AMG GT3 for Hisashi Wada and Masaki Jyonai.

For the 100 lap race, several GT300 teams have drafted in third drivers. Tsubasa Kondo will accompany Seiji Ara and Augusto Farfus in the #7 study BMW M4 GT3, and deservedly so, after Ara and Kondo won the Suzuka 300km together. Shintaro Kawabata will join Takeshi Kimura and Kei Cozzolino in the #9 Pacific Hololive NAC Ferrari 488 GT3 Evo, a tandem that has shined in GT World Challenge Asia this month. Yusuke Shiotsu, who accompanied Ryuichiro Tomita and Riki Okusa when their #10 TanaX Gainer GT-R won the shortened Fuji 450km, is back and hoping to see some seat time during the race this time out.

Also making his series debut is 41-year-old Masaya Kono, an alumni of the Nissan Driver Development Program (NDDP) original class of 2006, with NILZZ Racing in the #48 Shokumou K’s Frontier GT-R. Kono passed his rookie certification test in March at Okayama.

Balance of Performance (BoP) updates since the first Fuji round see the #61 Subaru BRZ R&D Sport (Takuto Iguchi/Hideki Yamauchi) gain 25 kg of weight, while the Audi R8 LMS GT3 gains 10kg and the BMW M4 GT3 gains 5kg. The Toyota Prius will shed 10kg and the Mercedes-AMG GT3 will lose 5kg. The BMW and the Nissan GT-R GT3 will also have their boost pressure reduced slightly near the top of the powerband.

All teams will be obliged to carry out two mandatory refueling stops during the race, and will be allowed at least seven sets of dry tires and eight sets of wet tires for the weekend.