Bride Reveals How She Threw Her Dream Luxury Wedding For £6,000 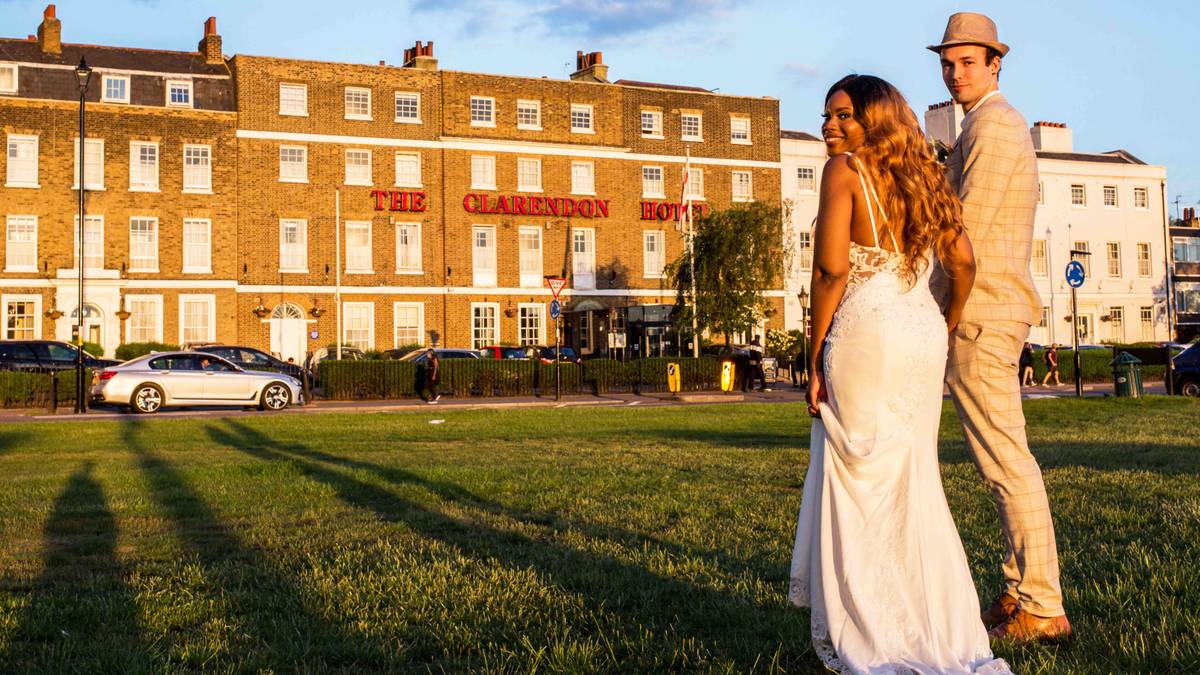 A bride has revealed how she managed to spend less than £6,000 on her dream wedding.

But the savvy couple managed to spend just under £6,000, despite Hitched reporting that the average UK wedding in 2021 setting couples back £17,300.

Collet revealed how they spent under £6,000 (Credit: Caters News)

“We wanted to keep the costs low, so aimed to spend between £6K and £12K,” says Collet.

“We could only have 30 people at the wedding due to the covid restrictions at the time and we weren’t allowed music, but we made the most of the day and the sun was shining so we were able to be outside, as well as being in the reception room.

“We got married at Severndroog Castle and the wedding reception was in the Clarendon Hotel in Blackheath.

“The castle was just under £1,000 for the ceremony, and I have had past events at the Clarendon Hotel, so I built up a relationship with the managers already.

“We paid just over £2,000 for the reception, and the hotel included a full drinks package, food and a bridal suite for us to stay in on the night, and the night before.

“They gave us full use of the main restaurant and the garden, we were lucky we could both inside and outside.” 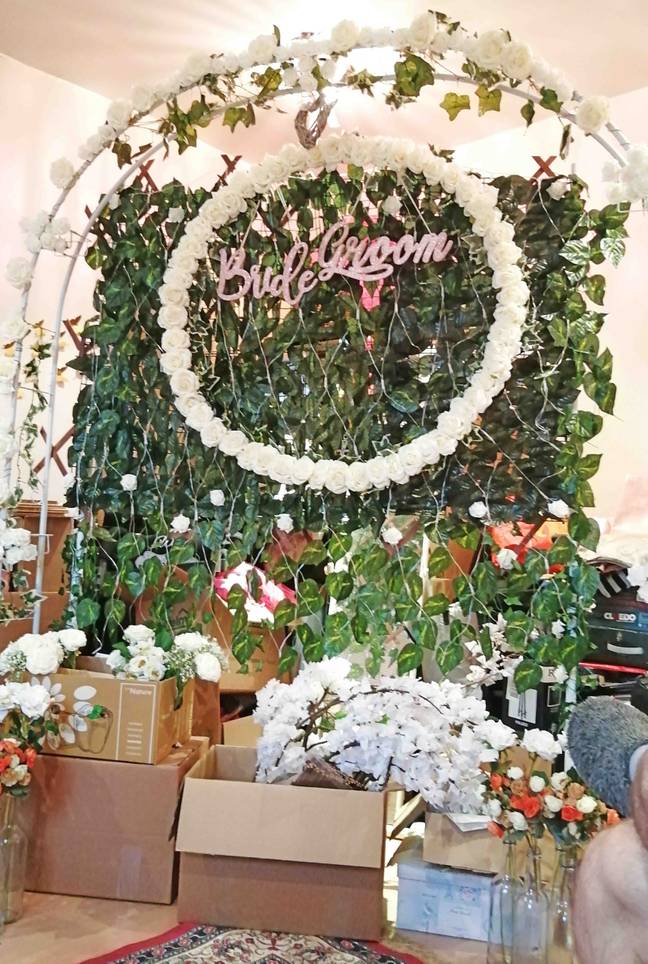 Collet explained she made a lot of the decorations by hand (Credit: Caters News)

Collet explained she made a lot of the decorations by hand, such as the flower signs, a bride and groom sign and a backdrop made with green ivy.

“We decided to have foam flowers, they look very real, and they were the best way to keep the cost down, plus they didn’t wilt in the sun,” Collet continues.

“In the reception room we had a two-seater wicker chair which was set up like a bride and groom throne, decorated with faux fur blankets and Mr and Mrs cushions.

“I put some of the foam flowers around and decorated with fairy lights as well to make it look like an enchanted garden setting.

“We went with a glamorous garden theme and had metallic wedding colours. It looked so beautiful at sunset.” 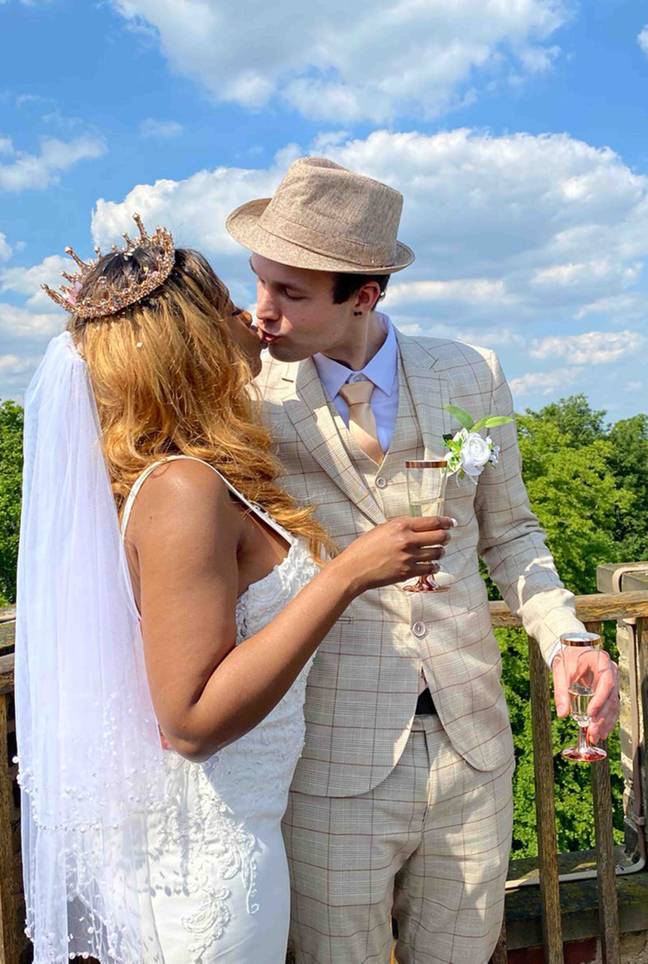 The couple were married in June 2021 (Credit: Caters News)

Collet explained how she even made the table centrepieces herself, using white tissue paper and branches.

“I collected branches from my local park, and then stuck white tissue paper around them to make them look like cherry blossom branches and these became the centrepieces on the tables,” she says.

“These were completely free, I didn’t spend a penny on them as the white tissue paper was from all of the bridesmaid shoe boxes, and dresses packaging. I already had a glue gun and glue also.

“People were so impressed with the wedding and how it was done. People were complimenting the decorations telling me it looked amazing.” 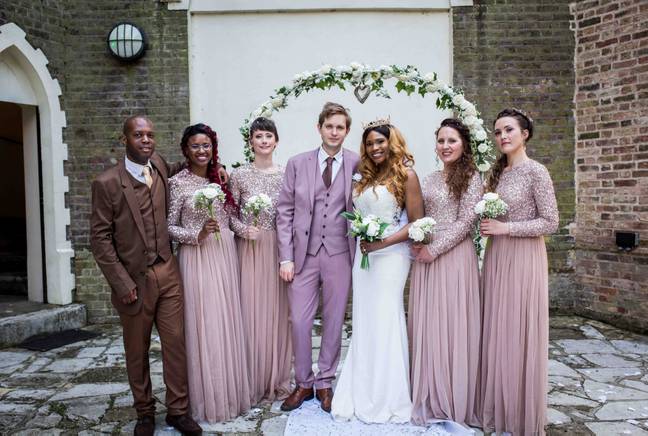 And Collet even had a brilliant idea for the wedding favours, too, thanks to her former employer.

“At the coffee chain I used to work at, where I first met Kipras, the owners helped us out with our wedding favours. They gifted everyone a fully stamped loyalty card which meant everyone was able to get a free coffee,” she says.

“I also made everyone a face scrub, made from scratch as another wedding favour. I put them in small little jars, and they all had a little label on with our names and the wedding date, as well as the ingredients.

“The jars cost me £30 for 100, and the salt, sugar and essential oils used didn’t cost me much either. In total these wedding favors came to £40.

“We also had a violinist welcoming us to the reception which made it really special. She only charged us £220, but she usually charges around £300.” 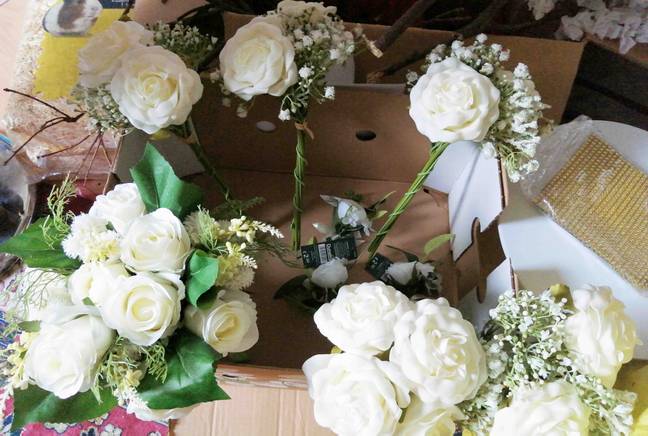 To keep on top of their spending, the couple used the website ‘Bride Book’ which broke down all their outgoings so they could keep track of how much they had spent.

Collet adds: “My wedding dress was a wedding present from my mum, it was a beautiful dress from Wed2be, and it was £599. I also had a second dress for the evening reception which was a sparkly dress that cost me £50 from a friend’s pageant dress shop, that should have been £100.

“My brother bought me my shoes, they were literally like Cinderella’s shoes, and they cost £13.50 from the shoe shop Deichmann, I knew when I saw them, they were just perfect.

“I had five bridesmaids and a man of honour, and Kipras had two groomsmen and a best girl. The bridesmaids’ dresses were sparkly long-sleeved dresses from ASOS, they were so beautiful, I paid half and they paid half for them.

“I also bought them a matching bag each, as well as a bottle of wine and some jewelery too.

“The groomsmen’s suits were from Boohoo Man for £60 each, and Kipras’ suit was also from there. He has a very particular taste, and we were lucky Boohoo Man had exactly what he wanted. It was a bargain.” 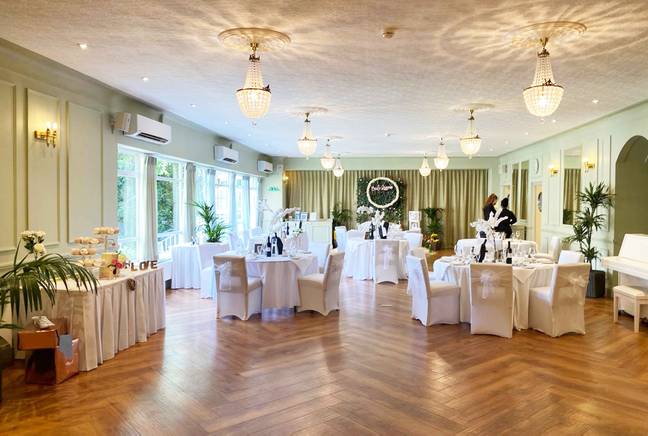 The pair paid £2,000 for the reception (Credit: Caters News)

Collet’s chief bridesmaid gifted her a hair and make up artist for the day, meanwhile a private car service for the wedding party was just £20.

“For me, my mum and my friend who was also our photographer, we just booked some nice cars at our local taxi service,” says Collet.

“This was a nightmare as only one actually turned up. I just ended up going on the taxi app FreeNow and booking black cabs.

“It was actually a really nice big spacious black cab, which cost £40 in total.”

Kipras’ mum made the couple a two tier wedding cake, meanwhile Collet’s friend, who was their wedding photographer, charged them ‘mate’s rates’ of £650 instead of £950.

“I get this money saving side from my mum. I like to get something worth a lot for a bargain. It’s how I’ve always gone through life,” says Collet.

“We were determined to keep the budget low and I’m so glad we managed to have a low budget luxury wedding that looked like it cost so much more.”