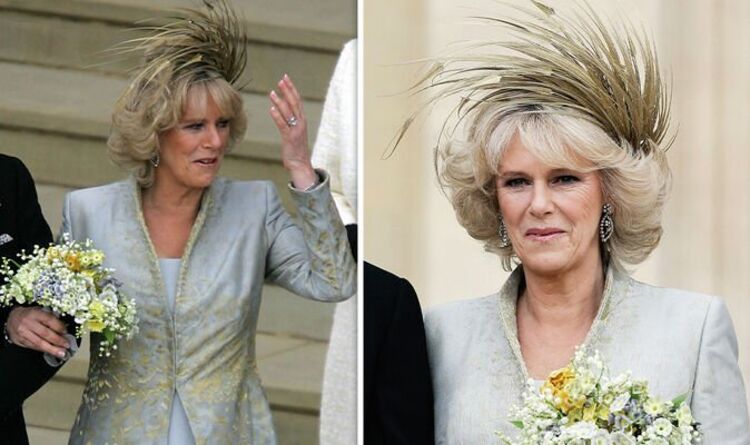 Prince Charles and Camilla, Duchess of Cornwall finally married 17 years ago after a long courtship, but the couple’s nuptials were very different from the usual royal wedding. As both Charles and Camilla were divorced, the pair opted for a civil ceremony followed by a marriage blessing, doing away with a lot of the pomp and splendor associated with royal weddings. And Camilla also opted to forego the traditional royal wedding tiara in place of a spectacular hat, followed by a dramatic headpiece.

Throughout the decades, the Queen has often lent or gifted royal brides a tiara from her personal collection to wear on their wedding days.

Most recently, the Queen lent her granddaughter Princess Beatrice the Queen Mary’s Fringe Tiara she had worn at her own wedding in 1947, and she also lent a tiara to Kate Middleton, Meghan Markle and Princess Eugenie.

But Camilla instead opted for an impressive ivory hat with elaborate detailing for her civil ceremony at the Windsor Guildhall, before changing into a headpiece with a spray of feathers for her marriage blessing at St George’s Chapel, Windsor.

The reason behind Camilla’s decision isn’t clear, but it is thought she decided against a tiara as her wedding did not take place in a church.

There is also a precedent that divorced royals who get remarried do not wear a tiara for their second ceremonies.

This was the case for Princess Anne when she married Vice Admiral Sir Timothy Laurence in 1992.

Camilla may also have wished for a change for her second wedding, and she had actually worn a tiara when she married Andrew Parker Bowles in 1973.

Camilla wore a family heirloom, the diamond-encrusted Cubitt-Shand Tiara, for her wedding day back then.

The tiara was a family heirloom that Diana’s sisters had also worn for their wedding days, and the Princess often wore it after her marriage too.

Sarah Ferguson arrived at Westminster Abbey wearing a flower crown for her wedding to Prince Andrew.

But once the ceremony was over, Sarah debuted a stunning tiara, the York Tiara, which had been a gift from the Queen and Prince Philip.