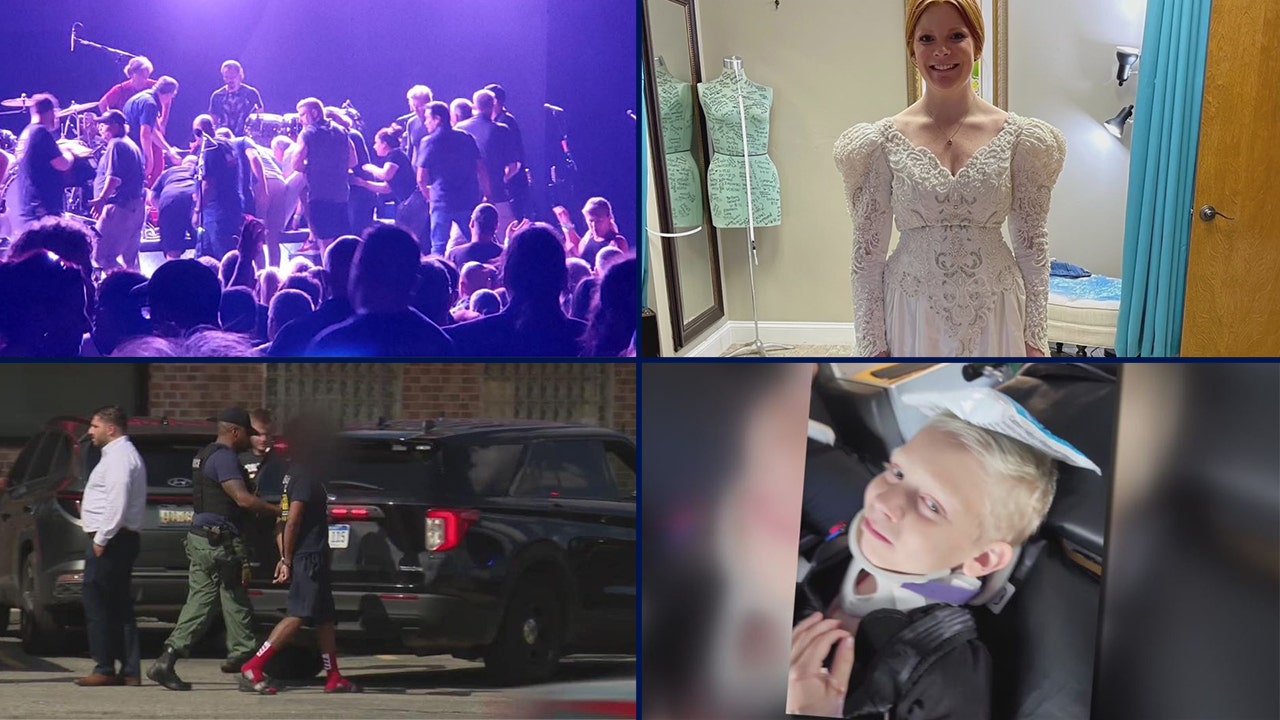 Carlos Santana collapses on stage during show at Pine Knob

WEDNESDAY NEWS HIT – Carlos Santana says he is taking it easy following his collapse at a concert at Pine Knob Music Theater in Clarkston Tuesday night.

Both the musician and the his fan page had updates regarding the famed guitarist’s condition after the scary sight, which happened about 40 minutes into his set. FOX 2 Meteorologist Lori Pinson witnessed the scene and said he was treated onstage by EMS personnel.

Later that evening on his Facebook page, Santana said he had “forgot to eat and drink water” which led to heat exhaustion and dehydration. He eventually passed out midway through the show.

“To one and all, thank you for your precious prayers. Cindy and I we are good just taking it easy,” wrote a post on Facebook. “blessings and miracles to you all.”

Santana was expected to perform alongside Earth, Wind, & Fire on Wednesday, June 6 at a venue in Pennsylvania. However, that’s been postponed to a later date, his manager said in a separate post.

“The great guitar was taken from his show at Pine Knob Music Theater (formerly DTE Energy Music Theatre), an outdoor amphitheater in Clarkston, some 40 miles northwest of Detroit, Michigan. Carlos was taken to the emergency department at McLaren Clarkston for observation and is doing well, it was announced by Santana’s manager Michael Vrionis tonight.”

The musician reportedly waved to the crowd as he was being taken off the stage. The rest of the concert was canceled, the crowd was told over the loudspeaker.

Santana was a couple minutes into a new song titled “Joy” when the incident happened, Pinson said.

“Suddenly the music just died down. I didn’t see him collapse on stage, but everyone had him off to the side,” she said. “Suddenly a chair appeared where there was not one before. The medics began to rush up on stage.”

The biggest day of Mackenzie Dancer’s life is almost here, but she still doesn’t have a dress to wear. Sure, she’s picked out the wedding gown she’ll be wearing for her wedding this weekend, but the Brighton seamstress she trusted to help her prepare the dress has disappeared.

Mackenzie Dancer said a seamstress in Brighton has canceled her appointments to pick up her wedding dress twice. Now, it’s the week of the big day, and she still doesn’t have it. Other women have shared their stories of issues with the same seamstress.

“I keep telling people this is supposed to be the happiest week of my life, but it feels like it’s the most stressed I’ve ever been,” Dancer said. “I was really excited to wear it, and it’s gone. We don’t know where it is, if she has it, the state of the dress.”

Dancer chose Alterations Unlimited in Brighton based on recommendations from a family friend. But recently changed ownership of the company has become a problem. Not just for dancers, but three other women as well. Some dresses arrived only days before a destination wedding, Another needed help from another seamstress.

Jasmine Hollon, who owns Alterations Unlimited responded to FOX 2 over text that she had been dealing with a family emergency and “guaranteed” the bride’s dresses would be “100% perfect.” “I guarantee that. I have never not gotten a bride in 28 years. Never had a bride not have her wedding dress on her wedding day,” she said.

A criminal suspect was tracked down and arrested at the Firing Line gun store and shooting range in Westland Tuesday night. It was a team effort between the Detroit and Westland police, acting on a tip – officers positioned themselves and then waited for the right time to act.

It was around 4 pm when Randall Weddle noticed something was happening at the business next door at the Firing Line. “I kept noticing all the police cars and undercover cars moving around,” said Weddle, Ameristar Auto Outfitter. “I wasn’t quite sure exactly what was going on but I figured something was going to happen.”

As soon as the suspect emerged from the gun shop – they moved in and arrested him in the parking lot without incident. Sources tell FOX 2 he was wanted for a felonious assault out of Detroit. According to the owner of the Firing Line, the suspect was teaching a private lesson at the firing range. At no time was anyone in danger, the owner said.

As soon as the suspect emerged from the gun shop – they moved in and arrested him in the parking lot without incident. Sources tell FOX 2 he was wanted for a felonious assault out of Detroit.

“Knowing the folks who work next door here, they are very good people and they would never put anyone in jeopardy,” Weddle said. Police were able to make the arrest, and impound the vehicle without anyone getting injured.

Read more about when police confronted the suspect here.

A camping trip left an 8-year-old boy and his family devastated and terrified. Hunter Graham’s father says a large tree fell on his son Saturday. He’s continuing treatment at Detroit Children’s Hospital of Michigan for a brain injury.

“He’s just a wholesome, humble child, and he loves the outdoors – he loves the fishing and hunting,” said Bryan Graham, his father. The incident happened over the 4th weekend of July when the family went camping at Ruby Campground in Avoca in St. Clair County.

A camping trip left an 8-year-old boy and his family devastated and terrified.

The crash happened an hour before the family was going to celebrate Hunter’s 8th birthday. Bryan says the tree came crashing down in seconds. “It was like trying to jump in front of a bullet and not getting there in time,” he said.

“The tree landed on the top portion of his head and across his chest. When I was finally able to get to him to get the tree off it was laying across the center section of his body,” Bryan said. Meanwhile, the community has already stepped up to help. Campers at Ruby Campground collected donations and the family set up a GoFundMe page. If you would like to help, donate HERE.

Read what the owners of the campground said here.

An irate woman chased a group of landscapers with her car in Southfield Tuesday, leading to her pinning one against a house, before physically assaulting him. The photo of the aftermath shows the car and the brick wall damaged.

The 50-year-old woman from Dearborn allegedly told the landscapers they wouldn’t fix her lawn because she was African American, a witness said. From there, the woman peeled onto lawns, chasing the guy, then smashing him against the bricks of a house. He wiggled free, then she got out and started pulling his hair.

A crew of landscapers were working in a Southfield yard off Hilton Road when an irate woman chased them in her car and eventually pinned one of them to a house before physically assaulting him Tuesday.

Police and EMS were there in minutes. The 32-year-old landscaper from Warren, taken to the hospital where he suffered a broken pelvis and other leg injuries.

“This is definitely not an accident – I want to make that clear this was not an accident – this was intentional but we don’t know the reason for that intent,” said Deputy Chief Aaron Huguley, Southfield police. It’s unclear why she was in the neighborhood in the first place.

What else we’re watching

Temperatures are cooling off Wednesday and, after some morning showers, it should be an uneventful day weather-wise. Plan on the low 80s for temps and a mostly cloudy sky.

The last surviving member of the 101st Airborne Division’s Easy Company, which was made famous by the HBO miniseries “Band of Brothers,” has died.

Freeman was assigned to the US Army’s Easy Company, 2nd Battalion of the 506th Parachute Infantry Regiment of the 101st Airborne Division in 1944 and was a mortarman.

“He (Freeman) was in every major engagement in Europe during World War II,” Rufus Ward, a historian and 43rd FTS honorary commander, told Columbus Air Force Base during a 2020 interview. “He’s a true American hero and we need to honor those people … we owe them more than we could ever repay them.”