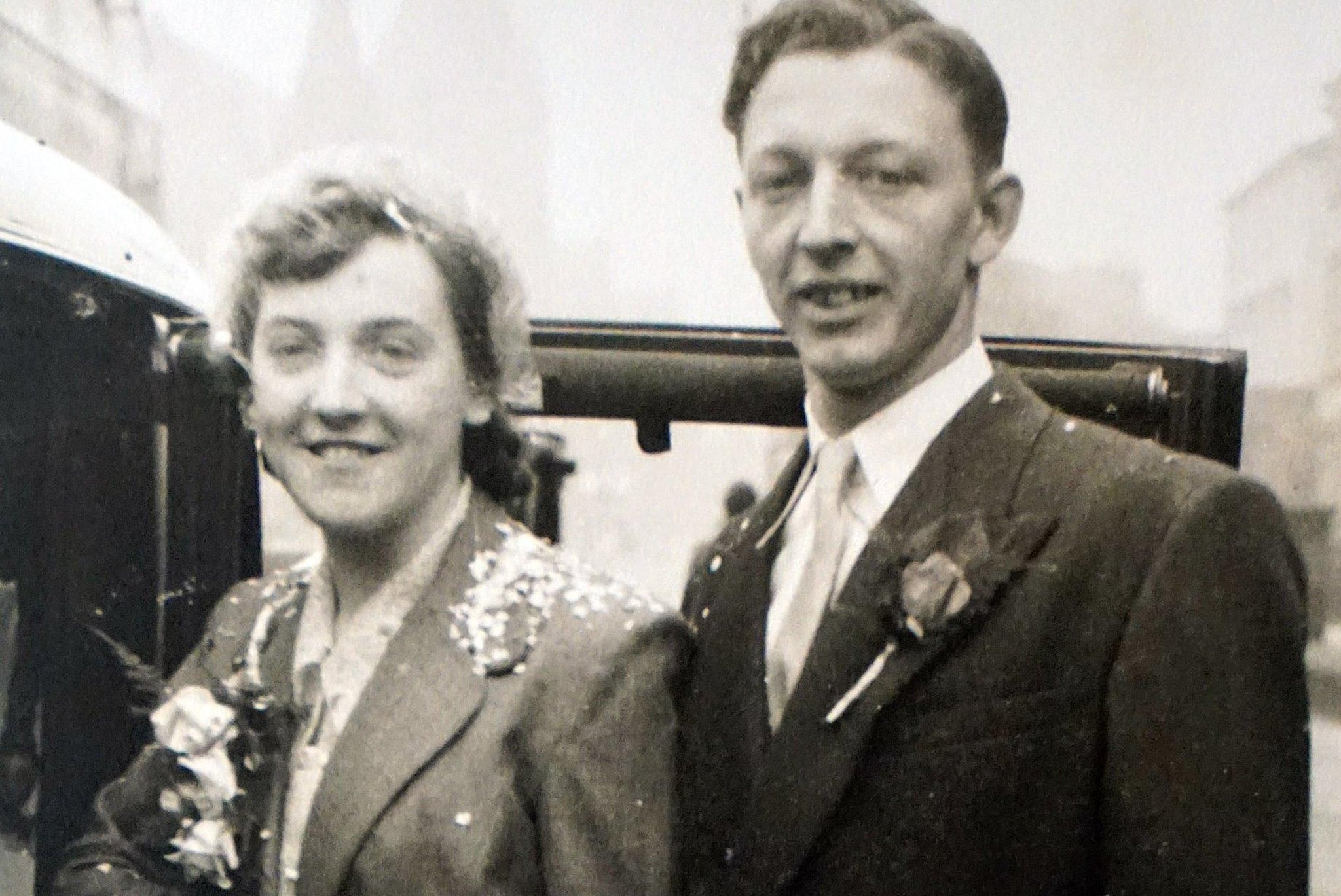 Jim and Peggy Coupe were on honeymoon in London after marrying three days before Elizabeth II’s accession to the throne.

Peggy said: “We were standing in a crowd outside Buckingham Palace when the Queen came out onto the balcony. Everybody started rushing to the gates and my husband said ‘keep running’ because we were frightened of getting crushed or trampled.”

Despite the safety fears, Peggy said she enjoyed the momentous occasion: “It was a beautiful day. I saw all the horses – it was lovely.”

Peggy and Jim Coupe on their wedding day in 1952.

The newly-weds had gone to London with just £40 spending money for the week. Peggy said: “We stayed in a little hotel in Russell Square and ate lunch at Lyon’s Corner House every day.”

For their platinum wedding anniversary, Jim, 93, and Peggy, 91, will be treated to a surprise by their nearest and dearest as well as a family holiday in Majorca. The couple, who live in Loundsley Green, have visited America, Italy and Spain over the years.

They have a daughter Jill, granddaughter Naomi, grandson Jonathon and great-granddaughters Isabel and Emilia.

Peggy said: “I love family life. My happiest memories are when Jill was born and then my grandchildren.”

Jill said: “When I had my children my mum and dad looked after them a couple of days a week and when they were well into their 80s they looked after their oldest great-granddaughter Isabel.”

Both Peggy and Jim hail from Manchester and have lived in north Derbyshire for more than 60 years. They made their home in Inkersall before moving into a newly-built house in Chesterfield 27 years ago and have lived there ever since.

The youngest of four girls, Peggy was named Olga, which she hated so chose a derivation of her middle name Margaret.

Peggy was a child when war broke out and recalls sheltering in the cellar of her family’s home during bombing raids. She was nine when she lost her mum from a heart condition and was raised by her gran.

Jim, who had a sister, had just finished National Service with the Army when he met Peggy for the first time in a milk bar in Manchester. He was 20 and she was 18.

Their first date was a hike in the Peak District. Peggy said: “We took a packed lunch, caught the bus and went climbing on Kinder Scout although we didn’t climb it all.”

They got engaged after an 18-month courtship and tied the knot at The Holy Name Church, Chorlton on Medlock on May 31, 1952.

Peggy said: “We didn’t have fancy cars, just taxis. I got into a taxi with my dad and on the way to the wedding the taxi ran over a dog and killed it. The driver picked up the dog and put it in a garden because you didn’t have to report it then. It was awful – it upset me.

“On our wedding day we went to Smallman’s cafe where there was a set meal – ham, salads and trifle – and we had a knees-up with a dance band.”

After their honeymoon Jim joined Peggy in their family home at Longsight and they lived there for five years until Peggy’s dad passed away at the age of 66.

By that time Peggy’s sister Jean was living in Chesterfield and the couple decided to sell up in Manchester and move to Derbyshire. Peggy said: “Jim was an apprentice in coach-building and the wages were very low. He decided he wanted to come to the pits because the miners were making quite a lot of money, but he couldn’t get into the pits because he wore glasses.”

Jim secured a job at Chesterfield Cylinders where he worked his way up to supervisor during a 30-year career.

Peggy made boxes at Robinsons for a couple of years before she gave birth to Jill. When Jill was 12, her mum returned to Robinsons where Peggy’s sister was a supervisor at the Chesterfield factory.

Peggy worked part-time for a further 10 years at Robinsons before retiring at the age of 58. She said: “I finished at the same time as Jim retired and we went here, there and everywhere.”

Jill said: “My dad still drives and they do bits of gardening and cooking. My mum was a very good baker and always loved cooking cakes.”

Asked what her recipe for a long marriage is, Peggy said: “Be happy. Help each other and look after one another – that’s all we’ve ever done.”

Like much of the nation Peggy will tune into the television coverage of the Queen’s platinum jubilee celebrations on June 2 – and will no doubt be looking back fondly on a highlight of her honeymoon in 1952.