Cleaning products could expose people to pollution at the same rate as cars, study says 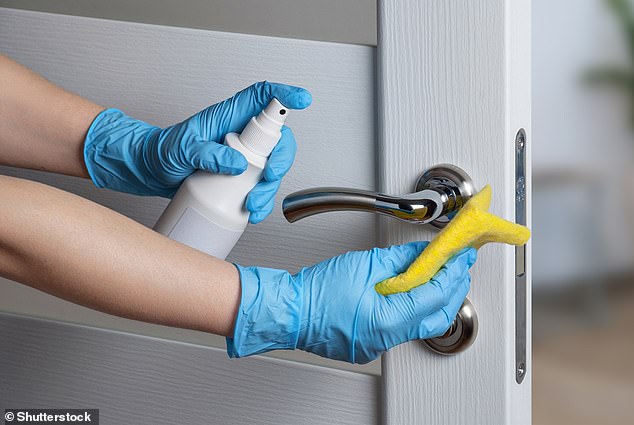 Cleaning products have become more ubiquitous than ever in the last two years, but a new study suggests their use may come with a health risk.

Researchers in the US have performed real-time observations in ‘realistic indoor conditions’ that mimic the work of indoor professional cleaners.

Commercial cleaners for sanitising indoor surfaces may deposit small pollutant particles into human respiratory tracts at rates equal to or higher than aerosols from vehicles, they found.

The new findings may have implications for people who have worked heavily with disinfectant sprays during the Covid pandemic.

The new findings, published in Science Advances may have implications for people who have worked with disinfectant sprays during the Covid pandemic (stock image)

In 2017, the UK population emitted around 60,000 tonnes of VOCs from aerosols but only around 30,000 tonnes from UK cars running gasoline.

But even accounting for all forms of road transport in the country – not just cars, but motorbikes, vans, lorries and buses – aerosols still emit more VOCs, the authors said.

The study has been led by Colleen Rosales, an environmental scientist at University of California, Davis and published today in Science Advances.

‘One perturbation that humans introduce to the indoor environment is the use of household cleaning and disinfection products, some of which have “natural” scents, such as citrus or pine,’ Rosales and colleagues say in the paper.

‘Workplace and residential exposures resulting in adverse health effects are likely to be influenced by increased chemical disinfection of indoor surfaces during the coronavirus disease 2019 pandemic.’

Scientists have known that cleaning indoor surfaces with disinfectants can generate secondary indoor pollutants as gases and aerosols.

But there have been few studies capturing secondary organic aerosol formation in realistic indoor conditions.

A secondary organic aerosol (SOA) is a molecule produced via oxidation over several generations of a parent organic molecule.

‘SOA accounts for a major fraction of the global atmospheric aerosol burden,’ said Professor Annele Virtanen, an atmospheric scientist at University of Eastern Finland, who was not involved in the study.

‘Understanding the mechanism of formation and the properties of SOA is therefore important to estimate its effects on climate, air quality, and human health.’ 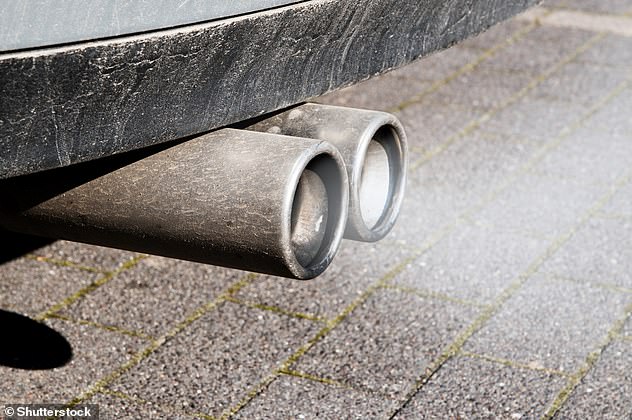 Road transport is a source of both greenhouse gases and air pollutants, being responsible for significant contributions to emissions of carbon dioxide, nitrogen oxides and tiny particulate matter

Volatile organic compounds (VOCs) are emitted as gases from certain solids or liquids.

VOCs include a variety of chemicals, some of which may have short- and long-term adverse health effects.

Concentrations of many VOCs are up to ten times higher indoors than outdoors.

VOCs are emitted by a wide array of products numbering in the thousands.

Sources of VOCs in the home include aerosol sprays, cleansers and disinfectants, moth repellents, air fresheners and automotive products.

Other sources include building materials and furnishings, office equipment such as copiers and printers, permanent markers, correction fluids, carbonless copy paper and craft materials including glues and adhesives.

To learn more about SOA formation indoors, the US team focused on monoterpenes, a class of volatile organic compounds (VOCs).

Monoterpenes are released from a very wide range of sources including cooking, foodstuffs, plants and multiple kinds of fragranced products.

In an indoor setting, monoterpenes can mix with ozone to form particles that may bury inside the lungs.

The team used a commercial monoterpene-based household cleaner to mop surfaces inside an enclosed, mechanically ventilated test room within a research building in a forested area for 12 to 14 minutes.

As the floor was mopped, the researchers measured gas-phase precursors, oxidants, radicals, secondary oxidation products, and aerosols in real time.

They calculated that a person using a monoterpene-based cleaning product would first inhale about 30 to 40 micrograms of primary volatile organic compound per minute as they begin mopping.

As secondary organic aerosols form when the product interacts with the air in the room, the person would then inhale about 0.1 to 0.7 micrograms of these particles per minute.

The authors suggest that maintaining indoor background ozone levels below 1 part per billion before mopping could minimize the buildup of pollutant particles. 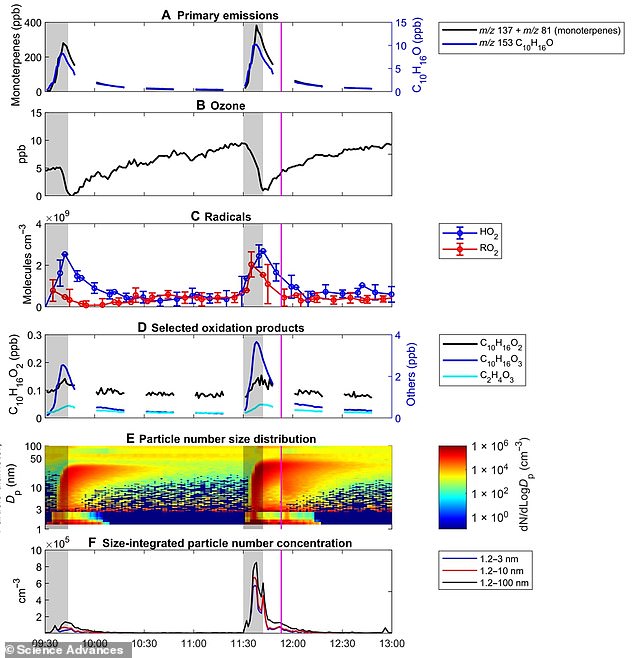 As the floor was mopped, the researchers measured gas-phase precursors, oxidants, radicals, secondary oxidation products, and aerosols in real time. In these graphs, gray shading corresponds to active periods of mopping and wiping during the cleaning events

VOCs that are currently being used in aerosols are less damaging than the ozone-depleting chlorofluorocarbons (CFCs) they replaced in the 1980s.

CFCs, which are classified as halocarbons, damage Earth’s protective ozone layer that shields us from harmful ultraviolet rays generated from the Sun.

Recognizing the danger of CFCs, the Montreal Protocol was agreed in 1987, which led to their phase-out and, recently, the first signs of recovery of the Antarctic ozone layer.

Household aerosols including deodorants and cleaning sprays release more harmful smog chemicals per year than all the VEHICLES in the UK, scientists warn

In 2017, the UK population emitted around 60,000 tonnes of VOCs from aerosols but only around 30,000 tonnes from UK cars running gasoline.

But even accounting for all forms of road transport in the country – not just cars, but motorbikes, vans, lorries and buses – aerosols still emit more VOCs, the experts say.

VOCs are a large group of odorous chemicals, many of which are released by cleaning and beauty products, burning fuel and cooking.

Exposure to some VOCs has been linked to term chronic health effects, including lung conditions, liver and kidney damage, nerve problems and cancer.

‘Virtually all aerosol based consumer products can be delivered in non-aerosol form, for example as dry or roll-on deodorants, bars of polish not spray,’ said study author Professor Alastair Lewis from University of York’s Department of Chemistry.

‘Making just small changes in what we buy could have a major impact on both outdoor and indoor air quality, and have relatively little impact on our lives.’