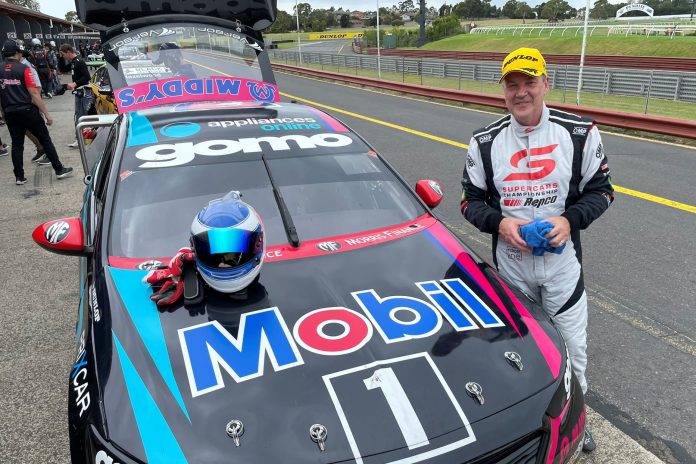 Neil Crompton wiped his helmet off today to get behind the wheel of a supercar, punctuated by an “authentic experience” with Anton De Pasquale.

The supercars was invited by Walkinshaw Andretti United to drive one of its Holden ZB Commodores for a day of driving at the Sandown International Motor Raceway.

The full-time employees Chaz Mostert and Bryce Fullwood were eliminated in the starting numbers 25 and 2, with the co-drivers Lee Holdsworth and Warren Luff sharing the driving duties.

Kurt Kostecki was also there for the day of driving and shared the team’s replacement ZB Commodore with Crompton. It is believed that Kostecki could make a wildcard cameo with the team later that year.

It was a full return for Crompton who was cheekily dusted off by Shell V-Power Racing Team driver De Pasquale.

“It was a ball, I absolutely loved it,” Crompton told Speedcafe.com.

“I got a correction from Anton, which made it even more fun. I thought it was Will [Davison] in the car at # 17.

“I looked away as we rolled down the straight and started figuring out where to brake. I thought he would keep sailing.

“I was obviously starting to think about where I was turning and didn’t know that he had actually stabbed the nose. In the next minute, I’m completely across the street and he tagged me.

“There’s a large witness sign in the left rear door, and the exhaust is down a little. I thought: “Jesus, we have contact on a day of driving!” So it was an absolutely authentic experience.

Driving day was the first time in over 12 months that some teams were able to drive hot laps in Victoria.

Crompton said the atmosphere in the pit lane was lively. For Crompton, most of the passengers he took for hot laps were first-time visitors.

“It was fantastic, I absolutely loved it,” said Crompton.

“It’s been 12 months since I’ve been in one, but every time you’re in one, as you get older, it’s a privilege.

“I told the team a few moments ago that I thanked them for their trust because it was a lot of expensive equipment. Just to be able to do it, I’m happy.

“I did three or four chunky stints today, so I feel like I did a little. The camaraderie was great. It was great to see everyone on a day like this where you can share the love of games with so many people.

“It was like a race meeting. There was traffic out there. When you’re not on the money it felt like I was in a class car. I just had to be very careful which way I got in.

“It was busy out there.”

Crompton anticipates getting out in a supercar again later this year.