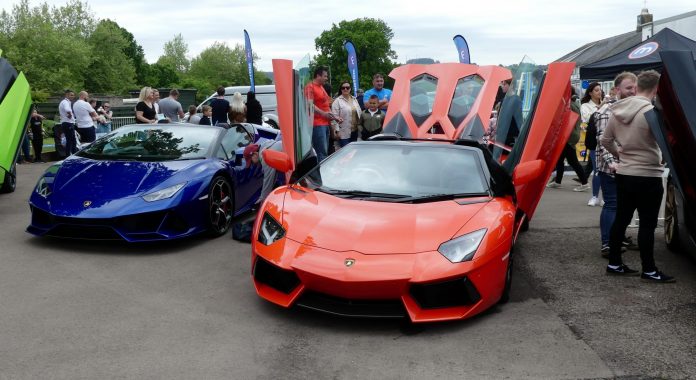 CLASSIC and super cars stretched for almost as far as the eye could see when thousands of people descended on Chepstow Racecourse for the annual South Wales Car Show.

The event, in aid of Newport-based St David’s Hospice Care, was sponsored by Motorpoint and St Joseph’s Hospital.

It was staged for the first time last year and was an even bigger success this time around.

Cars from Ferraris to a Trabant, Porsche to Ford and almost everything in between, covered almost the entire racecourse public area. And the car buffs and show goers could get up close to all of them, even the Lamborghinis and other super cars.

A stage provided live music while stalls and entertainment kept families and car buffs happy from the 10am start to finish at 4pm.

Stuart Hammond, CEO of Newport-based St Joseph’s Hospital, which recently celebrated 75 years since its foundation, said: “We were delighted to sponsor the car festival again this year. The turnout from the 500 cars and the support from the people that attended what awesome.”

Beth Harrington, of St David’s Hospice Care, said: “We were extremely grateful for the wonderful support we received from St Joseph’s Hospital and Motorpoint. We are also humbled not just by the car owners who turned up in the hundreds but also all the people who throned to the show from the word go which all helped make the event such a brilliant success.

“The show offered a dazzling array of vehicles on display as well as bars, street food, a kid’s corner, funfair, live music, entertainment, VIP area, crafts stalls, local produce and more. It was a great day out, in a fabulous setting, enjoyed by everyone.”