Exclusive: next Land Rover Discovery will be mid-engined sports car 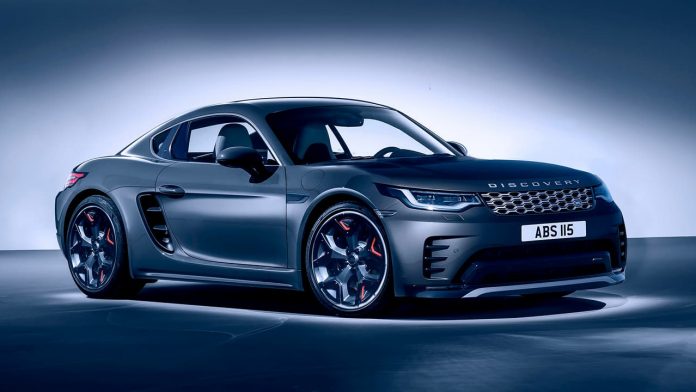 As every sports car maker guns for SUVs, Land Rover fights back with a Cayman killer

Today, British 4×4 specialist Land Rover has announced the next Land Rover Discovery will be a lightweight sports car.

Tired of all the traditional sports car makers – Ferrari, Lamborghini, Alpine, Aston Martin and now even Lotus – muscling onto its patch with big lifestyle SUVs, Land Rover has decided to beat them all at their own game.

“We reckon there’s a real gap in the market for Land Rover to deliver a purists’ driving machine,” a Land Rover spokesman told TopGear.com.

“As all of the sports car brands scramble to copy our Range Rover Sport, we’ve calculated sales of a halo sports car could top almost eight units per year, making it twice as popular as the Evoque Cabriolet.”

So why the change of direction for the deluxe Disco-4×4?

“Turns out no-one really wanted a massive, wonky-arsed, school run tank. But we realized if we just flipped the platform around, we had the perfect basis for a mid-engined, 4WD sports car. With a wonky face.”

Land Rover HQ has secured government permission to concrete over its local Cotswold off-road trails to build a private test track for shaking down its new 911 chaser. “We looked into hiring Silverstone, but it was block-booked by Aston Martin desperately trying to make a DBX out-lap a Valkyrie,” claimed a source.

“We’ve also recoded our usual Terrain Response software so that instead of setting the car up for whatever surface it’s on, the new Discovery will wildly oversteer even in a straight line. People who are definitely going to buy this model with real money are fed up with all these safe, user-friendly, reliable modern sports cars.”

The new Discovery aims to launch on April 1st next year, in time to battle Singer’s reimagined Cayenne. “It’s been a real challenge for us,” admitted Land Rover. “It’s taken us since Christmas just to get the rear numberplate in the right place.”

Thank you for subscribing to our newsletter. Look out for your regular round-up of news, reviews and offers in your inbox.

Get all the latest news, reviews and exclusives, direct to your inbox.