Home Supercars Holdsworth: As long as I'm fast, I want to stay in Supercars
Supercars

Holdsworth: As long as I’m fast, I want to stay in Supercars 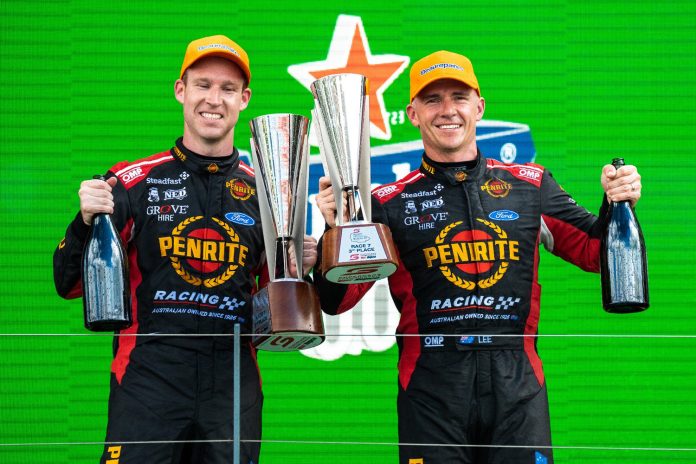 Grove Racing’s Lee Holdsworth had signaled his desire to stay on the Supercars grid as long as he is performing up the front.

The #10 Penrite Racing driver enjoyed a fruitful most recent round at Winton Motor Raceway, recording finishes of fifth, fourth, and sixth.

Although it’s been an up-and-down season so far, Holdsworth has proven he has pace to match his team-mate David Reynolds and race towards the pointy end.

While Holdsworth only has one podium to Reynolds’ six thus far, the 39-year-old has enjoyed the seven top 10 finishes he’s had to date.

It’s little secret Grove Junior Matthew Payne is a front-runner to step up from the team’s Dunlop Super2 Series program and into the 2023 Repco Supercars Championship.

Holdsworth has nevertheless made a strong case for why he should still be on the grid. Both he and Reynolds are off-contract at season’s end.

“Certainly, if you’re performing well you want to stick at it,” Holdsworth told Speedcafe.com.

“But as long as I’m running up the front, I’d like to stay in the game.

“If results aren’t coming, then I’m more than happy to step aside and see some young guys come through.”

Indeed, Chaz Mostert heaped praise on Holdsworth after his involvement in their 2021 Bathurst 1000 win with Walkinshaw Andretti United.

That result would prove the difference in Holdsworth returning to the championship full-time this year.

“Things can change pretty quickly in our sport,” said Holdsworth of his Bathurst 1000-winning effort.

“You need consistency, you need performance, you need speed, and you should be in demand then.

“They’re the things you’ve got to tick off and if you’re doing that, you shouldn’t have too many worries.”

With the year approaching its midway mark and contract talks looming, Holdsworth isn’t fazed by the impending silly season.

“I’m just head down, bum up at the moment trying to get results – the best results I can for the team,” he added.

“I just feel that everything else will always work itself out if you’re performing, so I’m not too stressed about it.

“There will come a time soon where we will have that sit down and work out what’s going on next year, but at this point it’s probably too early to be having that talk.

“So yeah, that’s where we’re at at the moment.”

Round 6 of the 2022 championship takes place this weekend, June 17-19, at Hidden Valley Raceway.