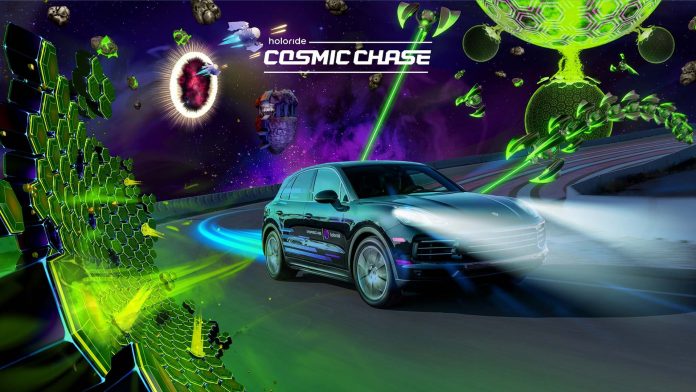 Some of the opportunities that come MotorTrend’s way sound better than they turn out to be. We weren’t considering that fact when we accepted Porsche’s invitation to be one of the first to sample its Cosmic Chase virtual reality video game at the company’s Carson, California-based Porsche Experience Center. But a few days later as we drove to the PEC to try it out, we began to think it sounded like a recipe for boredom, disaster (of the motion-sickness kind), or both. Frankly, we were unclear what we were even in for, but the agenda turned out to include nothing but quick and easy fun.

It’s understandable if the idea of ​​playing a first-person-shooter video game with a VR headset strapped over your face—while sitting in the back seat of a moving Cayenne S SUV as an instructor drives it around the PEC road course—sounds to you like nothing but a rolling barf bag. The fact that it isn’t notable, and it has potentially large implications for near-future in-car entertainment tech.

“The breakthrough was basically taking software that picks up the motions of the car and anticipates how it’s moving and modifying this for [entertainment]-content purposes,” says Nils Wollny, CEO and co-founder of Munich-based startup Holoride, the company behind the underlying technology. “So that’s why you have a very, very low latency because it’s reacting super quick to what happens in the car, in the central computing entity of the car. Signals are sent [from the car]and our software reacts immediately, almost in real time.”

What exactly is Cosmic Chase? Think of it as a similar experience to some of the movie-themed rides at amusement parks like Universal Studios. It’s a simple game: You find yourself as an Earth Alliance fighter pilot, dogfighting to save humankind from an attacking alien force called the Cymex. Rather than riding in a roller-coaster-style car along a track as the action unfolds around you (Transformers: The Ride 3D is a prime example), the moving Cayenne takes on the role of coaster car.

The VR headset offers a near-full field of view as you wield a controller, and you might legitimately believe you’re flying through space. If the Cayenne turns left on the racetrack (actual rolling speeds are quite low, and you won’t hear any tire squeal), your virtual ship matches the motion perfectly in the game, banking in the same direction past asteroids and charting a course through the expansive battlefield. Using your head and eyes to aim your sights at the enemy force, pull the trigger on your controller to unleash your arsenal and destroy as many Cymex ships as you can. The more points you rack up, the higher you’ll rank on the game’s leaderboard displayed inside the Porsche Experience Center. One play/ride of Cosmic Chase takes about 10 minutes to complete and costs $49.

Developed in conjunction with Pittsburgh-based Schell Games, the brilliance of the tech behind Cosmic Chase is, as Holoride boss Wollny noted, the near-instant real-time coordination between the game’s software and the live vehicle data such as steering, acceleration, and braking it relies upon to produce a seamless player experience that feels almost real. This is also why, according to Holoride, motion sickness is no more of a concern using this platform than it is with any other amusement park ride experience. Once we experienced it firsthand, it all made perfect sense and exposed our initial misgivings as laughably unfounded.

What does blasting imaginary aliens have to do with Porsche, though? For now, Cosmic Chase is a fun offering the company hopes will entice more families and younger people to visit its Los Angeles Experience Center, where they might also learn about the marque and take a newfound interest in the brand. If Porsche deems the attraction a success, it might very well introduce it at its other PECs around the world.

In the bigger picture, Holoride is working toward integrating its tech into various manufacturers’ road cars, including Porsche, and working with gaming and entertainment studios to develop software with the potential to revolutionize in-car passenger entertainment, wellness, and perhaps even mobile workplace solutions, be it via VR headsets or their personal mobile devices. We expect to hear more from Holoride soon, but for now, if you’re in the Los Angeles area and looking for a fun, unique Porsche experience that doesn’t cost a fortune, we recommend taking your shot at Cosmic Chase. Both adults and teens (riders must be at least 13 years old), especially gamers, will love it—we sure did. You can book your session(s) by emailing PECLAinfo@porsche.us or calling 888-204-7474.