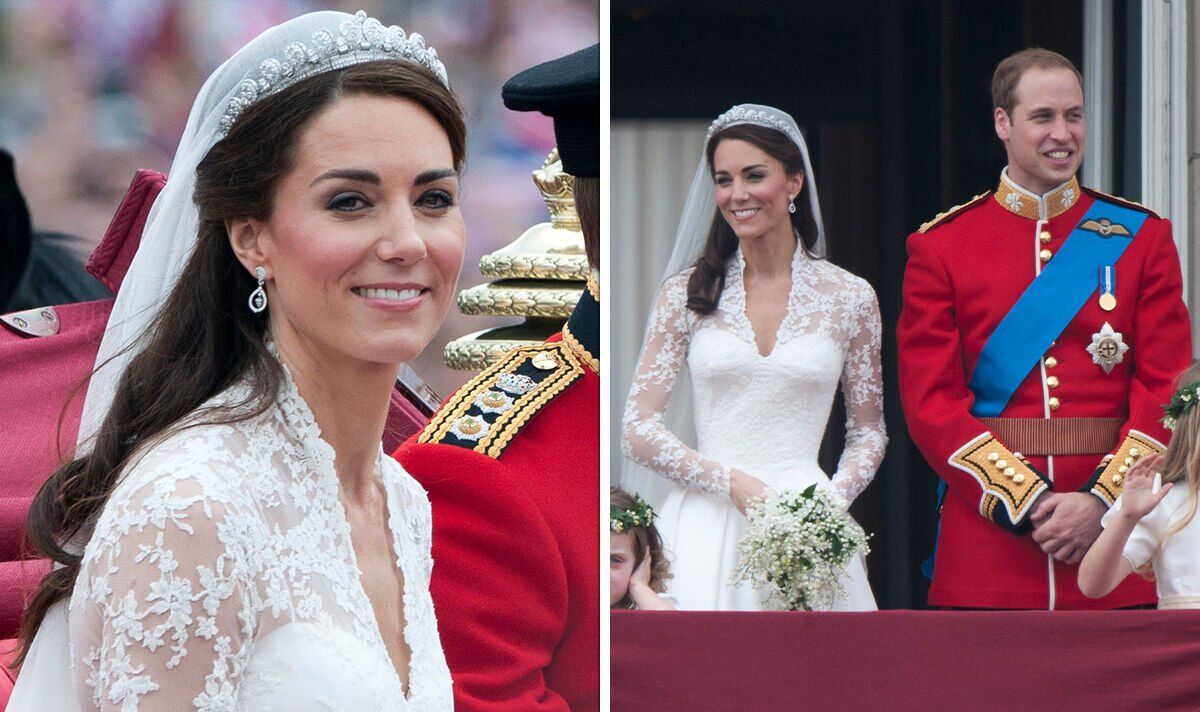 The Duke and Duchess of Cambridge got married in 2011 at Westminster Abbey. Kate wore a beautiful long-sleeved Alexandra McQueen dress with a handmade lace bodice and a nine-foot-long train. However, the gown wasn’t the most unique part of Kate’s look. Her hair was.

Kate opted to style her long brunette locks in a half-up, half-down do for her special day.

Her hair was in a side parting and tied in a tidy half-updo at the back of her head.

The part of her hair which was left down over her back was styled in natural-looking waves.

The Duchess’ hairstyle might not be surprising or unique on a day-to-day basis, but it was when it came to royal weddings.

She continued: “However, Kate had her heart set on wearing her hair down with long flowing curls, which is her favorite way to wear it, and actually William’s favorite as well.

“They ended up compromising on her look.”

The compromise was of course the half-up, half-down do, but Kate seemed to get her own way during the second part of her wedding day.

For the wedding reception, Kate restyled her hair by letting it all down over her shoulders in loose curls.

The Duchess’ locks complimented her more relaxed dress for the evening reception – which was a white strapless satin gown with a diamond belt around the waist.

She completed the look with a white cropped fluffy cardigan.

According to royal tradition, female members of the Royal Family who have long hair are advised to pin their hair up on their wedding day, but those with short hair have been allowed to let their hair down.

The Queen and Princess Diana had their locks down, resting on their shoulders, on their respective big days, while Princess Margaret had her hair pinned up.

Since Kate’s wedding, other female members of the Royal Family with long hair have followed in the Duchess’ footsteps.

Princess Beatrice, who married Edoardo Mapelli Mozzi, did so with her hair in a half-up, half-down do.

Her fringe was also styled in a side parting like Kate’s, held in place by the Queen Mary diamond fringe tiara, which was also worn by Queen Elizabeth II on her wedding day.

Beatrice’s dress was a vintage gown by Norman Hartnell, on loan from the monarch.

It was made from Peau De Soie taffeta in shades of ivory, trimmed with ivory Duchess satin, with organza sleeves.

It also featured diamanté beads and a geometric pattern on the bodice.