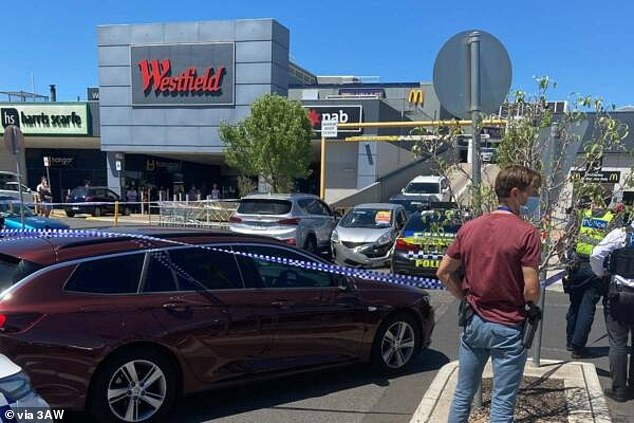 An allegedly stolen car driven by a man and a woman rammed into three police cars and an officer at a shopping center in Melbourne.

The vehicle smashed into the police vehicles at the Westfield in Airport West, injuring the legs of one officer just before midday on Thursday.

A man and a woman have been arrested over the incident.

Police had been called to the carpark on Louis Street over reports of a suspicious vehicle after a stolen 4-wheel drive and a stolen white van were used in smash-grab burglaries at Glenroy and Fawkner on Wednesday.

The man and woman also were allegedly involved in another burglary at a computer store in Altona North at about 2am on Thursday.

‘A police officer has been injured and three police cars damaged after the offenders continued to ram the police vehicles as officers moved in to make their arrests,’ they said in a statement.

‘The man has been taken to hospital with minor injuries and the woman is assisting police with their enquiries.’

A witness of the incident said they saw the vehicle speeding down the ramp before smashing into the police cars.

‘All of a sudden this car comes driving down the ramp and tries to ram through the cop cars,’ witness Chris told 3AW.

‘It was unsuccessful and kind of hit a couple of cops in doing so, then they reversed again and then tried to ram through the middle of the cop cars again.

‘After that seven or eight cops jumped on the car and tried to smash the windows and pull them out.’