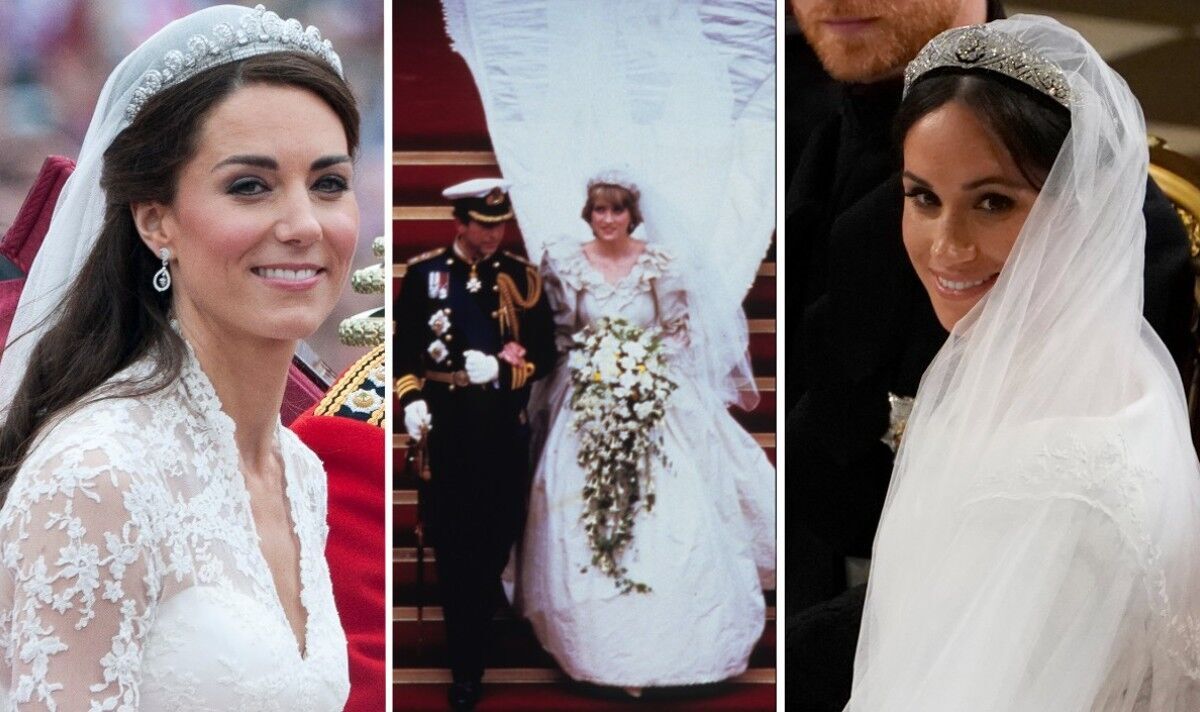 From Kate Middleton’s Alexander McQueen lace gown to Camilla Parker Bowles’ Robinson Valentine blue-gold damask dress coat, members of the Royal Family have worn stunning wedding dresses over the last century. But whose dress was the most popular in 2021, according to Google data?

Looking at global monthly Google searches, experts at Wealth of Geeks have calculated which wedding dresses were the most popular among the public last year.

Topping the list is Meghan Markle, the Duchess of Sussex.

The 40-year-old’s wedding dress, on average, pulled in a whopping total of 51,000 Google searches a month, making it the most searched-for royal dress of 2021.

Meghan beat the likes of Kate, Princess Eugenie, Princess Beatrice, and the Queen.

For her big day on May 19, 2018, the Duchess wore a custom-made Givenchy dress by designer Claire Waight Keller.

The dress was simple but beautiful, featuring a wide neckline showing off Meghan’s collar bones, and long sleeves.

It also had a long veil, which was kept in place by the Duchess’ tiara.

As for her hair and make-up, Meghan’s dark brown locks were tied in a low bun and she wore subtle dark eye make-up and a little bronzer.

Interestingly, Meghan’s dress had 4,000 more monthly searches than the second most popular dress – which was Kate Middleton’s gown.

The Duchess of Cambridge wore an Alexander McQueen dress with a flowing skirt and a long-sleeved, lace bodice.

She also wore a veil and a tiara, and the dress featured a long train.

Kate wore heavy eyeshadow on her big day and her hair was styled in natural-looking waves down her back.

Princess Diana’s dress pulled in an average 30,000 monthly searches, 40 years on from her wedding to Prince Charles in 1981.

Elizabeth’s gown had an average of 7,700 Google searches a month.

The monarch wed the late Prince Philip in 1947 in a dress designed by Norman Hartnell.

A spokesperson for Wealth of Geeks commented on the findings, saying: “Meghan Markle has been a fashion icon since she was catapulted onto the world stage when news broke of her romance with Prince Harry in 2016.

“The enduring popularity of her wedding dress, despite the wedding taking place almost four years ago, is a testament to the Duchess’ effortlessly elegant and timeless style.

“Despite leaving her official role as a working royal, this study highlights her unwavering ability to keep the world’s attention on her, not only through her actions but also through her iconic style.”