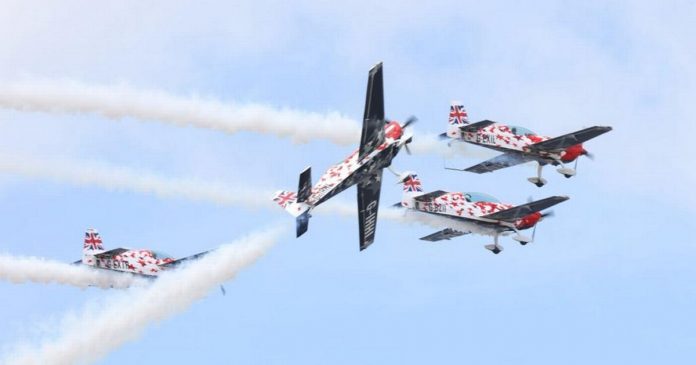 Visitors say they were left ‘trapped’ in their cars on Weston-super-Mare beach for hours as the town came to a standstill at the end of the annual air festival.

An estimated 200,000 people packed into the seaside resort for the event, which made a return at the weekend after a two-year covid enforced hiatus. And while tens of thousands enjoyed the aerobatic displays – including a finale by the Red Arrows – many said it was ‘carnage’ when people went to leave the show after it ended on Sunday afternoon.

Car parks across the town were full along with the town’s beach, where people were charged £10 to park for the day. Motorists said the traffic was so bad it brought the town to a standstill with many stuck in their cars waiting to exit the sands for hours.

“Quick enough to take your parking fee, don’t care how you get off after overfilling the beach to the point we were getting worried the tide was going to get us.” Tom Gray posted: “No organization whatsoever to filter cars out.

“At one stage a seven-lane free for all. Three hours to get out. Unreal.”

Kate Webb said: “Why weren’t there any marshalls? Happy to take our £10 to park but no organization to get the cars out.”

Lucy Ford said: “One hour and 10 to get off the beach. No organizers helping. It was a random woman helping off the street.”

Organizers of the festival posted on their Facebook page appealing for people to be patient. The post said: “We are working as quickly as possible to resolve the issue with the car park on the beachfront.

“The council vehicles are on hand to help car owners in difficulty. Please be patient with each other as it will take some time to completely clear the car parks.”

Parking arrangements for the festival are dealt with by North Somerset Council’s safety advisory group. Other roads around the town were also gridlocked by people parking for the event and leaving later in the day.

READ MORE: Sea Shanty Festival returns to Somerset – and it’s going to be bigger and better

North Somerset Council executive member for placemaking and economy, councilor Mark Canniford said he was aware there were traffic issues. He said: “The airshow was a hugely successful event.

“The problem yesterday (Sunday) is that we saw more people than ever before attend the festival. When that many cars turn up in one place, there is always going to be issues.

“It is frustrating that this has happened.” Mr Canniford said the lack of marshals was down to the fact that the council was struggling to recruit staff post-pandemic.

“We are, like other employers struggling to recruit staff,” he said. “And I understand that we only have a team of rangers and parking attendants helped the size it should be.

“There will be a debrief as there is after every major event and we will be investigating what went well and what didn’t and what we can change to prevent issues in the future. It was a fantastic event and the parking issues were a by-product of the fact so many people were in the town.”