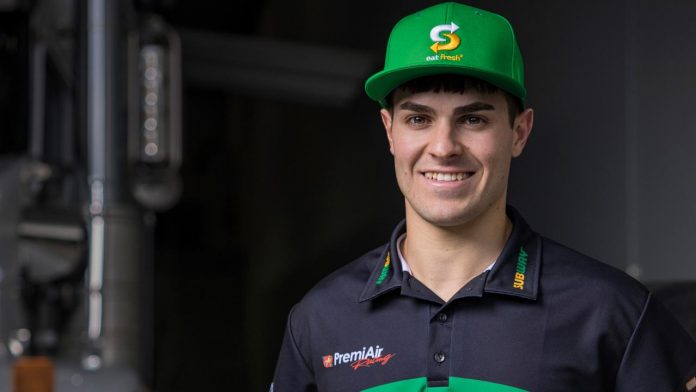 PremiAir Racing has poached S5000 runner-up James Golding from Team 18’s Bathurst co-driver roster to replace the ousted Garry Jacobson for the rest of the season.

Golding’s switch was confirmed shortly after Team 18 announced it had released him from his contract to partner Scott Pye in this year’s Great Race to “pursue another opportunity”.

The 26-year-old Victorian, who raced in the Supercars series full-time in 2018 and 2019, will take the wheel of Jacobson’s vacated car from this weekend’s Townsville 500 in a deal that runs to the end of the year.

Watch every practice, qualifying and race of the 2022 Repco Supercars Championship live and ad break free during racing on Kayo. New to Kayo? Start your free trial now >

“I’m stoked to be joining the PremiAir Racing team as the driver of the Subway car for my long-awaited return to Supercars,” Golding said. “I’d like to thank everyone that has been involved in getting this deal over the line, especially (tam owner) Peter Xiberras for giving me the opportunity.

“I’m looking forward to working with everyone in the team, and I can’t wait to get to Townsville.

“It feels great to be racing full-time once again, especially after what felt like such a long time away. In saying that, the break has given me time to reflect and refocus.”

Golding will partner with PremiAir incumbent Chris Pither, who’s also contracted to the end of this season.

“We are very excited to have James join the team,” team principal Matt Cook said. “He is a fast young man that comes to us with a wealth of experience and talent.”

Golding made his Supercars debut with Garry Rogers Motorsport in 2016 as an endurance co-driver before stepping up to full-time duties with the squad in 2018 and 2019, finishing 22nd and 20th in the championship respectively.

He switched to Team 18 as Mark Winterbottom’s Bathurst co-driver in 2020 before taking a seat in the S5000 series in 2021 and 2022, finishing third in the 2021 Tasman championship and second in this year’s Australian title race.

Golding’s defection means Team 18 is on the hunt again for someone to drive alongside Pye at Bathurst this season, though the team wasn’t willing to commit to a time frame.

“We have some really exciting options on the table to select a new co-driver for Scott and we look forward to making an announcement as soon as we can,” team owner Charlie Schwerkolt said.

BRITISH GP: The cold truth that would have prevented another Ferrari disaster

The midseason switch was instigated by the shock sacking of Garry Jacobson after the Darwin Triple Crown last month, where he’d been involved in a number of major incidents on track.

The 30-year-old has suffered a lackluster season before then, with only three top-10 finishes, leaving him 24th in the championship standings ahead of only Jack Smith among the full-time drivers.

Zane Goddard and Kurt Kostecki had initially been considered favorites to step into the vacancy, but both opted against breaking their contracts with Tickford to co-drive at Bathurst.

A lack of commitment for 2023 reportedly played a role in both turning down the opportunity, and Golding’s short-term deal to the end of the current season suggests Peter Xiberras isn’t done reshaping the former Tekno squad after moving it from Sydney to Gold Coast during the off season.