Home Wedding Cars Texas weather: Drivers have been trapped in their cars on I-10 for...
Wedding Cars

Texas weather: Drivers have been trapped in their cars on I-10 for 14 hours due to icy conditions 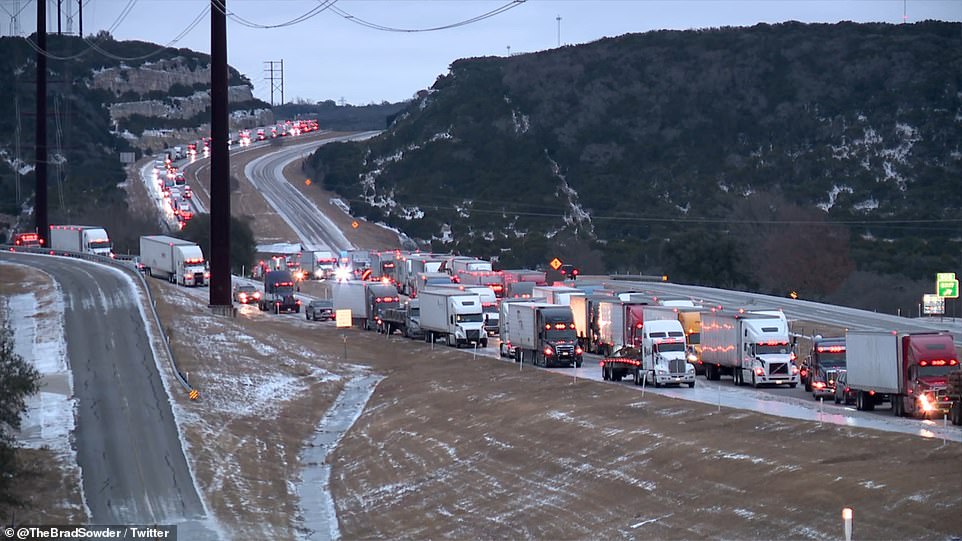 Hundreds of drivers trapped in their cars were finally freed late Friday morning after icy conditions and two major truck wrecks on a Texas interstate left them stranded for more than 15 hours in below-freezing weather- part of a winter storm that will affect millions nationwide.

Officials said the accidents happened on Thursday night and early Friday on Interstate 10 as an 18-wheeler traveling westbound jackknifed across the interstate near Kerrville, blocking the highway on both sides and backing up the road for miles. A second truck also swerved off the highway and lost control on the icy road.

Kerville Police Department said the Thursday night accident occurred at around 9:30pm after the tractor trailer attempted to break as it approached the slow traffic. The icy weather caused the vehicle to flip on its side and collide with a Ford F-350 pick up, seriously killing one of the occupants and seriously injuring the other.

The highway already was congested and moving slowly Thursday night due to icy conditions as temperatures dropped to -5F, but traffic completely halted after the truck crashes.

The Texas Department of Transportation said around 10am that the roads were partially cleared and by noon both the east and westbound lanes were open with traffic slowly moving through. Kerrville is about an hour northwest of San Antonio.

The eastbound side of I-10 was reopened and work to reopen the westbound side, which could take a few more hours, is underway.

Officials said it took so long to clear the congestion because the county was not equipped with the proper tow truck to remove the large vehicles and that the emergency vehicles were having trouble making their way to the area to de-ice the roads.

The temperatures continue to be below freezing in the area as winter storm Landon, spanning 2,000 miles from the Rockies to New England, sweeps the nation, putting 95 million Americans under winter weather advisories through Saturday and canceling 4,800 flights across the nation.

The storm has left about 350,000 homes and businesses across Texas, Ohio, Tennessee, West Virginia, Pennsylvania and New York without power, according to PowerOutage.us.

Traffic has halted on the busy I-10 in Kerrville, Texas due to icy road conditions on Thursday night and two trucks crashes 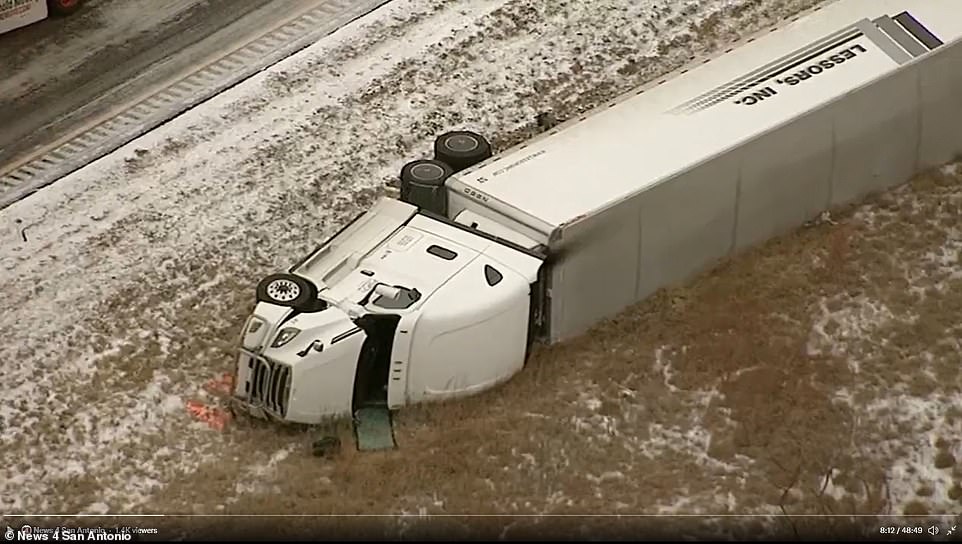 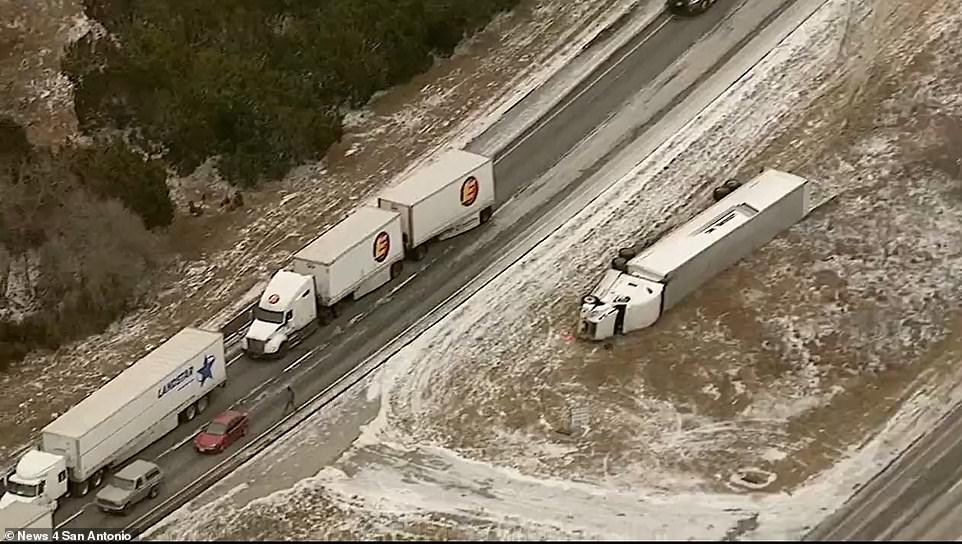 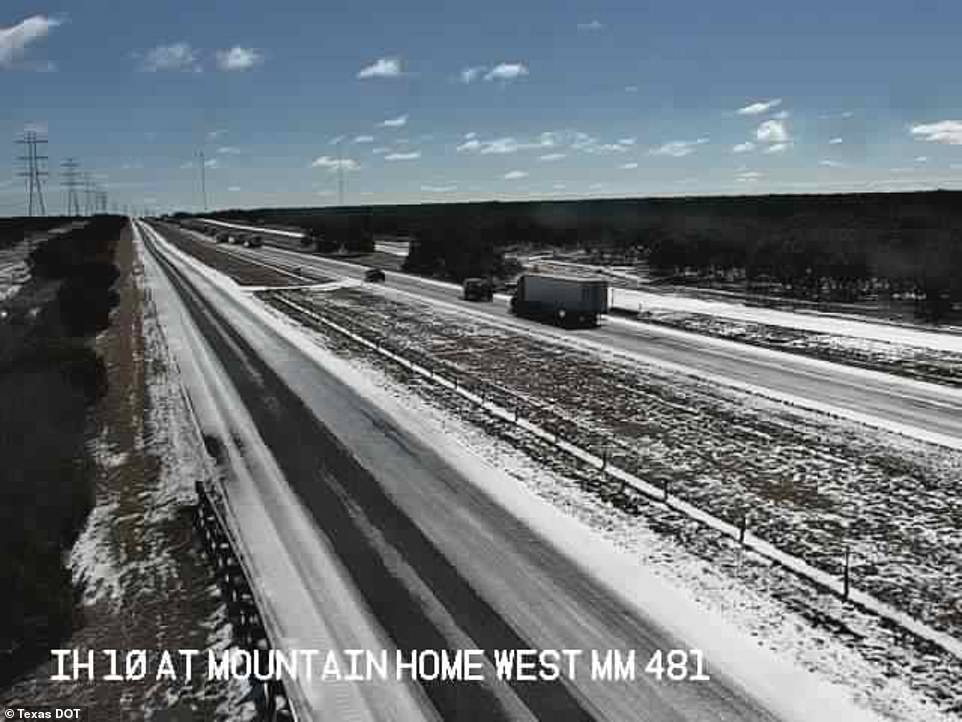 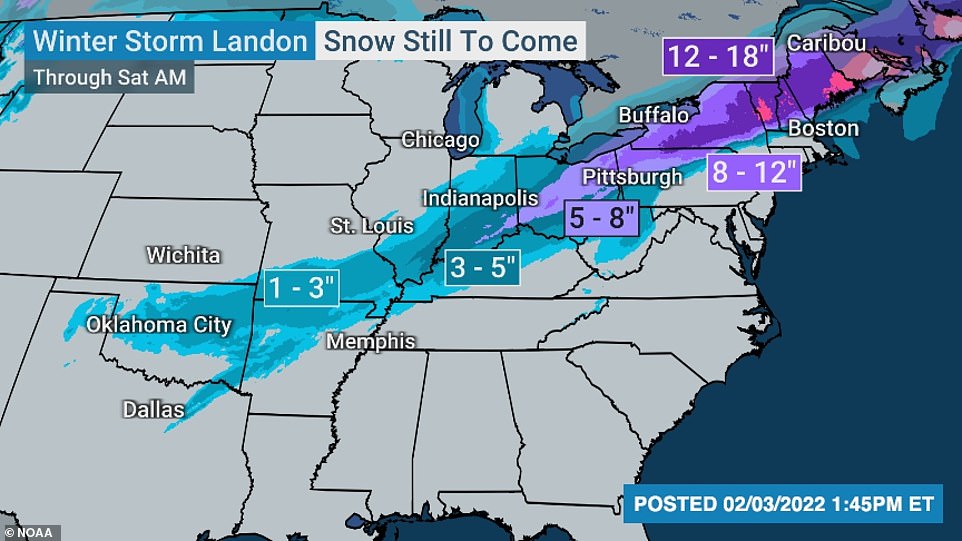 The storm originated in southwest Texas, spanning 2,000 miles and reaching the Northeast 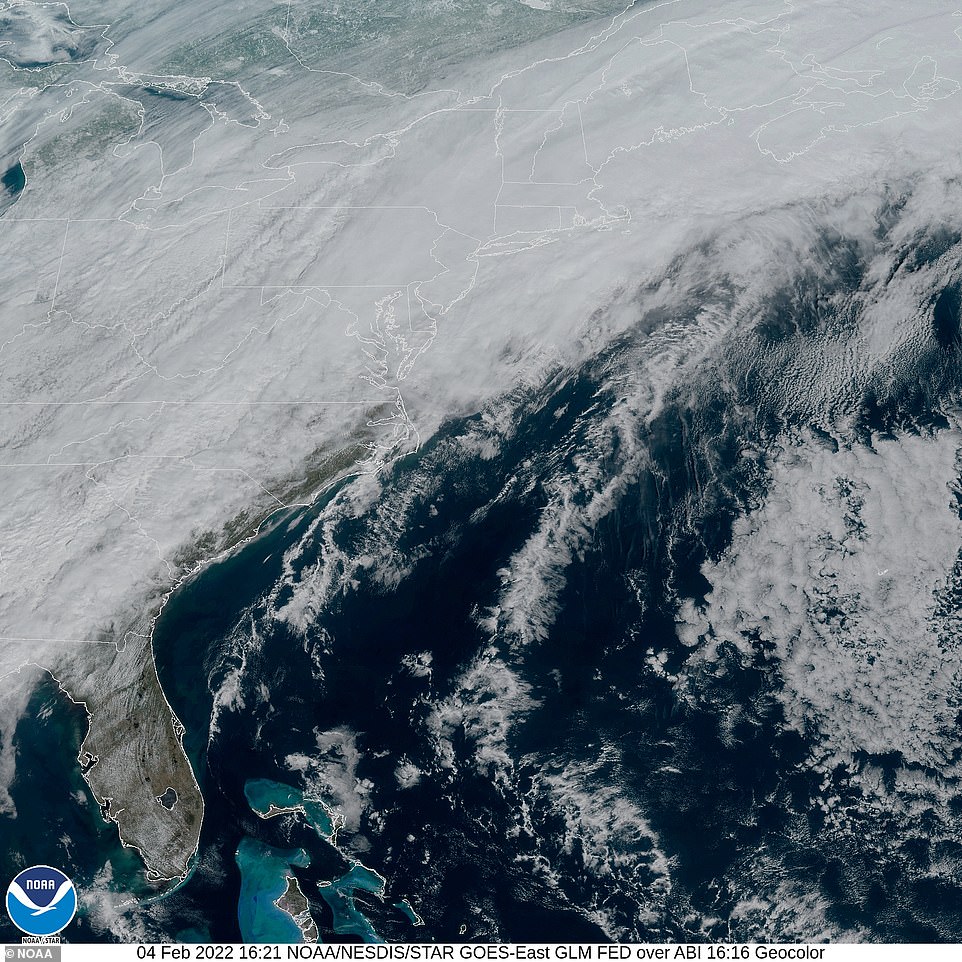 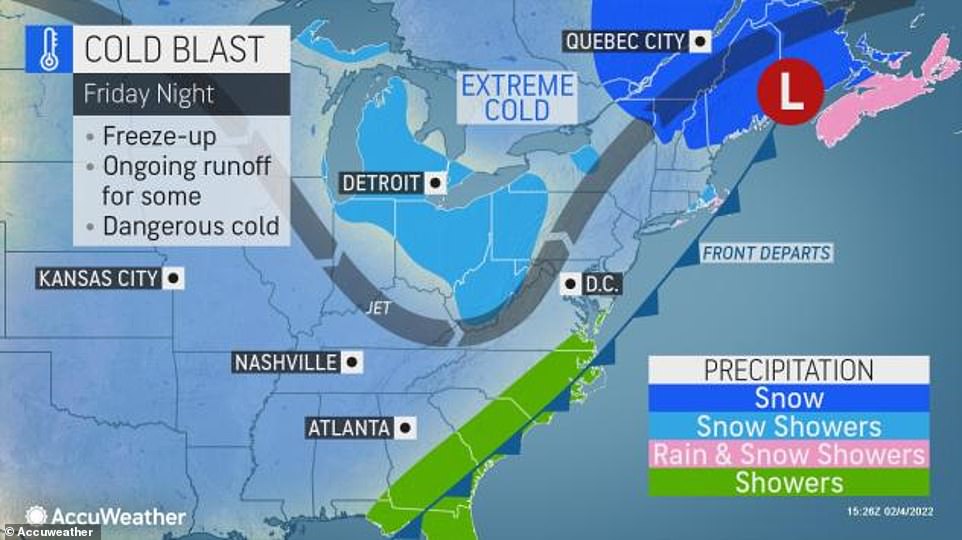 The storm brought a cold blast through the eastern half of the US, bringing snow and freezing showers 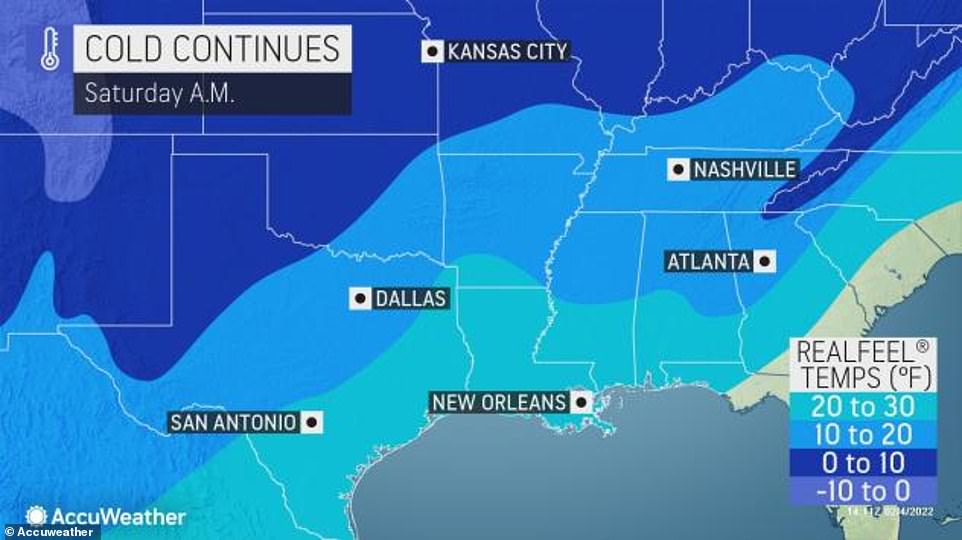 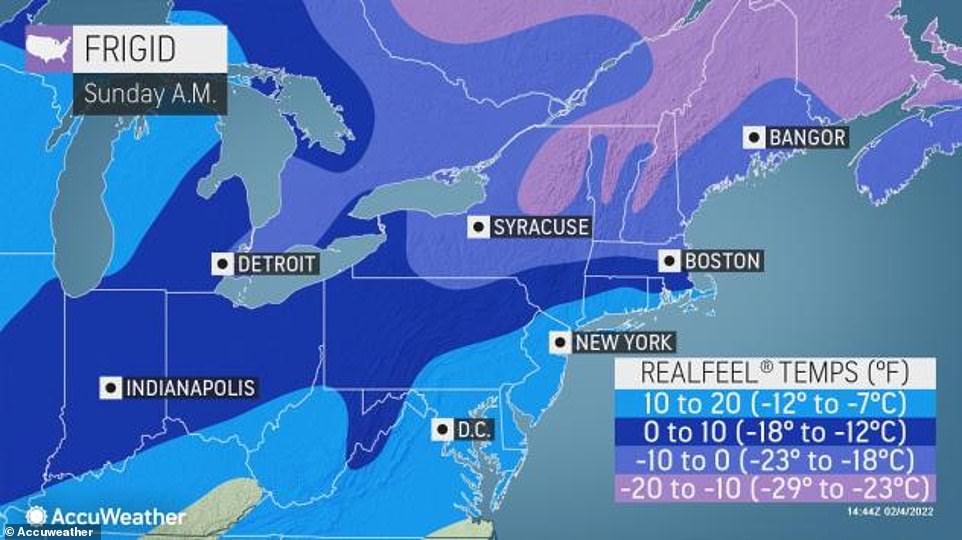 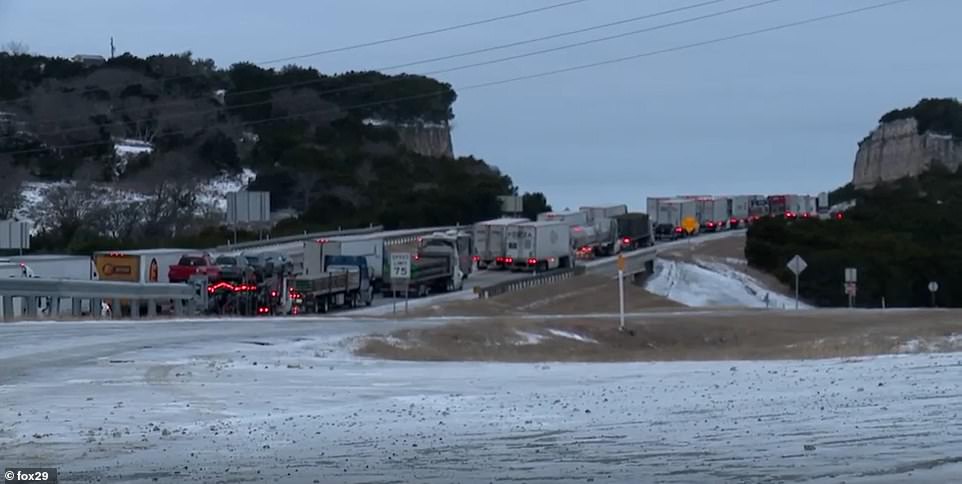 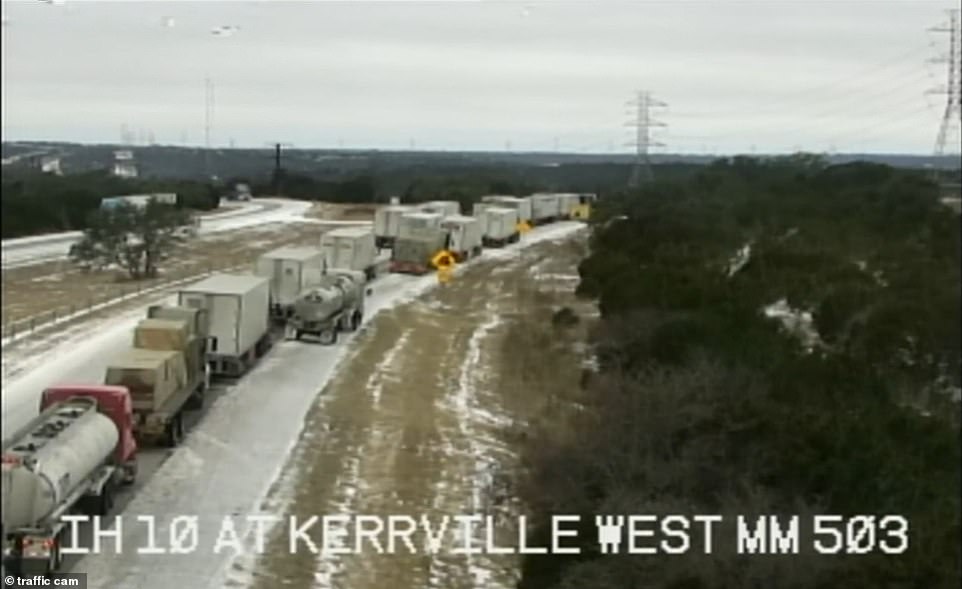 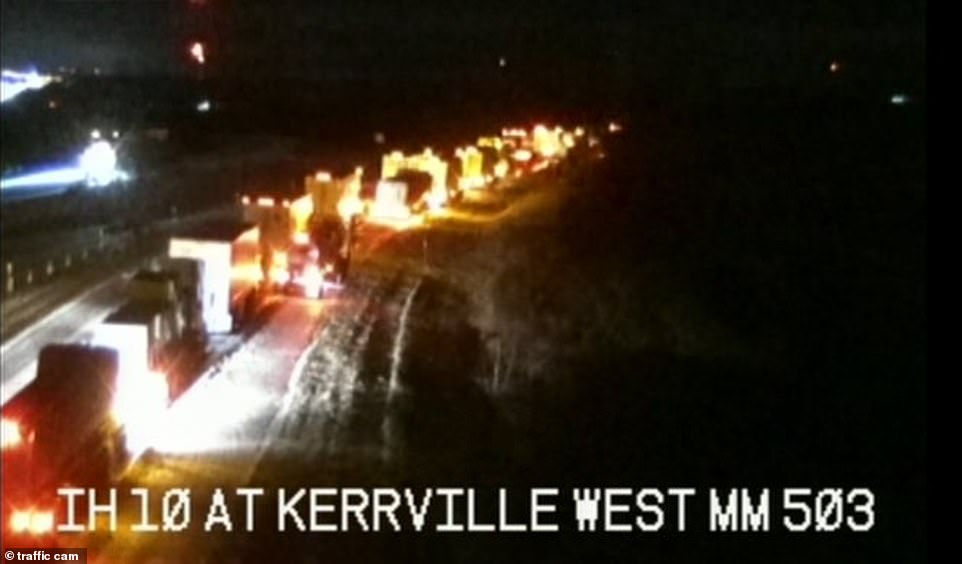 On Thursday night, drivers had to contend with -5F weather. Temperatures were still below freezing on Friday morning 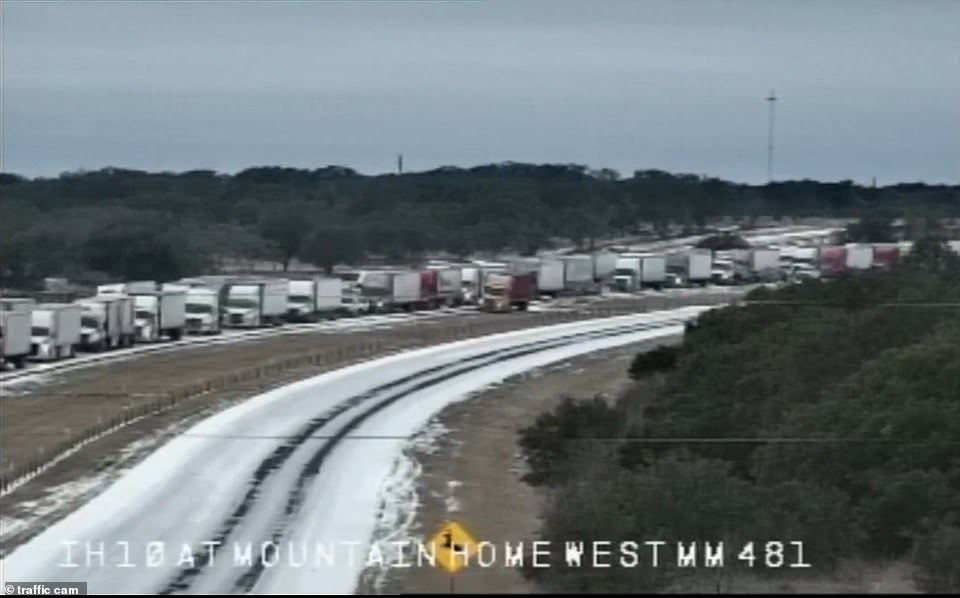 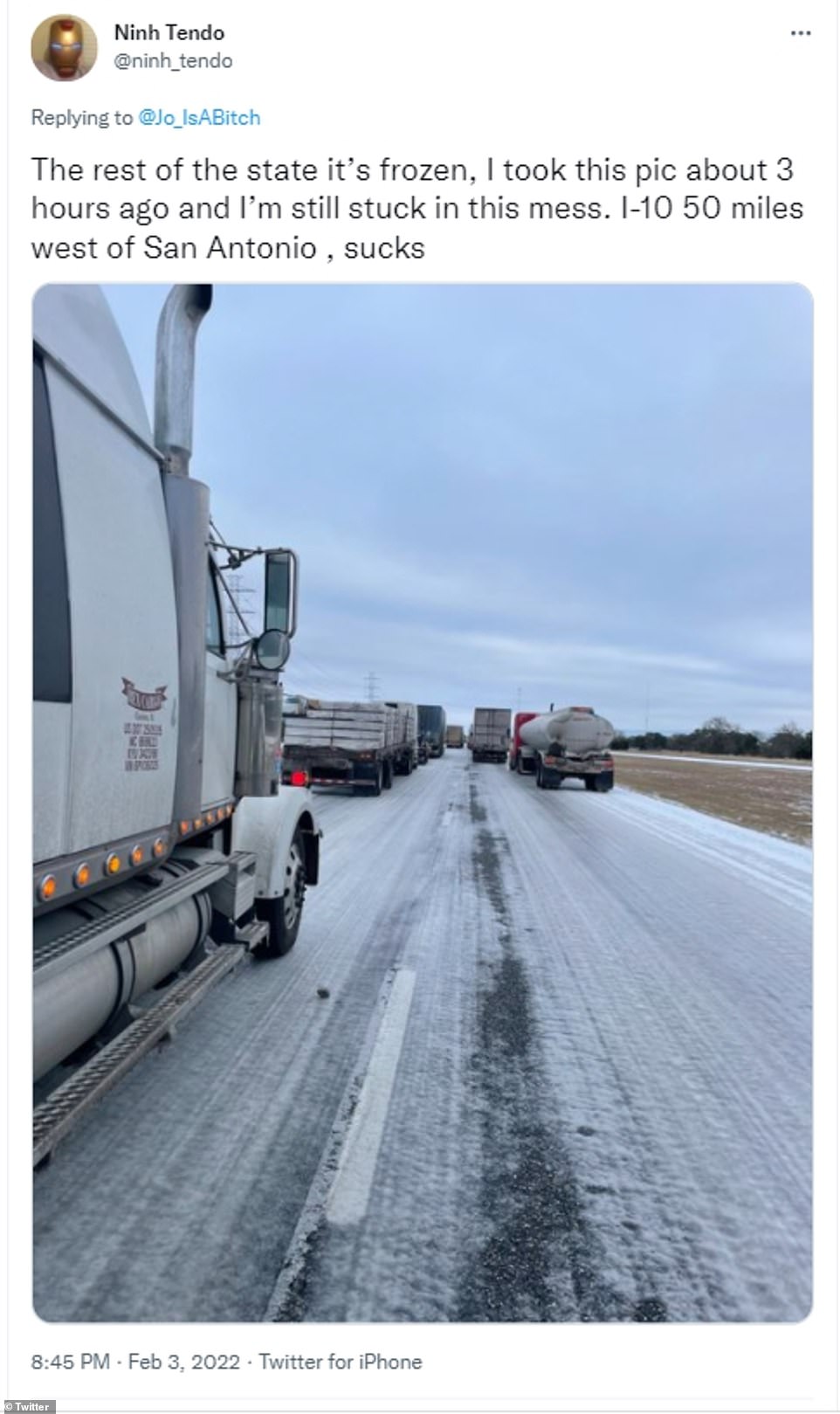 Drivers have been stuck on the road, some for more than 12 hours, in freezing weather 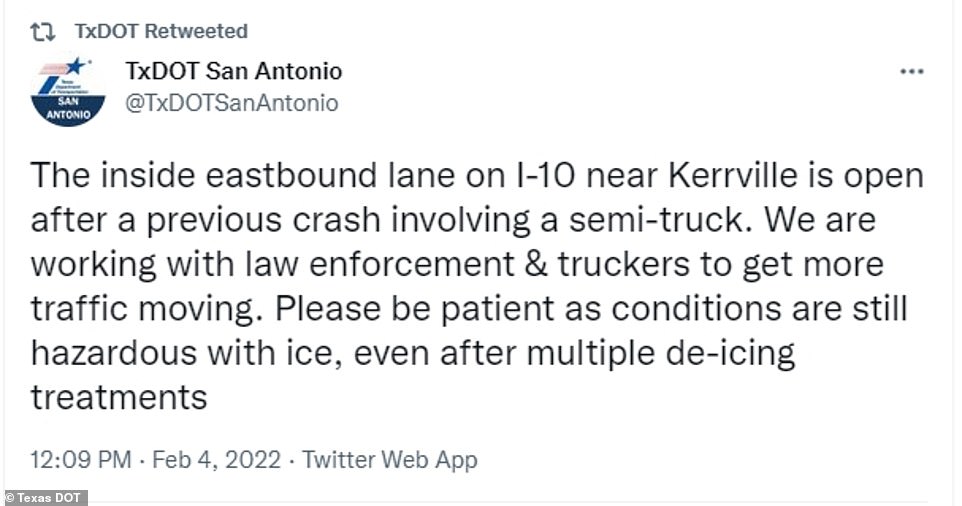 There are winter advisories throughout west Texas as officials urge truckers and drivers to avoid the roads through the weekend.

Another truck crash on I-35 left roads closed for hours on the highway before clearing out earlier in the morning.

Poor whether conditions in the Lone Star state began on Wednesday night as freezing rain caused several crashes, including an 18-wheeler that crashed on I-30, according to the Dallas County Sheriff’s Office.

The driver of the truck, whose name has not yet been released, was ejected from the semi and found dead lanes below. Another truck on the road also swerved and caused lane closures Thursday morning.

Williamson County Judge Bill Gravell told Fox 7 that Texas DOT and law enforcement are working to clear up icy roads throughout Texas, which he said were not built for this kind of weather.

‘Listen, I love my fellow Texans and will take a Texan to battle with me, but there’s nothing more frightful to me than a Texan driving on ice so we’re just not made to do that,’ he said.

Texas Gov. Gregg Abbott said there were 10,000 linemen working on restoring power in Texas and about 2,000 more coming from out of state to assist.

Marc Williams, executive director of the Texas DOT said that the department was working around the clock to make sure roads remained clear throughout the weekend and urged residents to avoid driving.

‘We’re not out of the woods yet,’ Williams said during a news conference on Friday afternoon. ‘We’re still dealing with dangerous conditions on the roadways for the next couple of days.’ 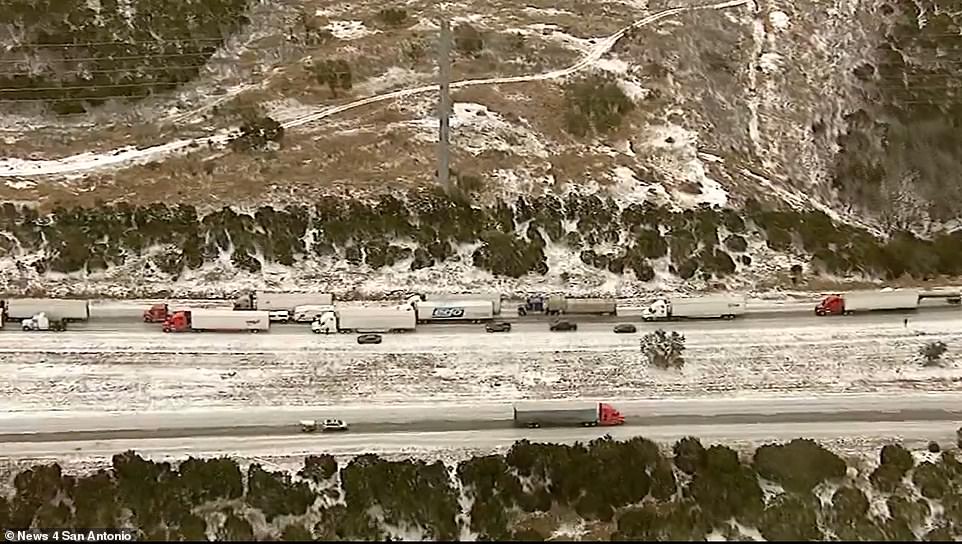 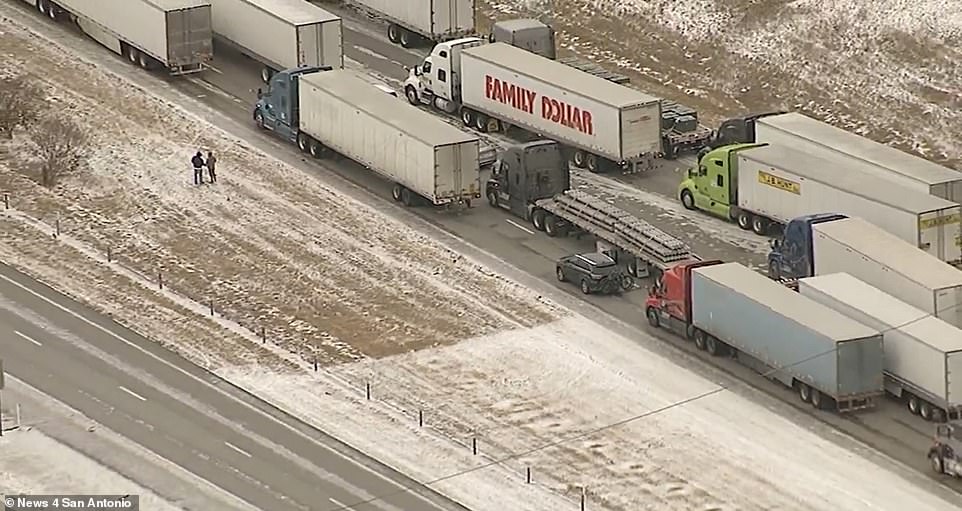 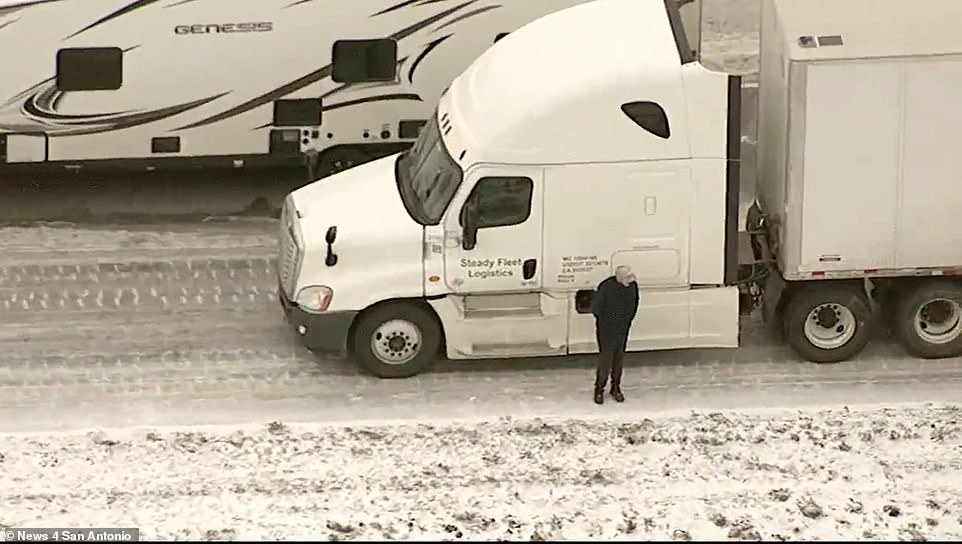 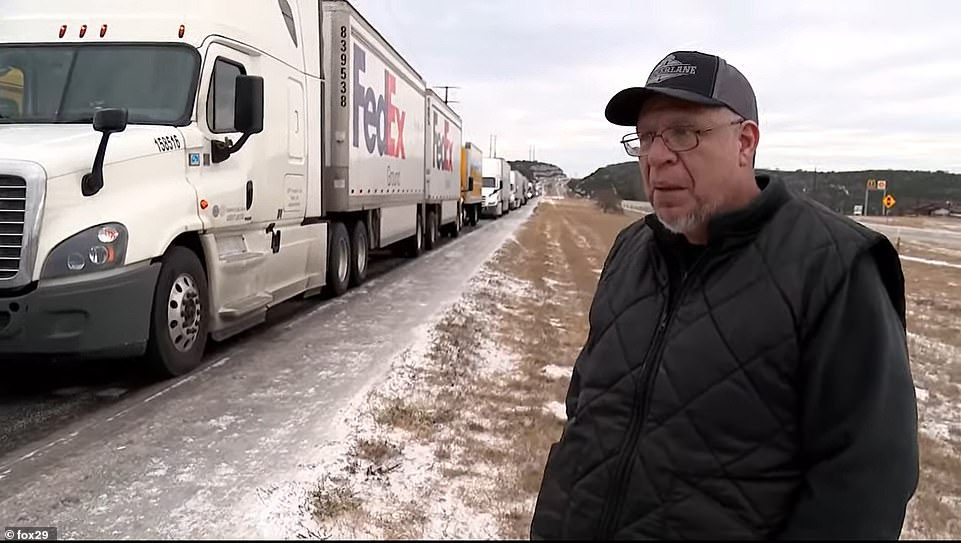 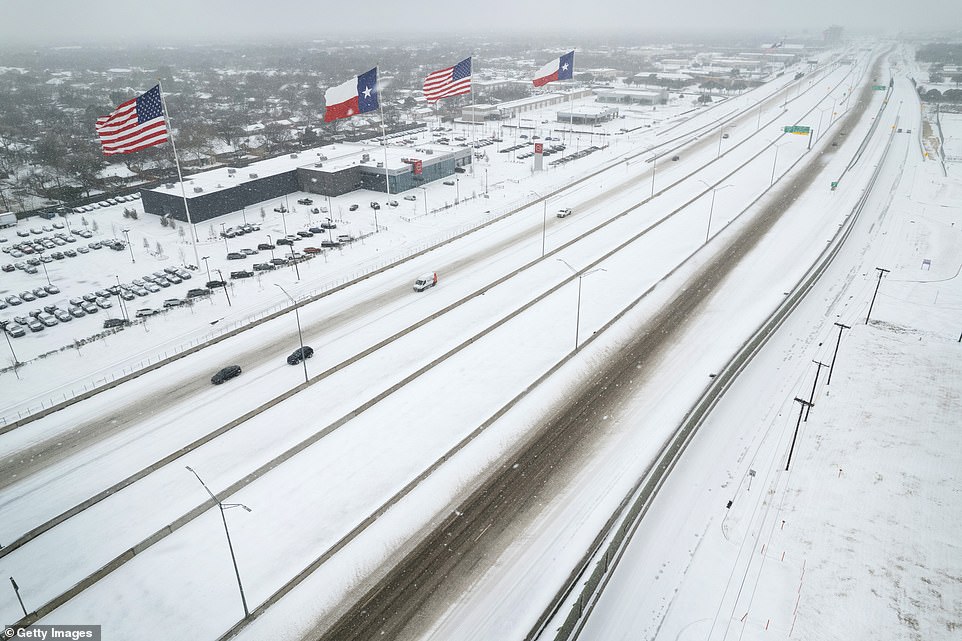 Texas officials are urging residents to avoid driving due to the poor weather as a snow storm continues to travel from the south northeast, leaving 300,000 Americans without power 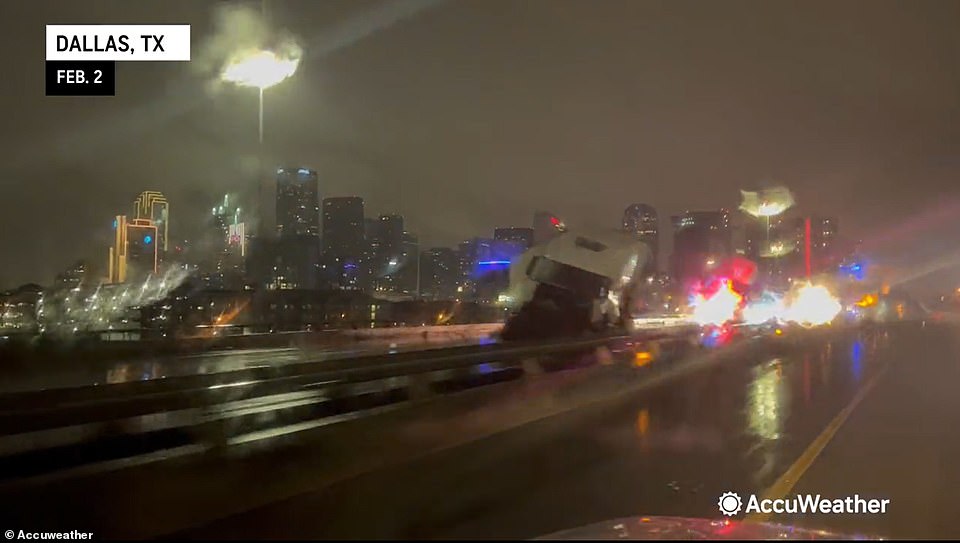 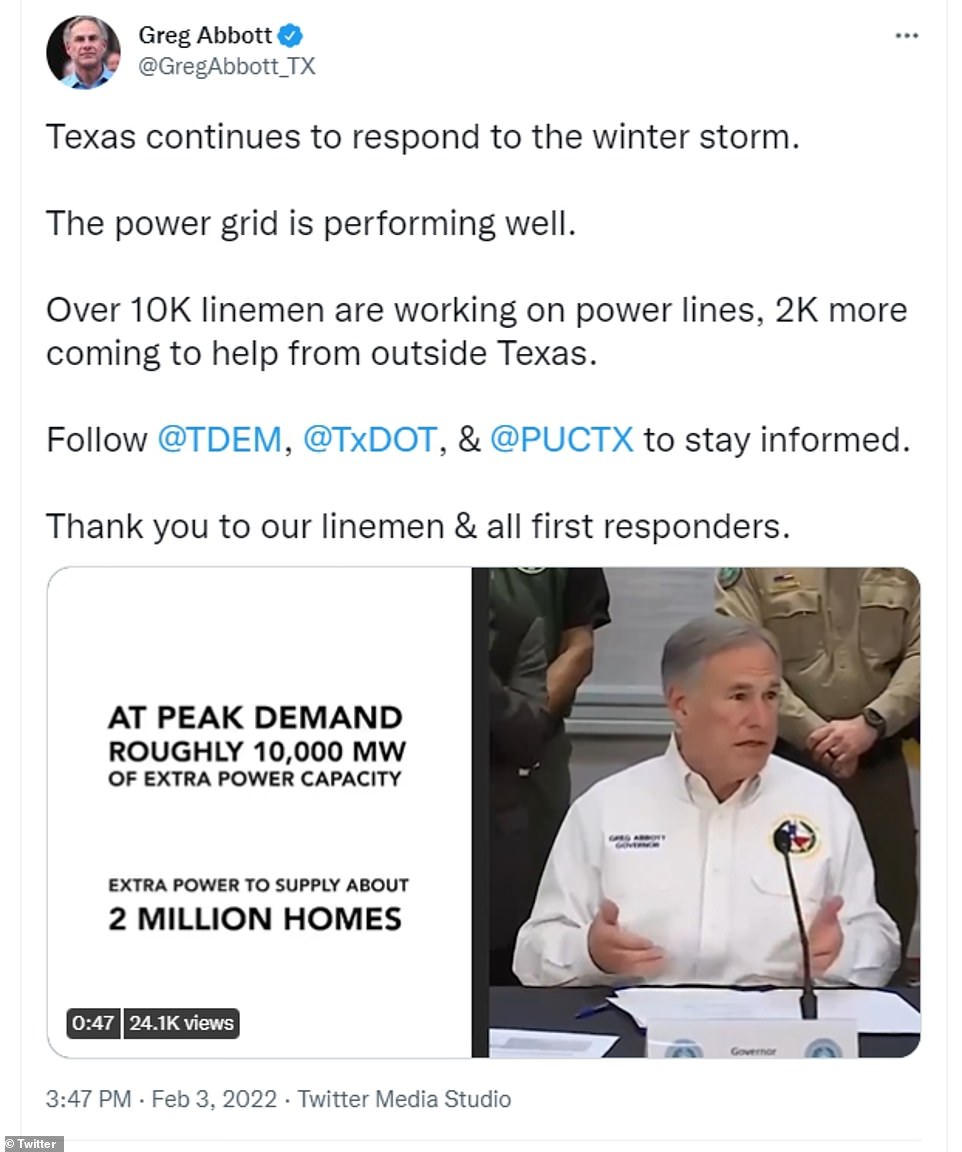 About 4,000 flights were canceled nationally on Friday and more than 3,500 were delayed due to the storm, according to Flight Aware.

American Airlines led the cancellations with nearly 600 flights canceled, about 20 percent of the company’s total flights scheduled for Friday.

Along with the crash in Dallas, three other deaths were attributed to the winter storm, according to CNN.

In New Mexico, a crash involving multiple vehicles along I-10 near Santa Rosa killed at least one person. In Cedar Crest, the sheriff’s office reported that one person died after their vehicle rolled nearly 100 feet down a mountain. A passenger was reported injured.

Another person in Alabama died during tornado-like weather caused by the winter storm. 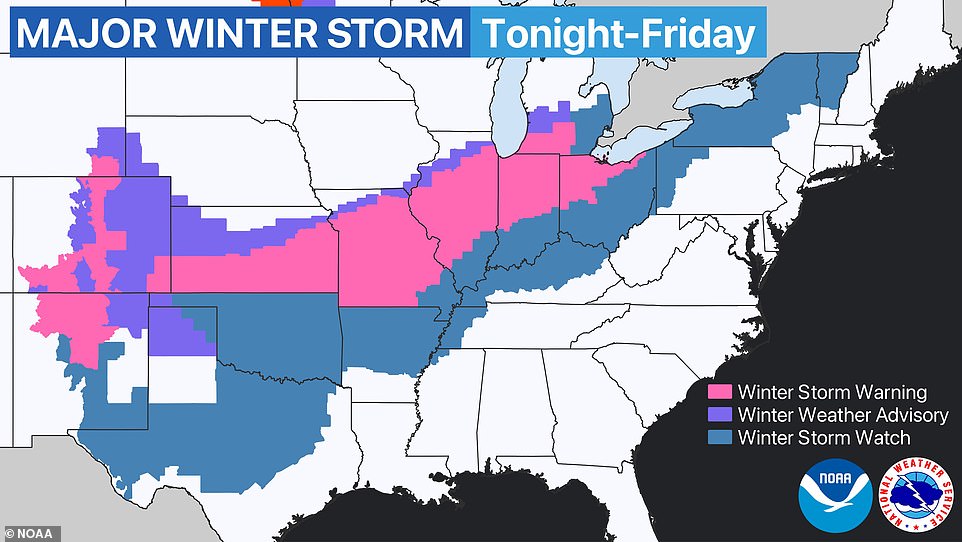 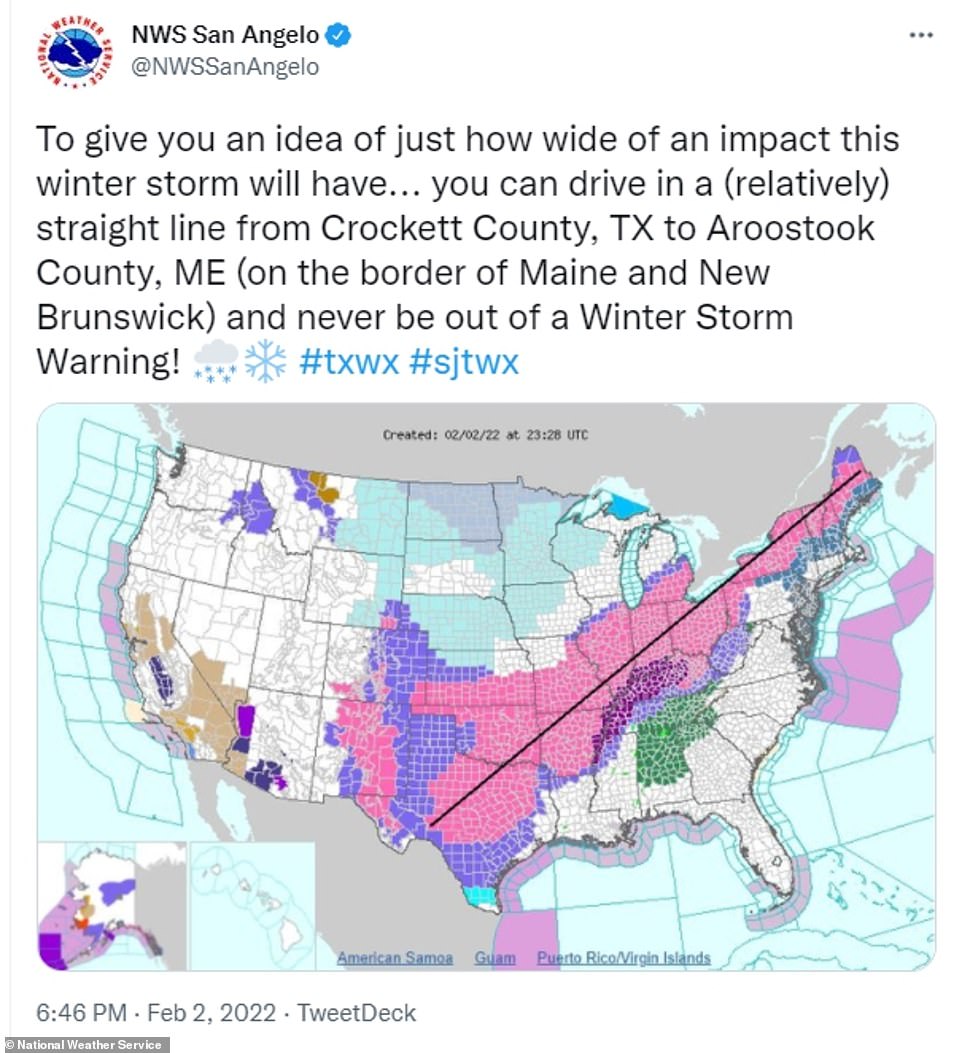 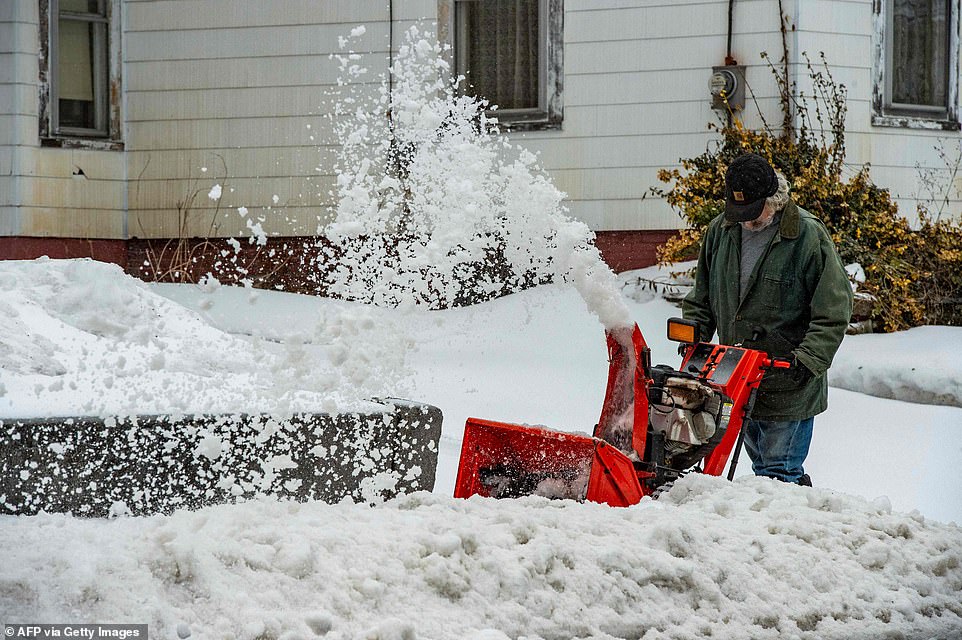 The storm reached up to New England, where New Hampshire residents are clearing out their driveways 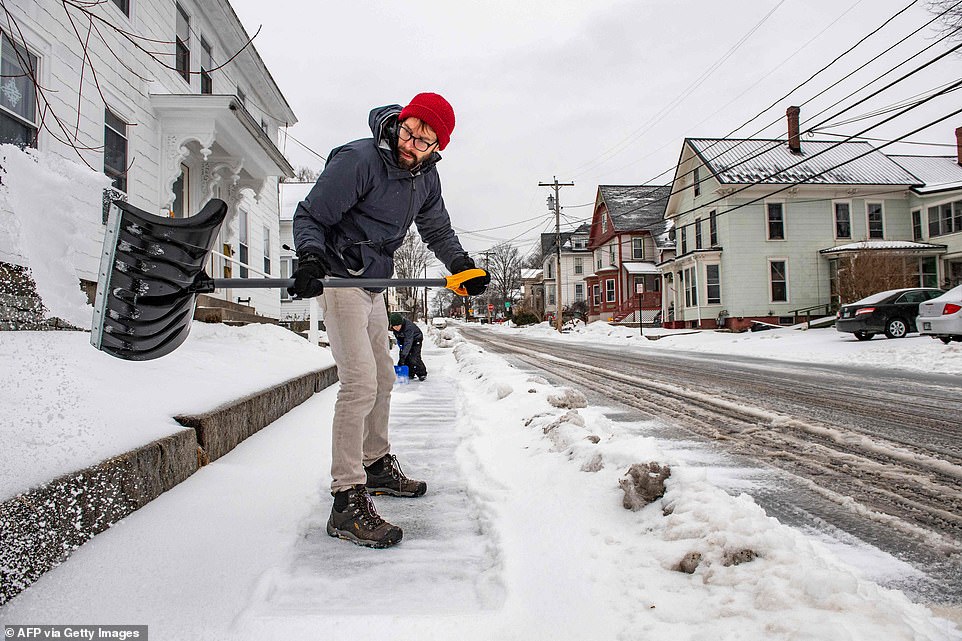 The temperatures are expected to drop further in Concord, New Hampshire as residents prep for the worst 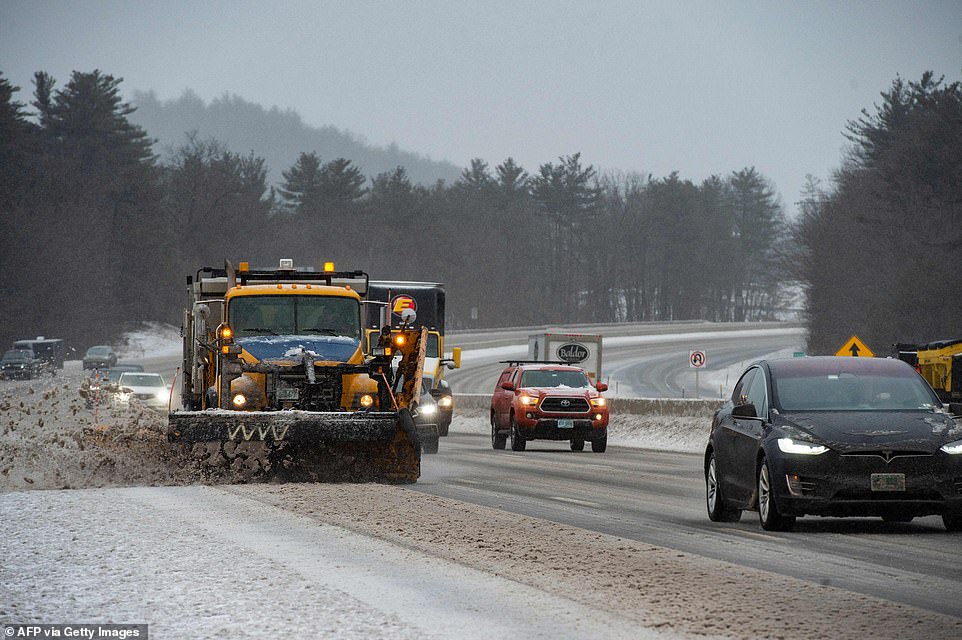 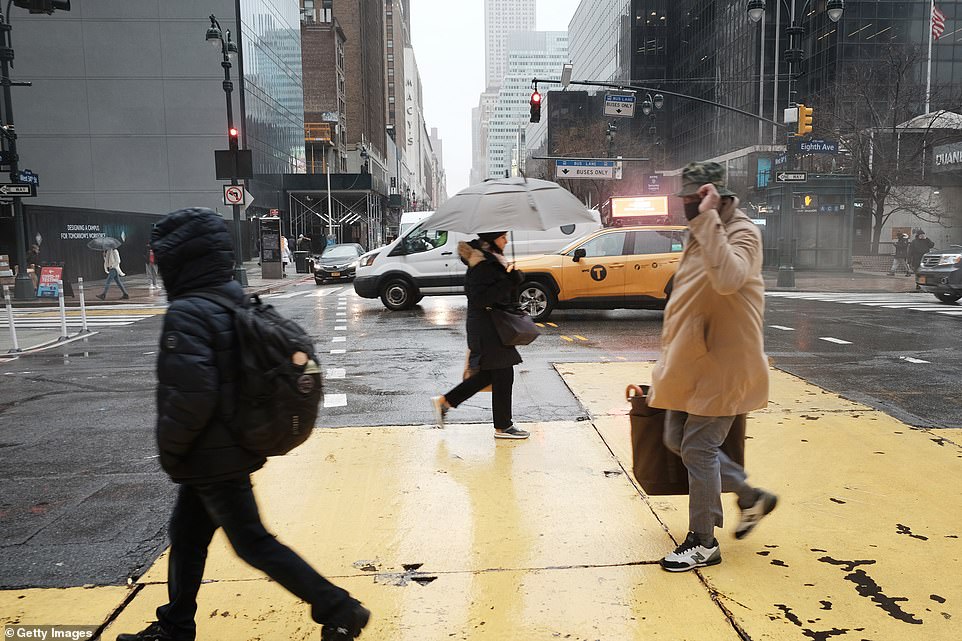 The Big Apple has been spared by the snow storm, but is contending with freezing rain and dropping temperatures

Hochul warned ice would be the main problem across New York and snow would affect mainly Central New York. She added that about 57,000 New Yorkers are currently without power.

‘You can always shovel snow and plow it out of the way, but when there’s ice involved, that is where it gets really treacherous,’ she told News12.

‘The roads are slippery, they’re ripe for disaster. If people are out there traveling, we’re absolutely encouraging people to stay off the roads as long as you can today.’

‘We are still in the midst of the winter season, and this latest weather event will bring freezing rain and a wintry mix to our area this week,’ the emergency management acting Commissioner Christina Farrell told the New York Post.

‘Freezing rain will impact the morning and evening commute, and we encourage New Yorkers to make adjustments to their travel plans.’