The pretty little village with fine dining, spa and supercars 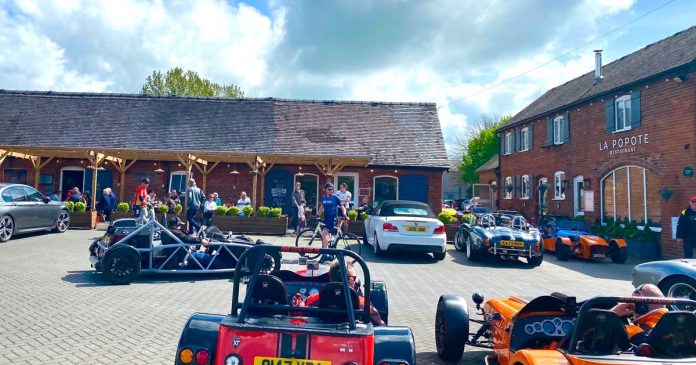 It may only be tiny, but it’s a hive of activity in the pretty village of Marton in Cheshire. With the village hub centered around the main A34 running through the village, it has become a popular stopping off point for cyclists and supercar enthusiasts who are making their way from Congleton and on to Alderley Edge and Manchester.

At the heart of the picturesque village are a collection of old farm barns that have been transformed into independent businesses by the local community which draw guests from far and wide. That includes the acclaimed fine dining restaurant La Popote in the biggest of the old barns just off Manchester Road.

There you’ll find some of Cheshire’s finest of fine dining, from the family team who set up here fresh from experience in some of France’s best restaurants. The venue is also famed for its hearty Sunday roasts and list of fine wines and champagnes.

Read more : The highest tea room in England which boasts the “best views” of the north west

For those after a more casual breakfast or lunch, the neighboring Old Barn cafe is a popular pit stop for cyclists thanks to its hearty menu of home-made breakfasts, lunches and cakes. There’s also a well-stocked ice cream cabinet.

There’s a gaming shop right next door to one side, while across the car park is the Gus and Bear grooming salon for dogs. Around the corner there’s also the Escape Day Spa and Beauty Salon which offers a wealth of treatments.

Erica Linney is manager at the Old Barn cafe and says the community spirit in Marton is what makes it so special. Businesses work together to help one another – she points to the cafe working with the spa next door to offer afternoon teas and drinks for guests.

Erica says: “Marton is ace, it’s on a major lay line that runs through the whole country so I think it’s got an energy. “There’s just something about it that you can’t put your finger on.

“People love it here and there’s just a great community spirit with all the businesses working to help one another.”

Erica says that the cafe regularly welcomes cyclists thanks to being on such a well-known cycling route through Cheshire. And with a huge car park outside, it has also become known as a hotspot for supercar enthusiasts who stop off for a coffee and cake on their way around the county.

On our visit an entire convoy of Cobra and kit supercars were parked up outside the Old Barn and La Popote on a pit stop before driving across Cheshire to the Wirral on a charity drive. Erica said: “The owners of the barn here were cyclists who used to stop off here, that’s how they knew about it.

“As a location it’s bang in between Congleton and Alderley Edge and now that there’s the new housing estate at Alderley Park there’s just so much more going on here.”

Across the road from the old Church Farm barns you’ll also find the village pub, the Davenport Arms. While the pub itself dates back to the 18th century, the current owners have given the venue a stylish makeover inside.

Once part of the Capesthorne Hall estate (the hall itself is around 3 miles down the road), the pub also boasts a huge beer garden at the back.

La Popote has been a fixture of village life since 2014, but two and a half years ago was taken over by the current proprietors, chef Joseph Rawlins and partner Gaelle Radigon. They met while working in Paris, but when Covid hit Joseph returned to his hometown of Wilmslow and hearing that La Popote was coming up for sale seized the moment to take it on.

Since then they have completely refurbished the restaurant in the former Church Farm barn. They’ve also added 55 covers in the stunning garden area which is set next to Marton’s historic timber-framed church and is proving popular for wedding breakfasts and events.

Joseph trained at the prestigious Gordon Ramsay School and worked at the famous Jadis restaurant in Paris under Guillaume Delage. But, returning to the UK, he knew the Marton area well and saw the potential in the restaurant in the location.

They offer a seven course tasting menu for £70 as well as a la carte. And on Sundays they’ve become in-demand for their mouth-watering Sunday roast of Beef Sirloin and all the trimmings for £25 – with quite simply the biggest and tastiest Yorkshire pudding you’re ever likely to lay your hands on.

Joseph says: “In this area of ​​Cheshire it might seem like we are out of the way, in the middle of nowhere, but actually we’ve got everything around here. We’re so close to towns like Macclesfield, Congleton and Alderley Edge so it has been a great location for us.

“I always wanted to open a restaurant, and we’re able to do something fine dining here but a bit more modern. We are a young team, and our lunch men changes every week and the a la carte every four weeks to keep things fresh and new.”

Right next to La Popote, up a set of steps, you can walk and visit the historic village church of St James and St Pauls. The unusual black and white building is thought to be the oldest surviving timber-framed church in Europe – dating back to 1343.

Inside you can marvel at the extraordinary timber structures and medieval doom paintings that were discovered under plaster in 1930 inside, as well as some stunning stained glass windows. Church officials try to keep the church open in daylight hours as much as they can to allow people to visit and enjoy the beauty of the building as well as inviting all to the regular Sunday church services.

Marton is also making a name for itself with its own golf course – which has just won an award as “best family friendly golf course in Cheshire”. The Marton Meadows golf course is owned by a local family who have an ethos of making golf “accessible for all”.

Kids can play the nine-hole course for as little as £8 a time, while adult prices are from £10 a week – with the idea that “pay and play” makes it more affordable and accessible than with a members-only system .

Manager Chad Parker says: “We are trying to make golf more accessible for all. We are very relaxed with the rules and etiquette to get golf to move with the times.”

The owners are in the process of building a new £5m clubhouse on the site due to be finished in September, while the purchase of another 25 acres of farmlands will create another eight holes in the near future.

Chad says it all fits with the community spirit of Marton village as a whole. He says: “Marton is a lovely place and it’s a rapidly growing place now. All the businesses here are getting strong, and the golf course is attracting people from further afield. We have members travel from as far away as Derbyshire to play here. ”

An old potato shed on the site has been turned into a hi-tech golf simulator which is also aimed at encouraging children to give golf a try. It can be hired for birthday parties and special events.

Chad adds: “Every business her tries to help each other. If you’re just driving through you might blink and miss it, but Marton has a lot going on now to make people want to stop and stay for a while.”

The Marton Oak is one of the UK’s rarest trees
(Image: MEN)

Marton is also famous for a very, very special tree. One of the oldest oak trees in the country, said to be over 1,000 years old.

The Marton oak is so old that it now appears to be split into three, but is still considered one tree due to sharing the same root ball. It is recognized as one of the 50 most important heritage trees in the UK.

Sadly it’s not open to the public as it sits on private land, although on our visit to Marton a friendly resident allowed us access to view it.

How to get there

Supercars parked up in the village center of Marton
(Image: MEN)

Marton can be found on the main A34 Manchester Road, in between Congleton and Alderley Edge in Cheshire.

The nearest train stations are Holmes Chapel or Congleton and the 38 bus service runs between the towns and the village.

Get the latest What’s On news – from food and drink to music and nightlife – straight to your inboxwith our daily newsletter.