Home Supercars We reveal how Top Gear gets such spectacular video of the sexiest...
Supercars 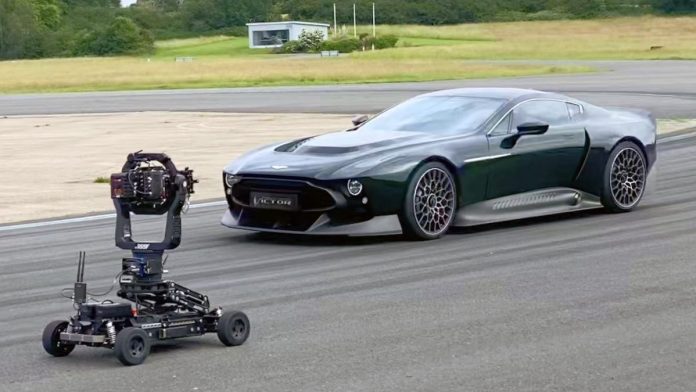 Ever wondered how BBC’s Top Gear gets some of its most dynamic high speed shots of the latest automatic exotica? Shooting from chase cars, drones and vehicle-mounted crane arms are just some of the methods used, but one lesser-known vantage point has recently come from the AGITO.

This incredible feat of engineering is what’s its makers, Motion Impossible, call a ‘modular dolly system’. Put very simply, it’s a remote controlled buggy base, topped by a camera mount, which then holds a broadcast-quality video camera of your choice.

The resulting vehicle can travel at speeds of up to 27mph, making it ideal for capturing spectacular fast-moving shots without needing to put a human camera operator in harm’s way. One particularly impressive Top Gear shot where the AGITO is ideal is the ‘joust’: where the AGITO drives towards the car moving parallel to it as it drives past. Achieving such an effect using a full-size camera car, or a human-operated camera, would be just too dangerous with a fast-moving subject car passing by at such close proximity.

Another signature Top Gear shot where the AGITO is used involves positioning it on the outside or inside of a bend; a strategic point to effectively capture speed. With a 500+ bhp supercar sliding past sideways in a cloud of tire smoke, margin for error can be wafer-thin, so using the unmanned remotely controlled AGITO maintains the safety of the camera crew. Of course, a camera could be mounted to a static tripod in the same position, but the AGITO’s ability to move can bring an additional sense of drama to the captured scene.

“The remote functionality of the AGITO provides an additional layer of creativity for the director and cameraman, enabling movement in whichever direction you choose, shooting your preferred angles in a nice and controlled way. The ultimate goal is to create scenes that feel so real you could be there, a need driven by the viewer’s appetite to feel part of the action. Audiences want to be on the edge of their seats, they want to be on the rollercoaster ride of emotions created by the scenes on screen. Many would argue that even with all the amazing advancements in CGI and post production magic, nothing really compares to recreating the action for real and capturing that on camera. It is a highly complex task, with precise choreography that requires the utmost precision with very little room for mistakes. This is one of the reasons why we developed AGITO, which time and time again has proved to be the perfect tool to use to guarantee the best delivery in terms of safety and quality of the shot.”

ATIGO makes the humble camera dolly look positively stone-age by comparison, however this isn’t the kind of kit you’ll find at your usual camera retailers – it’s aimed squarely at high-end comercial use.

The modular ATIGO dolly is comprised of the CORE – the main cassis, containing batteries, motors and RF remote control electronics. The CORE pairs with the MASTER – the handheld remote control, featuring fine-tunable speed and steering controls, 30 minute recordable movements and I/O for accessories such as foot pedals.

At either end of the CORE you then attach Drive Ends. These can be conventional buggy wheels for ‘free roaming’ driving, or train-type wheels which allow the AGITO to be used as a track-based dolly. The buggy-type Drive Ends can be specced with rough-terrain tires for off-road use, or slick rubber for use on smooth tarmac such as the Top Gear Dunsfold test track. Damped coil-over four-wheel independent suspension then irons out any bumps.

And if the suspension isn’t enough to keep shots super-smooth, you can equip the AGITO with the stablised V-Con Pro camera mount, which in turn can be topped by a tower attachment to shoot from a higher viewpoint. Total payload is up to 32kg – useful, given the ARRI Stabilized Remote Head SRH-360 used for Top Gear filming weighs 11.6kg, and that’s before you equip it with a camera and lens.

Head over to motion-impossible.com for more technical information about the AGITO, though sadly pricing is on a ‘need-to-know’ basis! Fortunately, you don’t need a BBC filming budget to get dynamic video shots – check out our guide to the best camera sliders for video and filmmaking for cheaper ways to get silky-smooth tracking shots. And here’s our rundown of the best cinema cameras right now to use for your filming.