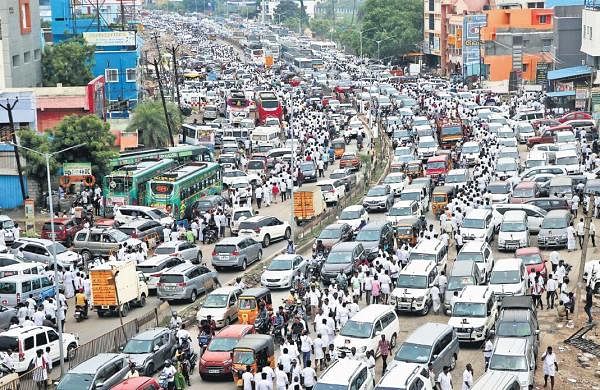 CHENNAI: Roads in Chennai’s Vanagaram were clogged with AIADMK cadres’ cars during the party’s general council meeting on Thursday, bringing traffic to a standstill for three hours. Along Poonamallee High Road, Chennai-Trichy bypass, and arterial roads, thousands of vehicles queued up for about 5 km up till Vadapalani, Thiruverkadu, and Maduravoyal between 8 am and 1 pm. Vehicles heading towards Koyambedu, too, could move at a snail’s pace.

Police were at the receiving end as commuters expressed anger over hundreds of vehicles belonging to AIADMK cadre parked clumsily on the road till as far as Nerkundram, 5 km away. The Srivari Venkateswara wedding hall, 500 m from Poonamallee High Road, was packed with cars, and men clad in white dhotis and shirts.

“We deployed over 1,000 personnel, including some from Chennai and Tambaram commissionerates, to ensure uninterrupted flow of traffic. But several AIADMK cadre who were told to move their vehicles ended up arguing with personnel,” said a senior police officer.

Commuters took to social media to share their plight. “I live in Vadapalani and go to Poonamallee for work. It usually takes an hour. I left home around 8 am; it’s 10.45 am and I haven’t reached halfway,” said T Subramani, who works at a private insurance firm. When asked if violators would be fined for illegal parking, a senior police officer said higher officials are being consulted on the matter.