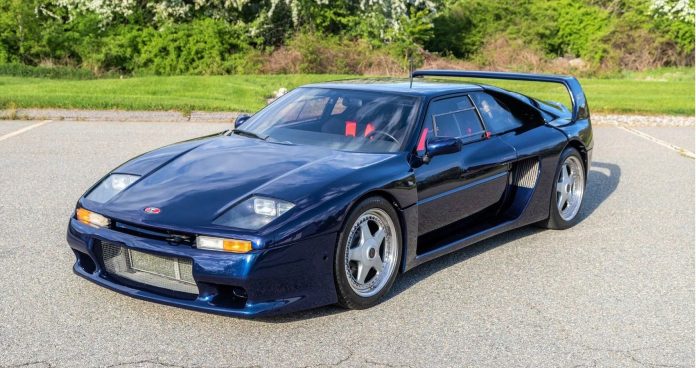 Chances are you’ve heard of the Lamborghini Diablo and Ferrari F50, but what about the Venturi 400GT? Maybe the Lister Storm? They might sound familiar from Gran Turismo 2 or that old poster hanging in your room, but we bet you haven’t heard of or seen the cars on this list…and for good reason.

The ’90s is considered by many to be the peak of automotive. Companies were finally recovering from the gas crisis, the economy was strong, and buyers had cash to spend on impractical vehicles. So many companies felt it was their time to take a shot at the auto industry and put out their own supercars. Many either failed to pick up a following or so few were sold only the owners could remember them. So we’re here to un-dust some not-so-long-ago history.

You may not have heard of the Callaway C12, but chances are you’ve heard of the car it’s based on. The C12 is actually based on a C5 Corvette, sharing the same chassis and engine block. Callaway boosted the 5.7L V8 and finely tuned the suspension and aerodynamics, bringing the top speed to 200 mph.

Callaway only produced 20 C12s, so consider yourself blessed if you’ve seen one in the flesh. Callaway entered the C12 into Le Mans without much success though (a common theme for many of the cars on this list). The 20 produced are actually just road-going versions of the cars used in Le Mans, the same design strategy from the next entry on this list.

Okay, Gran Turismo 2 fans take it easy, the rest of us may not even know what Venturi is. The French-based Supercar designers launched the 400GT to compete in the 24 Hours Of Le Mans. The Venturi had a fair amount of success, winning several races in the European GT series, but never taking home a Le Mans trophy.

Of the 100 cars produced, only 15 are street-legal cars. The rest were either prototypes or GT racing cars. Venturi took some obvious inspiration from an iconic 80s Ferrari…with some dubbing it the “French F40”. Interestingly, the 400GT made use of a Peugeot V6. It wouldn’t be fair to say it’s anything close to stock…but still…a Peugeot V6.

You might know Yamaha for making the Ford Taurus SHO V6, Volvo Inline 5’s, or even their wide array of acoustic guitars…but we doubt you know them for this. Yamaha built the OX9-11 in an effort to bring their Formula 1 prowess to sports car racing. The concept began in 1992 and Yamaha was only given 6 months to complete it before the idea was canned.

Only three prototypes were developed…making the OX99-11 the rarest car on the list (who would’ve thought the company that makes dirt bikes would have European Boutique level production numbers?). A Yamaha-built 3.5L V12 would’ve paired to a 6-speed manual. The cockpit is laid out tandem like a motorcycle, not side by side like normal two-seater cars would be. Yamaha did this to make the designers more comfortable…who were used to designing motorcycles.

A 7.0L V12 mounted in the front…because that makes sense…right? Lister crammed a Jaguar V12 in the front of their lightweight body capable of seating four people, sounds more like a grand tourer than a Le Mans supercar, doesn’t it? The massive V12 could make 546 horsepower, pushing the 3,600-lb body around with ease.

The Truth About Cars

Only four road-going models were produced before Lister ended road car production due to slower-than-expected sales. The racing team kept on for another decade though. Lister found just as little success in motorsport though, not taking home any hardware throughout the 1990s European Le Mans Series. The storm was met with a slew of reliability issues, the most notable being a fragile transmission. Finally, in 2001 won the FIA ​​GT championship after longtime rival Oreca and the wildly successful viper pulled out of the series.

Yes, De Tomaso made something other than the Pantera. The Guara replaced the iconic Pantera in 1994. Either a 4.0L BMW V8 or a Ford Modular V8 was paired to a Getrag 6-speed depending on the model year. The body was made of a lightweight Kevlar and used state-of-the-art F-1 suspension technology. Another notable aspect of the designing of this car is that it was the last car found Alejandro de Tamaso gave the blessing to before it was put into production.

De Tomaso opted out of a power-steering system and power brakes in an effort to save weight. The car clocked in at 2,400lbs, so their efforts proved successful. Only 52 cars are known to be built, and most of them never left the Eastern Hemisphere. We doubt it’d pass American safety standards anyway…the car was so dangerous that helmets had to be worn when driving the convertible version.

Is the V12 in the Lamborghini Diablo not enough for you? Well, look no further. Small Italian automakers Cizeta and Moroder teamed up to put two V8s together from the Lamborghini Urraco, call it a V16, and throw it in a highly modified Diablo. Several ex-Lamborghini designers also helped change the body panels and front fascia, to avoid looking too much like a Diablo.

The 6.0L V16 had 64 valves, 8 camshafts, and of course 16 spark plugs. Thankfully the only people who can afford that kind of maintenance are the only ones who can afford to buy a V16T. Only 12 were made, and cost a wallet-crushing $400,000 new in 1991. Also note that one of the pioneers and designers of the car is a musician and actor, not an engineer or fabricator. We can only wonder how one of these would hold up during an endurance race.

Related: Why The 1989 Cizeta V16T Failed To Storm The US As Promised

This Czech beast was a legend in the making until tragic circumstances kept it from taking off. Tatra is one of the few automakers in Eastern Europe, based in the Czech Republic. In an effort to bring more esteem to the brand, and the Czech auto industry as a whole, MTX and Tatra teamed up and started work on their own supercar. The car was built from the ground up, with a hand-built body produced in unison with MTX and a Tatra 3.5L V8. At the time of production, the Tatra V8 was the fastest Czech-made car…topping out at 165mph. 0-60 was 5.6 seconds, only making 302 horsepower from the 3.5 V8.

Plans were to produce 200 cars, with 200 customers preordering them after an appearance at the Prague Autoshow. Only four were made when a fire burned the MTX Tatra factory to the ground. Tatra couldn’t afford to rebuild the factory for such a limited run, so plans for the MTX Tatra V8 were canceled. Though performance and production figures are disappointing, the MTX Tatra is admirable for its mission and laying the groundwork for cars like the Croatian-built Rimac Nevera and Bulgarian SIN R1

Wait, Jaguar? Yep, despite being a major player in the car industry one of their greatest creations was all but forgotten about. The XJR-15 rests in the shadows of its little brother, the XJ220. So what makes the XJR-15 so great? Jaguar used their tried and true 6.0L V12 (opposed to the XJ220’s V6) and a body made completely of carbon fibre. Many of the design elements on this car were later used on the more famous XJ220 and even the McLaren F1. The V12 would scoot the car along just fine, maxing out at 191mph.

Like many of the cars on this list, the XJR-15 was based on a Le Mans race car. Unlike the others though, the car found success at Le Mans. The XJR-9 and XJR-12 which the XJR-15 is based on won the 1988 and 1990 24 Hours Of Le Mans respectably. This would be the last time the British automaker would find success at Sarthe though. Only 53 cars were produced, and all are right-hand drive. Related: Here’s Why The Forgotten Jaguar XJR-15 Supercar Is Underrated

Still haven’t found an exotic enough Diablo? Perhaps the answer is a little more homegrown. American brand Vector used the Diablo chassis and V12 as a basis for their new supercar: the M12. Vector made changes to the front and rear fascia and aerodynamics to set their car apart from the car it was based upon. Little changes were made to the mechanics besides moving the engine up a few feet to provide better weight distribution. The Diablo copycat could get to 60 in 4.8 seconds and reach a top speed of 188mph.

Vector tried to launch a motorsport program using the M12 after Lamborghini started competing in GT racing with some success. Unfortunately, the program never took off, and the car was plagued with reliability issues. In 1999 the M12 was canceled after only 54 models when Vector couldn’t pay Lamborghini for parts, but hey…at least it has Miata turn signals.