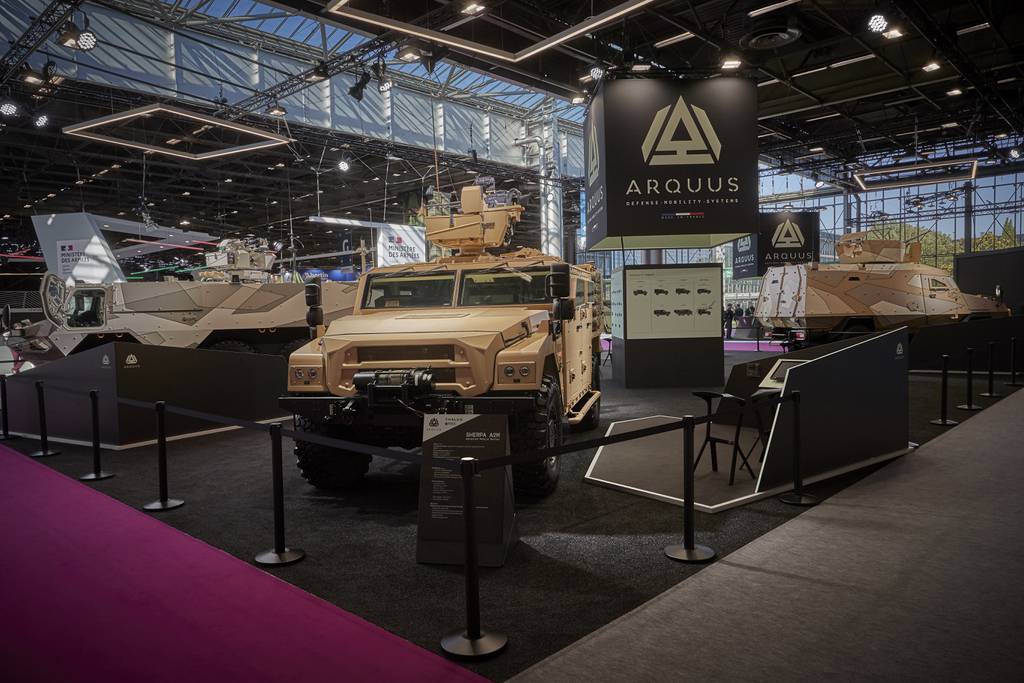 PARIS — In the past, military vehicles just needed to roll; now, they must come equipped with complex communications systems, radars, lasers, jammers, and other electronic systems, turning battlefield rides into mobile power stations.

European vehicle makers have been quick to jump on the business case for electric propulsion, offering products that promise to satisfy militaries’ needs for more efficient energy storage, quieter motors and lower thermal signatures. Last week, they showed their latest and greatest tech on the floor of the biennial Eurosatory trade conference, held outside Paris.

But while the civilian vehicle world has successfully deployed hybrid and electric cars onto city streets, the defense sector, now able to take advantage of those civilian technological advances, is just getting started.

Industry leaders who spoke to Defense News shared how the rhetoric around hybrid and all-electric powered vehicles, particularly tactical vehicles, has shifted in the past few years, as nations balance increasingly augmented energy needs against equally rising fuel prices, and tackle the effects of climate change within their services.

Nexter has been working on hybrid technologies for about 20 years now, per Sebastien Roy, Nexter’s energy research and technology leader. The French company developed an initial hybrid demonstrator around 2003-2004, not in response to a specific requirement, but merely to begin evaluating the technology, Roy said in an interview at Nexter’s pavilion at the conference.

Since then, the company has been able to take advantage of the new hybrid propulsion technologies being developed in the civil vehicle industry – some of which are more compact and capable, especially when it comes to batteries. “It’s really those technological evolutions in the civil world that have allowed us to say, ‘Okay, we will soon be able to integrate them into military vehicles,'” Roy said.

The rhetoric around electric and hybrid tactical vehicles at the Parc des Expositions here was much louder than what was heard at the same show four years ago. Demonstrators were spread across the corners of the show floor, from Arquus’ Scarabee light armored vehicle with a fully hybrid powertrain, to FFG’s bright blue Genesis 8×8 armored personnel carrier.

The German company – which stands for Flensburger Fahrzeugbau Gesellschaft – developed the Genesis demonstrator purely to examine the possibilities of a hybrid system on a tank, said Michael Moller, company vice president for special technology.

Engineers wanted to “have the knowledge, to be … a very early one on the market to know how to handle this technology, high-voltage systems, how to build it, to maintain it,” he told Defense News at the company’s booth at the show The Genesis was developed five years ago, and debuted at an FFG event in 2021, he added.

French company Texelis displayed a full-scale model of its MR400 4×4 armored vehicle at its booth, which features a new in-wheel, electric-hub drive developed by Texelis and UK-based Qinetiq.

The MR400 is derived from Texelis’ vehicle design for the French army’s VBMR Serval multi-role vehicle program, for which the company – which was part of the Volvo Group until 2008 – and Nexter are co-prime contractors.

When the Serval design was being developed four years ago, Texelis was already thinking about integrating a hybrid propulsion system, said Sebastien Guillon, the company’s export sales director. While that requirement has not yet been asked for, talks are ongoing, and Texelis is “already thinking about what the configuration will be,” he told Defense News at the conference. “What we understood is that it should be something very quick” to integrate and install onto a future Serval vehicle, he added.

The DURO-e, as it has been named, features a variable powertrain that includes a diesel engine and a pure electric powertrain that comes in either a battery-powered or fuel cell-powered version, along with capabilities including silent drive, boost, and extended silent watch, per the company. The DURO-e claims a low heat and noise signature, along with high-energy efficiency and self-sufficient energy supply.

General Dynamics partnered with Austria-based Magna Powertrain Engineering Center-Steyr and Switzerland-based Phi Power AG to produce DURO-e, the company said in a press release. The original DURO was designed for the Swiss army.

Rheinmetall also is evaluating hybrid and electric technologies for its future vehicles, company officials said at the show. On the sidelines of its pavilion at Eurosatory, the Rheinmetall set up a space dubbed the Technology Cube, designed to be able to discuss future vehicle requirements with current and future customers. Delegations could be seen moving in and out of space, including senior leaders of the Hungarian army, which committed to procuring Rheinmetall’s Lynx infantry fighting vehicle.

The French ministry of defense has particularly focused on finding solutions for more efficient energy storage as military vehicles are increasingly used for more electronic capabilities, such as communications systems, lasers, radars, and jammers.

Former Minister of Defense Florence Parly oversaw the release of the ministry’s first defense and energy strategy in 2020, and several months ago released the first defense and climate change strategy. The recommendations in those documents include a hybrid vehicle demonstrator based on the Griffon light armored vehicle, meant to complete testing by 2025 and inform future hybrid truck requirements.

Arquus, Nexter, and Thales are jointly developing the hybrid demonstrator, and the team is undergoing testing, evaluation, and integration efforts that will help the ministry of defense decide whether to launch large-scale production, according to an Arquus spokesperson.

The French army’s future program to build a new armored engagement support vehicle – called VBAE, for Véhicule Blindé d’Aide à l’Engagement – ​​may include a requirement for hybrid propulsion. Arquus has pitched a hybrid light armored vehicle, likely based on its Scarabee light reconnaissance vehicle, in anticipation of that requirement, the spokesperson said. The Scarabee vehicle debuted in 2018, and was developed to respond to what Arquus thought could be the VBAE requirements, and to reflect the company’s vision of what a next-generation reconnaissance vehicle could look like, they noted.

Nexter, which has already employed hybrid propulsion on its robotic systems, is also exploring the technology for its own submission to the VBAE program, Roy said. It expects to have a demonstrator ready around 2025.

SOFRAME, a subsidiary of the French Lohr Group, revealed last year its planned submission for the VBAE program, which will also be designed to integrate a full electric or hybrid propulsion mode, according to French reports.

The future Main Ground Combat System (MGCS) tank in development by France and Germany may also feature some hybrid propulsion technology. KNDS, the joint holding company that includes Germany’s Krauss-Maffei Wegman and France’s Nexter, is developing the next-generation vehicle that is expected to be fielded around 2035. Arquus is a subcontractor on that program.

One ongoing challenge relates to the cooling system of a hybrid vehicle, which makes it difficult to integrate hybrid propulsion into military applications, Nexter’s Roy noted. But as this technology matures in the civilian world, Nexter imagines being able to overcome this problem in the near future.

Some stakeholders noted that the market for hybrid military vehicles remains limited. The demonstrators on the Eurosatory show floor were overwhelmingly tactical vehicles, and officials may not be ready to expand their interest in hybrid technologies beyond those capabilities, industry leaders noted.

Sweden’s Volvo has been developing hybrid and electric vehicles for nearly two decades now, primarily to serve its customers in the civilian sector. Its defense subsidiary focuses on heavy vehicles such as logistics trucks that drive over extended distances.

So far, while officials are expressing interest in alternative fuel solutions, there has been little demonstrable effort to actually “hybridize” those types of vehicles for the military, Andreas Svenungsson, head of Volvo Defense, told Defense News at the company’s booth at Eurosatory.

For now, tactical vehicles appear to have the best use case scenario for hybrid or electric propulsion vehicles, due to the operational benefits of quieter motors and lower thermal signatures, he noted. But for the vehicles Volvo produces, “We have not seen it [hybrid or electric propulsion] in the tenders or the requirements so far,” Svenungsson said. He noted that military programs have the added considerations of maintaining a secure supply chain and steady access to fuel, that remain challenges for the hybridization of ground vehicles.

But thanks to Volvo’s ongoing electric and hybrid propulsion efforts for civilian trucks and buses, “If they want to procure this for the defense segment, we are ready,” he added.

It was clear to these companies that the drumbeat for hybrid military vehicles is only getting louder.

Years ago, officials were talking about the possibility of hybrid vehicles, but without any “real requirements,” noted Texelis’ Guillon. “Now, I think they have a clear vision,” spurred by environmental targets or the need for “silent mode” capabilities and energy storage. “It will help us, because the way we want to develop something, it should be useful for the customer, and not just be hybrid by name.”

Vivienne Machi is a reporter based in Stuttgart, Germany, contributing to Defense News’ European coverage. She previously reported for National Defense Magazine, Defense Daily, Via Satellite, Foreign Policy and the Dayton Daily News. She was named the Defense Media Awards’ best young defense journalist in 2020.