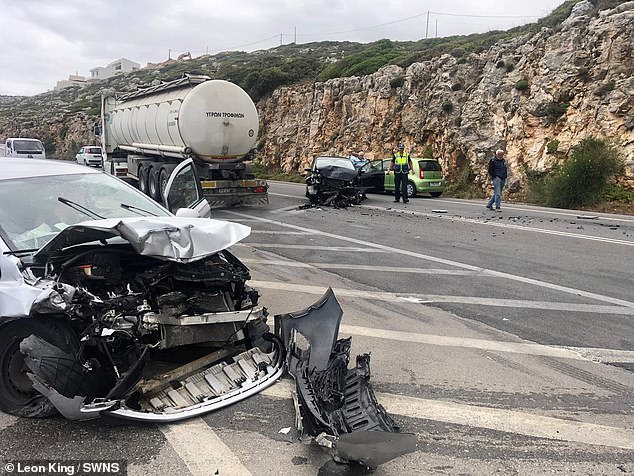 A couple’s dream wedding in Crete turned into a ‘week from hell’ after a car plowed into their wedding convoy on the way to the ceremony, leaving the groom’s best man and his wife in hospital.

Leon King, 40, and his new wife Kirsty were about to tie the knot when the car smashed into a convoy carrying best man Dean Fitton, 40, and his wife Gemma, 38.

They both had to be hospitalized for multiple injuries following the smash that ‘should have killed someone’ and Gemma has been left with devastating back pain.

Dean, who has been best friends with Leon for 30 years, yelled at the groom from the ambulance telling him to press on with the despite everything as the wedding ceremony had previously been canceled because of the pandemic.

And in a strange twist, when Leon returned to his home in Wouldham, Kent, last Tuesday his car, containing Dean and Gemma’s luggage, inexplicably burst into flames outside his home in the night.

Leon King, 40, and his new wife Kirsty said their dream wedding in Crete became a ‘week from hell’ after the best man got into a serious car crash and was rushed to hospital. Pictured: the smashed up car 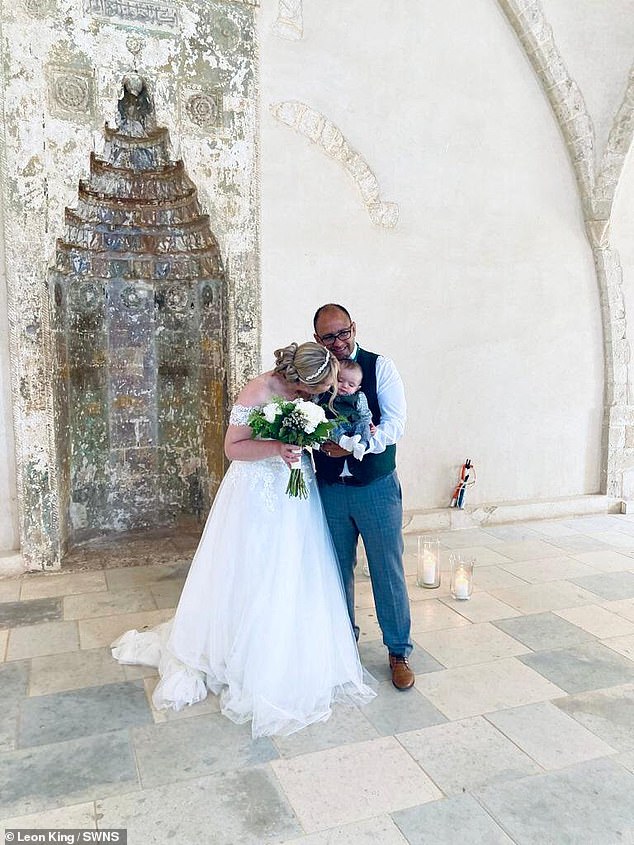 Leon and Kirsty had dreamed of tying the knot in Crete, after their wedding was canceled previously due to the pandemic. Pictured: The not-so-happy couple in Crete

Leon said: ‘It was a long week of hell.

‘We spent the week traveling back and forth from hospital, before we flew home.

‘The best man and his wife had to take an air ambulance and now she’s in Pembury Hospital with a back injury.’

Leon had been at the front of the wedding convoy on Thursday May 19 when he saw a car approaching them on the other side of the road.

He said: ‘There were five cars traveling down and we were about eight minutes away from the venue.

‘A car came at us at speed and hit the fourth car along in the convoy.

‘It hit it and spun it onto the other side of the road.

‘I saw it in my rear view mirror. I just saw the car in front swerve and then the impact.’

Having turned his car round and driven back to the crash site, Leon found his friend’s car on the side of the road ‘smashed to pieces’.

He added: ‘The fire brigade attended but they were atrocious.

‘They attended to the other vehicle first, which the people had walked out of. My best man’s wife was just dragged out of the car.

‘Over here they would take the roof off and lift them out, but they just dragged them out.’

Despite Dean’s insistence the wedding went ahead, Leon followed the ambulance to hospital, where he said the nightmare continued.

He said: ‘I will never say anything about the NHS again because our medical system is so much better.

‘The wedding went ahead several hours later when we managed to find out they were stable in hospital.

‘Everyone was still quite emotional. We were concerned about my friend’s wife and her spine. We were all very concerned.

‘It’s taken a toll on everyone and everyone was stressed out.

‘We barely just got through the wedding ceremony because everyone was very distressed and upset.’

Dad-of-four Dean, 40, who lives with Gemma in Snodland, Kent, said the week had started well and the party had been optimistic after the previous cancellation.

He said: ‘It had been pushed back due to Covid so they had lots of problems getting to that point.

‘We arrived at the villa, and it was perfect.

‘We headed over to the venue in convoy but along the way something went wrong with the car in front – a wheel cap came off and we ended up switching positions.

‘I ended up moving forward one, but I’m glad that we did, because the car that was in that position was lighter than ours and there was a 15-month-old child in it.

‘I don’t know if they would have survived, and there would have been more injuries because there were more people in there.

‘It was a killer of a crash. It should have killed someone.

‘We were traveling along a single carriageway and the convoy approached evening.

‘As we went round the bend I just remember seeing this black car coming towards us.

‘He didn’t follow the road round the bend, he just came across our side of the road, then he tried to correct it and by doing that plowed straight into us.

‘If he didn’t correct it he might have skimmed a car or gone between two cars.

Dean was unable to walk and he had to be helped from the car, but his wife had suffered even more severe injuries.

He added: ‘The car started smoking and they tried to get us away.

‘We were with people who were first responders and they kind of told them what needed to be done.

‘They just threw us in an ambulance, which then found every pothole on the island to drive over.

‘Once we were in the ambulance I shouted that Leon had to go and get married because he had been waiting that long.

‘But he didn’t – he followed the ambulance to hospital to check on us first.

‘When he realized we were going to make it he went to get married and then came back afterwards.’

He said: ‘They were pulling her arm and she was begging them to stop. I was in the opposite room and trying to get to her.’

He said: ‘I basically had to steal a wheelchair and park it outside her room.

‘In Greece they don’t have nurses like we do and it’s left to the family to provide care.

‘The nurses just come in and give pain relief every now and again. The daughter of the lady next to us spoke English and helped us translate.

‘We found out the woman whose husband caused the crash was in the next bed but one, which traumatized my wife more. We ended up getting her moved.’

With poor hygiene and a lack of dignity for patients on the ward, Dean said he was relieved when his travel insurance firm arranged for Gemma to be taken to a private hospital, where the care was ‘out of this world’.

He said: ‘It’s a lesson in getting good insurance.

‘The company got us a private jet home – they flew from Düsseldorf to Crete and took us to Biggin Hill.

‘There was a German doctor and an Austrian paramedic and their attention was on Gemma the whole time.’

Although recovering at Pembury, it’s not yet known when Gemma will be allowed home and Dean said she remains mentally scarred by the experience.

He said: ‘She was so traumatized she didn’t want them to touch her.

‘They estimated recovery to be around October.’

Despite everything, Dean is determined to see the positive side of events.

He said: ‘I wouldn’t change it. Leon is my friend of over 30 years and we’ve been through a hell of a lot together.

‘We’re like brothers. I would go anywhere he needed me to go.

‘We were sad that it happened to us but honestly we’re glad it was us and not the other car, because there was more people in there.

‘We’re not bitter because it could have been so much worse.’ 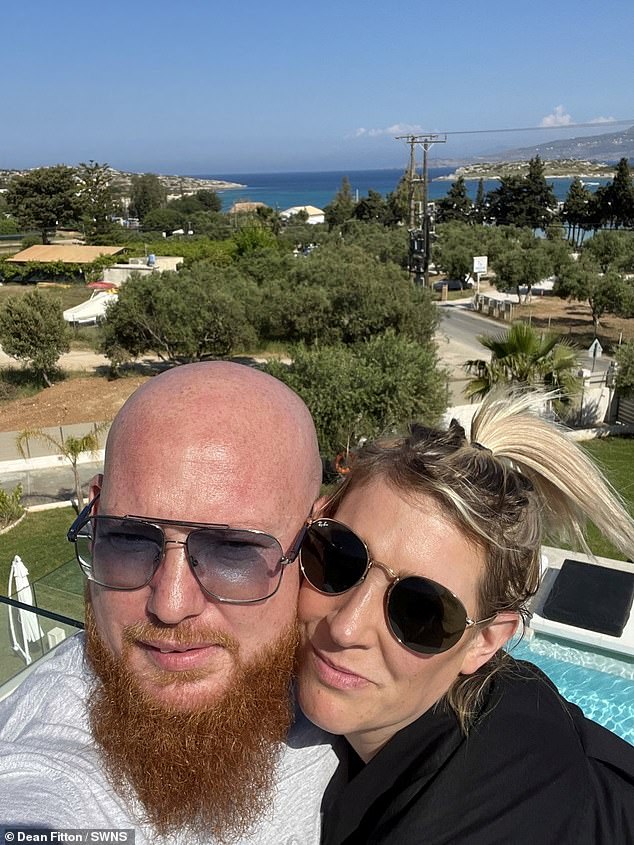 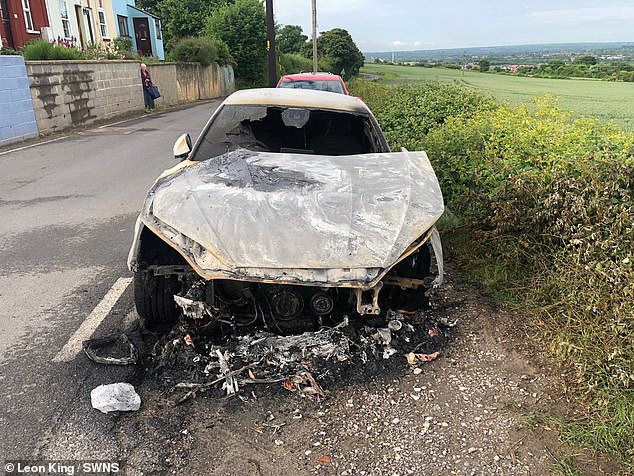 The car carrying Dean and Gemma was the fourth vehicle in a convoy on the way to the wedding venue, and it span onto the other side of the road after being crashed into – leaving Gemma needing attention for a serious back injury at Pembury Hospital

Shocked groom Leon said he saw his friend suffer the serious car accident in his rear view mirror, as he was in the car at the front of the convoy 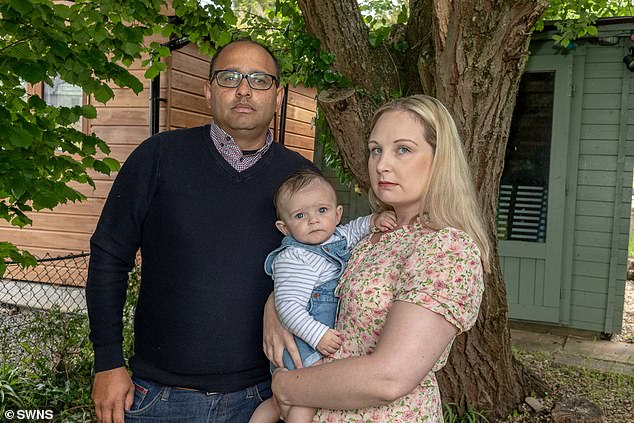 In a peculiar twist, when Leon returned back from Crete to his home in Wouldham, Kent, his car inexplicably burst into flames, with best man Dean and his wife Gemma’s luggage still inside – capping off the week from hell

Leon was simply glad everyone survived when he returned home – only for his car to explode into flames that night.

Neighbors called the fire brigade when his Audi, which still had poor Dean and Gemma’s luggage in it, burst into flames at around 1am on Wednesday.

The fire service said they believe the fire had started accidentally in the engine compartment due to a fault and Leon is now calling for answers from Audi, which has been approached for comment.

He said: ‘Luckily my wife and six-month-old son where not in the car at the time.

‘Having the car catch fire has just compounded everything.

‘I just can’t see how this has all happened in the space of a week.’