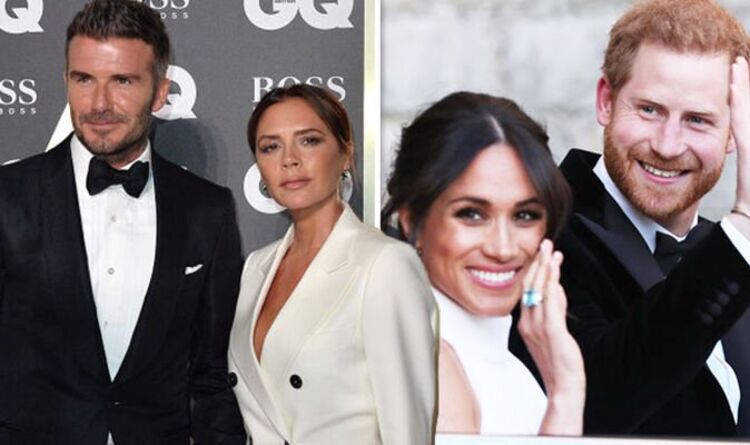 Prince Harry and Meghan Markle drove off in style in a silver blue Jaguar E-Type after their wedding at Windsor Castle in 2018. David and Victoria Beckham replicated a similar look as they attended their eldest son Brooklyn Beckham’s nuptials.

Brooklyn, 23, and his now-wife Nicola Peltz, 27, tied the knot in a star-studded wedding at Palm Beach on Sunday.

A host of celebrities attended the lavish ceremony held at Nicola’s dad’s £76 million mansion in Florida.

Following the couple’s nuptials, David and Victoria hopped in a light blue vintage car to drive to Nicola’s family mansion on Sunday.

The proud mum and dad looked sensational as they drove to their daughter-in-law’s family home.

Brooklyn and Nicola exchanged their vows in an early-evening ceremony and enjoyed a lingering six-second kiss in front of celebrity guests including Eva Longoria, Mel C, and tennis legend Serena Williams.

Ahead of the ceremony, the oceanfront garden of the compound was prepped with three large marquees.

The festivities kicked off at 6pm and the following day the family enjoyed a brunch, which was being held at a huge marquee, which was set up in sprawling tropical gardens at the back of the Peltz home.

According to reports, Prince William and Kate Middleton were invited to Brooklyn’s wedding but were unable to attend.

Prince Harry and Meghan Markle, who live in the US, however, were not invited to attend the big day.

A source revealed to the Sunday People: “David and Victoria wrote to William and Kate inviting them and the family to their son’s wedding, and William replied wishing them a great deal of joy but they are unable to attend.

“It was always about them, it was never about Meghan and Harry. They are the people David and Victoria are attached to and it’s always been about them because they’ve had a long history together.”

Meanwhile, fashion designer Victoria said she was looking forward to “an exciting weekend” ahead of the star-studded nuptials in Florida.