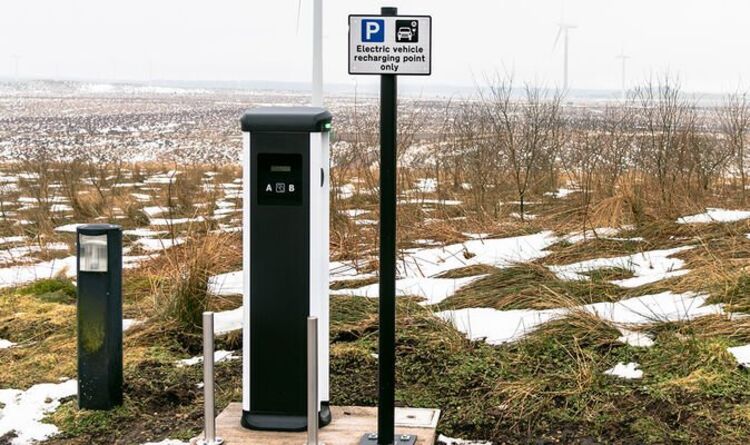 While the Government is pushing for a switch to electric vehicles (EV) from petrol and diesel cars, there are still a number of issues that need to be resolved in order for the public to feel comfortable enough to buy an EV. And the efforts to convince the motorist to make the switch have most recently been undermined by the struggle to use public charging stations in areas of poor mobile phone reception.

Most public chargers require the use of a smartphone app, and while motorists making 999 calls can roam across other providers’ networks, they cannot do so for any other reason.

A recent study carried out for the electric vehicle energy task force appointed by Boris Johnson revealed that this issue might be experienced along more than 20 percent of the length of A roads and B roads in 22 local authorities.

The study’s purpose was to check whether drivers were able to use their phones to turn on and pay for charging via an app.

The figures revealed that remote parts of the British Isles were worst affected, with 56 percent of Argyll and Bute, in Scotland, lacking sufficient connectivity for reliable charging.

But there are also significant gaps in the home counties, with Sevenoaks, Kent, and Maldon, Essex, at 11 percent.

Similarly in Richmondshire, North Yorkshire, 28 percent of the roads had gaps in connectivity.

Several drivers have now shared their frustrations on a forum for customers of ZapMap, an online map of UK charging points.

A motorist at a PodPoint charger at the Hawes National Park Centre, in the Yorkshire Dales National Park, said: “Successfully charged yesterday but only by confirming on café wi-fi.

The Times reports that the Government will spend £1.6billion on expanding the public charging network from 30,000 to 300,000 chargers by 2030.This in turn exceeds the 66,000 spaces at petrol stations because it takes so much longer to charge up a car than to fuel it .

The 70 percent of the population with private off-street parking will be able to install home chargers.

Grants of £350 have been claimed by 277,000 households, but the money has already run out and is no longer available.

From June, all new homes, or those undergoing “significant” renovation, must have vehicle charge points.

Motorists undertaking longer journeys will have to rely on public chargers, which cost more than charging at home and can involve juggling dozens of payment cards and phone apps.

Quentin Willson, who leads the FairCharge campaign to improve support for electric vehicles, said: “We’re asking consumers to jump through hoops. All these charges ought to be done with simple contactless cards, so you pay for your electricity like you pay for your petrol.

“If we continue to make it difficult for consumers to change their behavior and buy electric cars, and not have confidence in the infrastructure and whether it works or not, we’ll lose the battle.”

The task force appointed by the prime minsiter has urged Ofcom, the telecoms regulator, to publish maps warning motorists when charging stations are in mobile “black spots” — areas without reception — or “not spots”, where one or more of the four UK networks — EE, Three, O2 and Vodafone — does not work.

Ofcom said the government’s shared rural network strategy was increasing mobile reception, and added: “Ensuring reliable mobile connections at charge points will require energy providers to work directly with mobile operators, which we are ready to help with.”