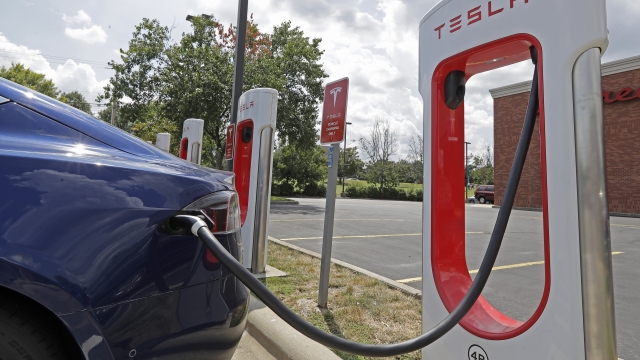 With high gas prices, the appeal for electric vehicles is rising.

As Americans continue to pay extremely high prices for gasoline, electric vehicle charging stations are booming around the country.

New Jersey is handing out $1 million in grants to install charging stations in 24 tourist destinations.

“For a small state (we’re) a leading state in the development and the promotion of electric vehicles,” said Joseph Fiordaliso, president of the New Jersey Board of Public Utilities.

While some drivers around the nation are paying over $5 dollars a gallon, Dmitriev, who drove his Tesla from Chicago to Brooklyn, New York, says he’s saving money.

With electric vehicle charging stations popping up across the country, New Jersey is betting the public will embrace electric.

“It’s amazing to hear that people are spending $100 to fill up their tanks, so more people are probably looking into electric vehicles,” Fiordaliso said.

He said one of the hesitations for people buying electric vehicles is range anxiety.

“Where can I charge it? Not only in our tourist attractions, state parks, but also along our major highways. So people don’t have range anxiety,” Fiordaliso said.

Part of the mission is to provide sufficient power for a visitor to journey home after a day in town.

In New Jersey, there are about 650 public charging stations. The goal is to bring in more tourists using sustainable cars.

Drivers use the Greenspot app to make sure they can charge their cars.

To use the app, set your location and it gives you the closest one to you.

“Just to know that there are more stations, I’m safer if I need to charge,” Dmitriev said.

Dmitriev is just getting started. Since December, he’s logged nearly 3,000 miles in his Tesla — running only on electricity.

“I feel that on the main roads the network is established very well. There are plenty of chargers to feel safe,” Dmitriev said.