For the love of cars 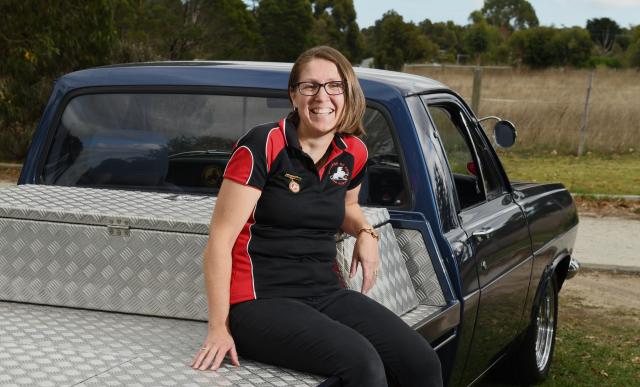 LOVE AT FIRST SIGHT: When Bronwyn Johnston first met her future husband, David, he was showing this modified 1966 HR Holden at a car show.

IT was love at first sight when Bronwyn Galwey met husband to be, David Johnston, at a car show in Shepparton nearly 20 years ago.

What Bronwyn saw was David and his deep blue 1966 modified HR Holden.

“It was the whole package,” laughed Bronwyn, “I probably fell for both the car and David.”

While originally hailing from Mount Gambier, Bronwyn was living in Shepparton at the time but love soon pulled her back to the South East where she joined David as a member of Mount Gambier’s Holdens of Age Club.

“I’ve always had an appreciation for cars,” said Bronwyn, “my father likes his Fords, but I like Holdens.”

With HR’s being a favourite, it was no surprise that David’s soon became known as her car.

“When I first came on the scene at the car club there was a display at the Blue Lake and the newspaper wanted a photograph of the HR,” said Bronwyn.

“David is camera shy, so I was the only one in the photo with the HR, and the newspaper captioned the photo ‘Bronwyn with her car’.”

The couple were married in November 2005 in a ceremony that demonstrated they were united by cars with 1956 and 1957 Chevrolets as wedding cars and the beloved HR driven to the ceremony too in recognition of the important part it had played in the union of these two car lovers.

Today the two continue to take the HR to car shows and club events where Bronwyn is one of few “chicks” driving an old holden.

They have collected an impressive swag of trophies at show and shine events around South Australia, Victoria and New South Wales but more importantly they remain united by their love of one another and the HR that brought them together.

As the current treasurer of the Mount Gambier Holdens of Age Car Club, Bronwyn has her hands full with all the requirements of being a treasurer, including preparing membership packs for new members which are always welcome.

She also helps when needed with the conditional registration paperwork.

Formed in April 1999, the club is for Holden vehicles that are at least 21 years old.

With nearly every model of old Holden represented among his membership of about 48, the club meets at 7.30pm on the last Wednesday of each month at the South Aussie Hotel and club runs are also held once a month.