It seems apt that Journey’s song Don’t Stop Believin’ gets an airing on board Forest Green Rovers’ electric coach, as it quietly eats up the final mile of the trip to the Memorial Stadium on Saturday, three hours before the Gloucestershire side cement promotion to League One with a 0-0 draw at Bristol Rovers, becoming the smallest club to reach English football’s third tier.

Forty years after lifting the FA Vase against Rainworth Miners Welfare and toasting promotion from the Hellenic League Premier Division, the ninth tier of English football, Forest Green will soon be preparing to host Derby, Ipswich and Portsmouth. The goalkeeping coach, Dan Connor, is the unofficial DJ and controls a diverse playlist that ranges from Rihanna to Fleetwood Mac and Outkast. “I’m open to requests on the way back,” he says, smiling.

Rob Edwards, the impressive Forest Green head coach, the head of football operations, James Mooney, Connor and three of the team’s locally based players – Dom Bernard, Kane Wilson and Josh March – are among the first to board the coach just before 10.30am for what is a historic journey: Forest Green are the first team in the world to travel to a sporting event in a zero-emissions vehicle.

“Let’s go,” says Edwards as the coach pulls out of another way before snaking through Nailsworth, a town home to about 7,000 people, the colorful Saturday farmers’ market in full flow. The topic of conversation equally takes many twists and turns, from Tyson Fury’s fight against Dillian Whyte, Clint Eastwood and even vacuums, as we pass Dodington Park estate, which is owned by James Dyson.

The rest of the squad, all wearing recyclable tracksuits, some players carrying reusable water bottles, get on at a hotel on the outskirts of Bristol after watching the start of Arsenal v Manchester United while eating lunch; baked potato, beans on toast, vegan bolognese, fruit and soya-based yoghurt are among the options. On longer trips away, they sometimes stock up at a falafel van in a lay-by off the M5. Apple crumble is another favorite among the players. “We had a roast yesterday,” the goalkeeper Luke McGee says. “It would have been the first time a lot of the lads would have had Quorn log. They were all looking at it like ‘hmm’ and I was like ‘trust me, have a bite and you’ll be having it’ and they all polished it off their plates.”

When they board the coach at 1.10pm Edwards’s message from the pre-match meeting is fresh. “You’ve got to die before the ball goes in the back of the net today,” he says. “You’re in an unbelievable position. [It is a] fantastic day for us. Go and enjoy it. Go and make the most of it … stick together. I wish you all the best.”

Wilson says the players have been ribbing Andy, the regular Forest Green coach driver who has been relegated to driving the supporters’ coach, that he has been dropped for the day. The 48-seat electric coach is manufactured by the Chinese firm Yutong and would cost £325,000 to buy. Forest Green have hired it from Westway Coaches, which has transported the royal family for several years. The coach has a range of about 200 miles and the battery takes two hours to charge. The driver, Jamie Thomson, counts Bill Gates as his most high-profile passenger, after taking him from the British Museum to Windsor Castle under police escort. “This is the future,” Thomson says.

Never has so much comfort surrounded a bus. Camera crews hover and supporters linger as Dale Vince, the club’s owner, gives a thumbs-up on arrival. In stark contrast, non-league Stockport County recently flew to Eastleigh and last year Manchester United made the 100-mile trip to Leicester by plane. But Forest Green are wedded to their beliefs and plan to acquire an electric coach to travel to some games next season. Edwards, Henry Staelens, the chief executive, and the kit man, drive electric cars.

“This is the last piece of the jigsaw for us,” Vince says from the front of the bus. “The way our team travels is probably the biggest thing within our control that we hadn’t yet dealt with. Beyond that the really big thing we’re going to do is move to Eco Park, [a new stadium] built from wood, which has the lowest carbon footprint of any material in the world. It is good to be pushing the boundaries, otherwise you get a lot of box-ticking.”

Last week the club received permission to start building their training complex, which will be a hub for the men’s, women’s and academy teams. Nestled in the Cotswolds, the club who play on an organic pitch perched at the top of Spring Hill is making a big impression, and not for the first time. At the final whistle, Forest Green supporters flood the Bristol Rovers pitch and a couple of dozen of home fans bedecked in St George’s fancy dress decide to join them. The hosts recognize an opportune moment to put on the sprinklers as March is carried aloft by joyous supporters. Dan Sweeney hijacks a television interview to hoist his manager on to his shoulders. Matty Stevens, their leading goalscorer who will undergo surgery on a cruciate ligament injury on Wednesday, is part of the celebrations.

Edwards heads back down the tunnel, his gray jumper soaked in champagne. Half an hour after the final whistle, Tom Huelin, the fitness coach who overseas nutrition, sports science and, crucially, “food logistics” carries a towering stack of pizzas topped with jackfruit and vegan cheese into a humid dressing room away. Rice and pea protein shakes are also available. “In the old days, I was on the bus and it was: ‘Tom, can I have a protein shake?’” Huelin says. “Yeah, two scoops, shake it up, there’s powder and water flying everywhere, the driver is going mad.” 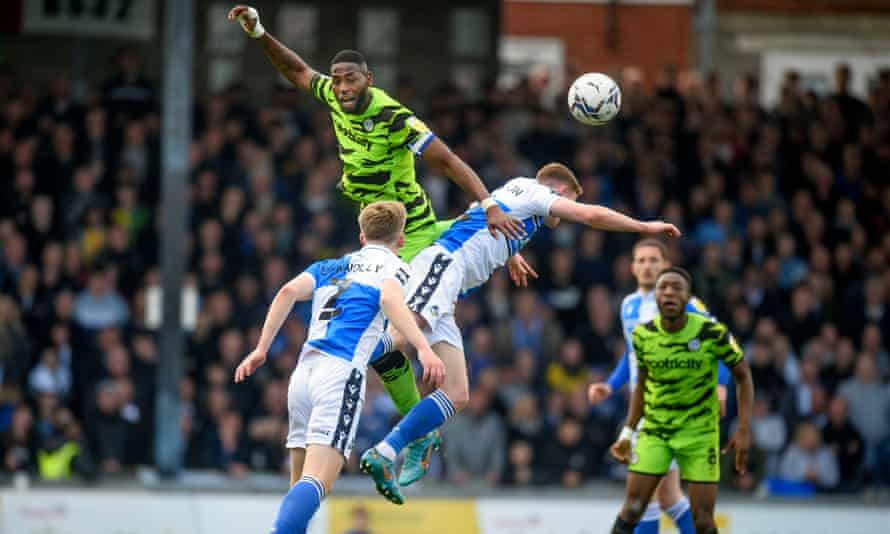 The Bristol Rovers manager, Joey Barton, pops his head in to congratulate the Forest Green squad, dance music blaring from a giant speaker. Sweeney gives an impromptu speech. “I’ve never seen a club like this, pulling in the same direction like we have … congratulations to everyone, this is going to live with us for ever.” Ebou Adams is the last player to leave the pitch. Jamille Matt speaks to his loved ones after decking down on halfway and Jordan Moore-Taylor phones his family. A local reporter cries happy tears. Edwards speaks on FaceTime to his wife and children, who watched the game on iFollow.

“The Vengabus is coming,” Connor sings. In other words, it is 6.26pm and time to exit the executive suite in the West Stand. A few fans have waited in the car park to congratulate players and staff. Adams and Matt are only too happy to pose for photos. “Dan, can we have some tunes on?” comes the first question once everyone is on board. Tiesto’s Let’s Get Down to Business is one of the first up; on Tuesday they travel to Swindon hoping to wrap up the League Two title. “It has been a long journey and time where we have been top,” Edwards says. “We want to see it out.”

“We’re on our way, on our way, to League One, we’re on our way,” soon emanates from the back of the coach as some players bang the headrests to increase the volume. Bernard leads a singalong. “Everywhere we go-o, people want to know-o,” he begins and his teammates obligingly follow. At the front, Edwards and his assistant, Richie Kyle, watch a couple of highlights from the game before making sense of scores elsewhere.

By the time everyone empties the coach – players plot a night out in Cheltenham in between embracing Vince, Mooney and serenading Baily Cargill – there is 44% remaining on the battery and Thomson is thinking about recharging at Leigh Delamere services on the route back.

The match itself is electric. The marauding wing-back Wilson, arguably the division’s standout player, is the catalyst for Forest Green’s first meaningful attack with a jinking run and two minutes later Regan Hendry has a shot cleared off the line. Adams then forces the Bristol Rovers goalkeeper, James Belshaw, into a one-handed save. Matt, Jack Aitchison and Nicky Cadden are denied by Belshaw before Luke McGee tips a curling shot by Luke Thomas round a post as the game drew towards a nervous crescendo.

“We are going up,” the 737 visiting supporters sing with gusto, the minutes ticking down before McGee makes another stunning save to secure a point – and promotion – deep into stoppage time.

“That last bit is hard but that feeling when the whistle goes almost makes all of the hell worth it,” Edwards says, laughing.