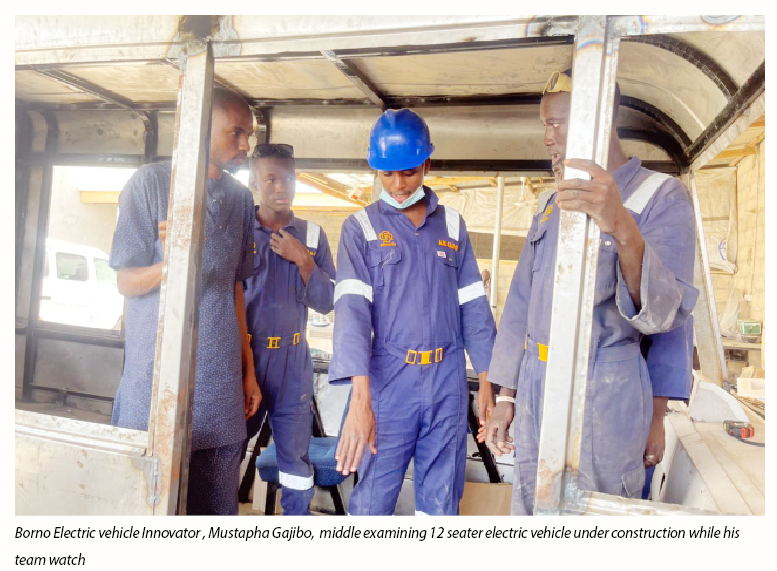 Despite dropping out of the University of Maiduguri at 300 level, Mustapha Gajibo, a Borno Citizen is making waves and realizing his world by embarking on the journey of manufacturing electric vehicles.

The feat achieved by Gajibo has been a clear message that Borno aside from decades of insurgency that ravaged the State can boast of producing vibrant youth that can shape the future.

With his innovative skills in renewable energy, the young Gajibo builds electric cars, tricycles, and generators and he does that with local manpower.

The young entrepreneur who started building electric vehicles in the year 2017 has attracted the attention of many including the Borno state governor, Babagana Umara Zulum, an indication that a very great thing is happening in the state.

Moved by his ambition in life, Gajibo quit University of Maiduguri because he was given admission to study General Agriculture instead of Electrical Engineering which he passionately wanted to study in a bid to realize his destiny.

Having heard about the wonderful exploit of Gajibo, Zulum had presented five mini-busses and N20 million cash to the talented Borno man who specializes in converting buses with petrol engines into solar-powered electric vehicles.

The support was passed to Phoenix Renewable Energy Group owned by Mustapha Gajibo.

When LEADERSHIP Weekend visited the workshop of the Phoenix Renewable Energy located around Pompomari Industrial Layout in Maiduguri, there was a beehive of activities with workers coupling some already converted petrol-powered vehicles to electric vehicles.

According to Gajibo, “I ventured into solar system installation and later to the building of electric vehicles amid my passion for solving societal challenges.”

He said from childhood, he had always developed a passion for solving problems whenever he sees them in his community.

The young entrepreneur said with funding, access to raw materials, and foreign exchange, the company can produce 5,000 electric vehicles annually.

He added that when produced his vehicles would checkmate the cost of imported vehicles, and bring down the cost of transportation caused by the high cost of petroleum products since his car won’t depend on petrol to operate.

He said: “I always love to get ideas on how to solve those problems, so I grew up with such passion. I started with a renewable energy company that was into producing solar systems for residential and industrial sectors.

“Going forward, I ventured into electric vehicles because of the problems the whole world was facing such as high cost of petroleum products, high cost of transportation as a result of the cost in fuel. And another alarming issue was the issue of global warming largely contributed by emission from petrol powered vehicles which is hazardous to the environment.

“Looking at all these problems I decided to come up with ideas of electric vehicles and also to contribute my quota in reducing the emissions in our environment.

“We started by converting normal tricycles with petrol power to fully electric, and then we moved from that to converting petrol mini buses to electric buses.

“Phoenix has now moved on from converting vehicles to full design and building of vehicles. We have built full electric buses which have a sitting capacity of 12 passengers and can cover a distance of 200km per charge. And it is fully air-conditioned with the latest technology including a voice command system.

“I’m proud to say that these vehicles were fully designed and built here in Nigeria, adding that 60 to 70 per cent of materials used for production were sourced locally.

Support from government and others

As for getting support from the state government or individuals, Mustapha Gajibo said the company has received support especially, through the Nigeria Automotive Design and Development Council which has given Phoenix Renewable Energy necessary technical support.

He said the Company has issued Phoenix license to manufacture and assemble electric vehicles in Nigeria, adding that the director general has been very supportive of his Company.

“He has been recommending us and he has even talked about our project even at the recent summit on climate change at Glasgow in his speech.

“I have met with the governor and he has facilitated a way for us to participate in the MSME clinic which was conducted last three to five months, where Phoenix Renewable Energy emerged as winners. We received the award of National Excellence on technology and innovation.

“The State government has supported our project with funding and they have promised us to also see how we develop and scale what we are doing,” he said.

Narrating his challenges, Gajibo said the fact that the innovation was new and strange to the people, they initially doubted his ability to run what he had proposed.

He said the first challenge he faced was in the beginning when he felt like he was alone on his own planet.

He said,” This is something that has never been done in Borno State, so everyone wanted to see how it was going to work. Nobody understands what you are doing. So bringing people who would think the way I think, who would share my type of vision was a challenge.

“So, the formation of a team that could come up with such technology was a challenge. But thank God I was able to get good people that share the same dream and we formed a formidable team.

Another challenge, according to him, was the sourcing of raw materials. This is something that hasn’t been done. It is not something you would go to the market to buy the materials. In fact, for some materials you have to source them outside Nigeria, some you have to go outside the state.

Speaking further, the inventor said, “Access to funding was another challenge, the whole issue needs a lot of funding. For instance, building prototypes, deploying proof of concept, and pilot schemes need a lot of funding. We faced challenges doing that because, from the beginning, we did not get support from any individual or government.

“It was the proceeds from other projects that we were using to go into the electric vehicles. Another big challenge for us is access to foreign exchange. Foreign exchange to source for raw materials outside the country.”

Gajibo lamented that most of the government policies are not favorable for his business. For instance, he said that he has not been able to source Forex at the official price.

“We have to go getting them through the black market,” he said, which according to him, in turn, makes the cost of production extremely high.

He said, “We call on stakeholders to come up with policies that would make companies like ours have better access to foreign exchange.

“It is through companies like ours that the value of Naira can appreciate to Dollars. As I am speaking, we have a lot of people outside Nigeria who are interested in our products.

“We have interests from Ghana, Uganda, Kenya, Senegal, and Guinea Bissau. All these countries are ready to buy our products and we can sell to them in Dollars, and we will be bringing an inflow of Dollars and, in turn, adding value to our Naira.”

He urged stakeholders to look at the problems in the sector and address them.

“The government and critical stakeholders in the finance and manufacturing sector should be thinking about policies that encourage start-ups, that was how the Chinese made their currency strong.