With the cost of the new Gen3 program ballooning – including the engine development program, Auto Action Publisher Bruce Williams poses the question… Have the Supercars Gen3 development team missed an opportunity to introduce a currently available, contemporary and more market-relevant Chevrolet V8 engine for the upcoming Camaro? Hey thinks they have!

It might not be known to all, but there exists a race proven, production Chevy V8 that could well have been fitted to the new Camaro – it would have been a close technical match to the Gen3 Mustang’s 5.2-liter DOHC Coyote V8, and an engine that could present an opportunity to cut the build costs and we could have two similar engines the Gen3 Supercars…. The yet to be released 2023 Chevrolet Corvette Z06 is powered by the 5.5L DOHC LT6 engine, the highest horsepower, naturally-aspirated production V-8 to hit the market. Should this have been the power plant for the Gen3 Camaro?

Officially known as the LT6, the 5.5-liter Chevrolet V8 is the modern double-overhead camshaft design that will be fitted to the upcoming 2023 Corvette Z06 road car. This is no ordinary road car engine – it comes with the promise of 670 horsepower (really!) at 8400 revs, naturally aspirated!

However, instead of evaluating the LT6 as the rival for the Coyote V8 that’s fitted to the road-going Ford Mustang, Supercars has continued with its development program for the hybrid LT small block-based pushrod V8 that’s been around, evolving at Chevrolet, since the late 1990s. The new race engine block is pure race derived and it is used in the engines that power the Cadillac Racing Dpi-VR sports prototypes that compete in the IMSA WeatherTech SportsCar Championship. New Gen3 Chevrolet LT V8 development engine headed for the new Camaro, as unveiled during the Gen3 launch at the Bathurst 1000, 2021

All seems to be progressing well, but the development cost are starting to grow, insiders report that engine pricing has now ballooned beyond $75- $80,000 per engine – well up on the originally targeted cost of $65,000. The increase in cost is partly due to the development required to achieve engine parity with the Ford Coyote in Gen3 and the Chevrolet LT engine, two powerplants with vastly different basic architectural concepts and cubic capacities.

And while it seems that increasing costs are going to be an issue, part of the development costs of these new power-plants is to have an engine that will run for longer without big rebuilds, and the claimed key advantage of the new engines, both red and blue, is that they should run maintenance-free for a full season, saving the teams money in the long run.

Full details of the LT6 engine reveal a Corvette engine for the road that builds on the competition version of the LT6 which has powered Chevrolet’s Corvette C8.R endurance race cars since 2019. Among the many successes for the Corvette C8.R are six victories and seven pole positions in IMSA’s 2020 sports car championship series in the USA, with another six fastest laps in the GT class. During the 2020 series, Chevrolet won the GT manufacturers’ title – its 13th since 2001 – as Jordan Taylor and Antonio Garcia in the #3 Corvette C8.R won the GTLM Drivers and Team Championships. Much more recently, just over two months ago, the team of Nicky Catsburg, Jordan Taylor and Antonio Garcia raced a Chevrolet Corvette C8.R to victory in the GTD PRO class of IMSA’s 12 Hours of Sebring contest.

The same high-tech LT6 engine will power the yet-to-be-released GT-3 competition vehicle, which will no doubt soon find its way to Australian competition via the GT World Challenge Australia series and probably the Bathurst 12 Hour.

General Motors claims that the all new LT6 is the highest-horsepower naturally-aspirated V8 to hit the market in any production car – ever – and marks a return to natural aspiration for the track-capable performance model, (noting that the 2015 Chevrolet Corvette Z06 was fitted with the supercharged 6.2-liter LS9 V8).

As well as big power, the engine has an 8600RPM redline and full racing style dry-sump oiling system, as well as highly-developed and tuned induction and exhaust systems. In combination with the hi-tech there is also a low-inertia rotating assembly rooted in an all-new short stroke-flat-plane crankshaft that, along with lightweight forged aluminum pistons and forged titanium connecting rods.

Each LT6 is hand-assembled by master engine builders in the historic Bowling Green factory in Kentucky, where all Corvettes are built. So, given that a Gen3 Supercars engine would be required to run a season on a single rebuild, it would seem likely that a slightly detuned LT6 would easily deliver comparatively similar performance and durability to the Ford Coyote motor.

GM Performance insiders tell AUTO ACTION that the LT6 is not available as a ‘crate’ engine just yet, but hot-rodders and tuners in the USA will have access to the engine soon after the road car is released.

Australian distribution might possibly arrive several months later. The expected cost of an LT6 crate engine could be in the region of US$30-40,000. And, of course, there is already a race engine program in existence to support the Corvette C8.R – in the IMSA GT/GTLM endurance and upcoming GT3 programs.

So, while on paper the LT6 seems like the perfect starting point to take the fight to Ford… there is a big ‘but’ – it seems it’s not as simple as substituting the LT6 engine as the Camaro Gen3 power plant. 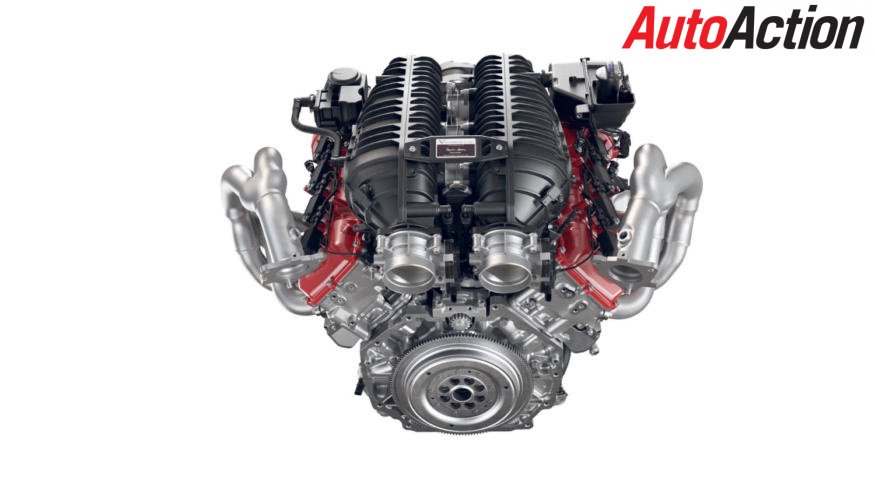 The LT6 has direct port fuel injection, and that is specifically ruled out in the Gen3 regulations, which require the use of a single throttle body injection system. The LT6 induction could be changed, but that would mean changes to the cylinder heads and an expensive inlet manifold and throttle body development program.

Maybe that was seen as a bridge too far, so the Gen3 Supercars Camaro will be powered by the hybrid GM Performance engine made up from various GM-supplied components and parts from other suppliers, similar to the current Supercars engines. The Gen3 Camaro continues to be developed with the LT based engine. MTR images

So while the opportunity to have two very similar and modern engine platforms may have escaped us for now, this hybrid LT designated engine does have its origins in the current production Chevrolet Camaro and has real race winning heritage.

The platform (the engine block) is from the current LT family of engines and is the same component that is used in the Cadillac Racing Dpi-VR sports prototypes that compete in the IMSA WeatherTech SportsCar Championship, and an 6.2-liter LT1 powers the current Chevrolet Camaro SS road car.

On the back of the development of the Gen3 engine, GM Performance are going to promote the connection with the Supercar engine and its range of crate engines and components – so hot-rodders and racers will soon be able to buy and/ or build their own version of the Gen3 Camaro race engine.

But could the impressive LT6 – perhaps with a small change to Gen3 throttle body regs – have provided the cost-effective and market relevant solution for Chevrolet Camaro Supercar teams?

For more of the latest motorsport news pick up the current issue of Auto Action.