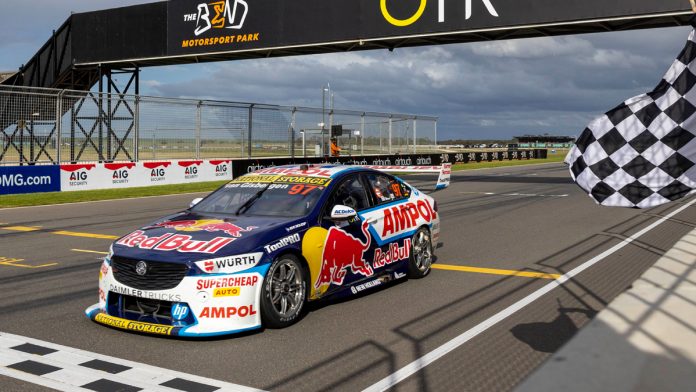 Shane van Gisbergen flashes across the line at The Bend. Photo: Supercars.

General Motors’ Holden wrapped up the Supercars Champion Manufacturers Award on the weekend at The Bend by virtue of Shane van Gisbergen’s three-peat of race wins.

The Champion Manufacturers Award in Supercars is decided in favor of the manufacturer that wins the most races in a Supercars Championship season.

van Gisbergen’s final win on Sunday was the 18th race win of the season for the ZB Commodore, giving GM an unassailable lead over Ford. The Kiwi has won 14 races this year while Walkinshaw Andretti United’s Chaz Mostert has claimed four.

Mustang drivers have won five of the 23 races completed so far this year. There is due to be 34 races in the 2022 championship.

It’s the 15th and final time that Holden has won the Champion Manufacturers Award given Commodore will race for the last time in the season-ending Adelaide 500.

The Champion Manufacturers Award was first presented in 1999 when the Supercars Gala Dinner was first established.

Earlier this year the brand became the first to win 600 ATCC/Supercars Championship races via van Gisbergen at Wanneroo.

General Motors’ Chevrolet brand will replace Holden in next year’s Repco Supercars Championship with the arrival of the new Gen3 Camaro to the grid.

The next round of the Repco Supercars Championship is at Sandown on August 19-21.

With over 20 years in the Australian motorsport industry, Noonan is the head of V8 Sleuth. He’s held a range of roles including working in television with Seven and Ten, print media and public relations. With a specialty in Australian motorsport history, he’s known around racing paddocks as ‘the Sleuth’ and started his motorsport media career in 1997.