How The 1968 Alfa Romeo Carabo Shaped The Future Of Supercars 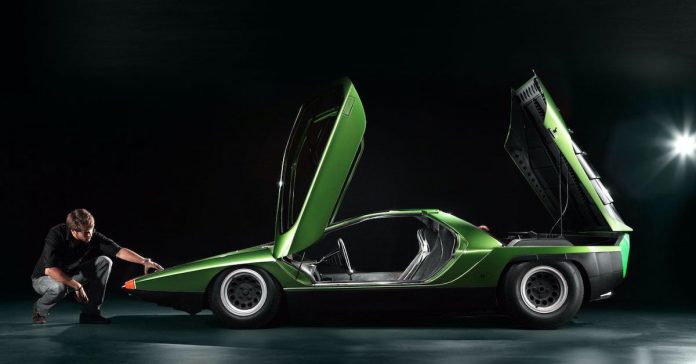 It’s claimed that it was Abraham Lincoln who said, “The best way to predict your future is to create it.” Whether the 16th President of the United States actually said that or not, the point here is that the statement is entirely true.

We know those are true words because it is time-tested. Alan Kay’s rendition of that maxim rings the bell louder in the corridors of science and technology; “The best way to predict the future is to inventory it,” he said. Alan Kay might as well be talking specifically about the 1968 Alfa Romeo Carabo, even though he said those words three years after the Carabo debuted at the Paris Motor Show.

The Carabo (beetle) was a concept car designed by Marcello Gandini of Grupo Bertone, an Italian automotive styling powerhouse. The chassis was based on an Alfa Romeo 33 Stradale. It is a mid-engined 2.0L V8 engine tied to a 6-speed Valerio Colotti manual transmission. Looking at the car, you can tell that Alfa Romeo just let young Gandini explore his wildest imaginations.

Thanks to the Carabo, those imaginations aren’t so wild after all. Carabo remained a concept, but big chunks of its body and soul went on to be replicated in future supercars, starting with Lamborghini’s Countach and Diablo.

Gandini certainly dressed the Carabo for the future, but underneath the skin lay what had come before, specifically, a detuned Stradale powertrain.

The naturally aspirated V8 motor produced 227 hp at 8,000 rpm and 148 lb-ft of torque at 7,000 rpm. So equipped, the beetle could top 155 mph vrooming from 0 to 60 mph in 6.4 seconds. It’s a good thing then that Carabo is fitted with ventilated disc brakes on all four wheels, improving speed reduction ability and running cooler in normal operating conditions.

The twin-cam configuration also improved combustion since the spark plugs are positioned in the middle of the combustion chamber.

Unlike the steel body/metal frame chassis common in Italian supercars of that era, the Carabo featured an aluminum and steel tubular chassis, an aluminum body attached to a steel frame and held together via tubing. The chassis contributed to Carabo’s lightweight. At just 2,205 lbs, the 1968 Alfa Romeo Carabo is even lighter than the Mazda MX-5 (Miata).

Carabo’s full-body dimensions are 164.4 inches long, 70.3 inches wide, and 39 inches tall. In other words, the average American male is much taller than the prototype that helped shape the future of supercars. The low, flat design meant poor visibility from behind the steering wheel, but that design flaw didn’t matter. Carabo came to town mainly to show others how old they are.

The car got its “beetle” (Carabus auratus) nametag as a nod to its unique iridescent green and gold colors, plus the orange hood that mimics a bug’s antennae and legs.

Related: Racing Icon: The Lancia Stratos, One Of The Rallying All-Time Greats

How The 1968 Alfa Romeo Carabo Shaped The Future Of Supercars

To shape the future, one must blaze a trail. In the case of the revolutionary Alfa Romeo Cabaro, trailblazing could mean creating new paths as well as rebuilding an overgrown, long-forgotten pathway. In the ’70s era, when the Carabo was born, boxy-shaped car design was the norm. Gandini’s Carabo didn’t just deviate from that norm; he took the rectilinear form a notch further.

The 1968 Alfa Romeo Carabo radicalized the design of supercars via the angular wedge shape design. Other automotive companies, including Toyota (the model EX-3) and Ferrari (models P5, P6, and Pininfarina) also debuted wedge car concepts in that particular time period, but none were as angular as Gandini’s Carabo. In any case, everyone agrees that Carabo pioneered the wedge form and scissor door design that eventually stuck with automotive manufacturers and gearheads for a long time to come.

Gearheads like to think that Marcello Gandini was already thinking about the future of aerodynamic design with the prototype Carabo. That makes more sense than the alternative, which would be that the man simply unleashed his fantasies, which, come to think of it, is just as well.

Still and all, the scissor door that seemed so ingenious and artistic was actually Gandini’s solution to the rear visibility problem presented by Carabo’s lack of a rear window. In reality, the driver having to lift the door and lean out to see behind the car doesn’t sound so ingenious, but Alfa Romeo won’t tell.

The wedge design craze spread as far as the USA, Japan, and the rest of Europe. Due to the intoxicating influence of Cabaro’s dramatic slope, the sharp body lines began to appear in Chevys, Fords, Maserati, Lotus, and many others.

Carabo would never be more than a concept, so Gandini grabbed the opportunity to bring those wild, innovative ideas to the production line through the Lamborghini Countach. In fact, the 1974 Gandini-designed Countach was the first production car ever to have scissors doors.

Gandini’s protégé, Giuseppe (Nuccio) Bertone, was inspired by the Carabo to create the radical Lancia Stratos Zero concept unveiled at the 1970 Turin Motor Show, although the design of the car is generally attributed to Gandini as he was the head designer at Bertone styling house.

By the early 1990s, the wedge craze was already wearing out. Automakers were swapping the ruler for a compass. However, the 1968 Alfa Romeo Carabo left a lasting impression on the supercar world. To date, supercars are still flat and wide, and Lamborghini is still sporting the scissor door.

These Crazy ’70s Concept Cars Left Us Scratching Our Heads

Philip Uwaoma, this bearded black male from Nigeria, has single-handedly written more than a million words in the form of articles published on various websites, including toylist.com, rehabaid.com, and autoquarterly.com. Of all the websites and platforms Philip’s work appears on, the absence of his name attached to the articles published on Auto Quarterly is the only one that makes him moan; “ghost writing sucks.” Albeit, Philip still won’t shy away from writing as a ghost. After all, it’s the value he adds to human life with his pen that fuels his passion for writing. He has no dog, no wife- yet- and he loves Rolls Royce more than he really should.