Home Electric Cars I was skeptical about EVs — until I started driving this electric...
Electric Cars 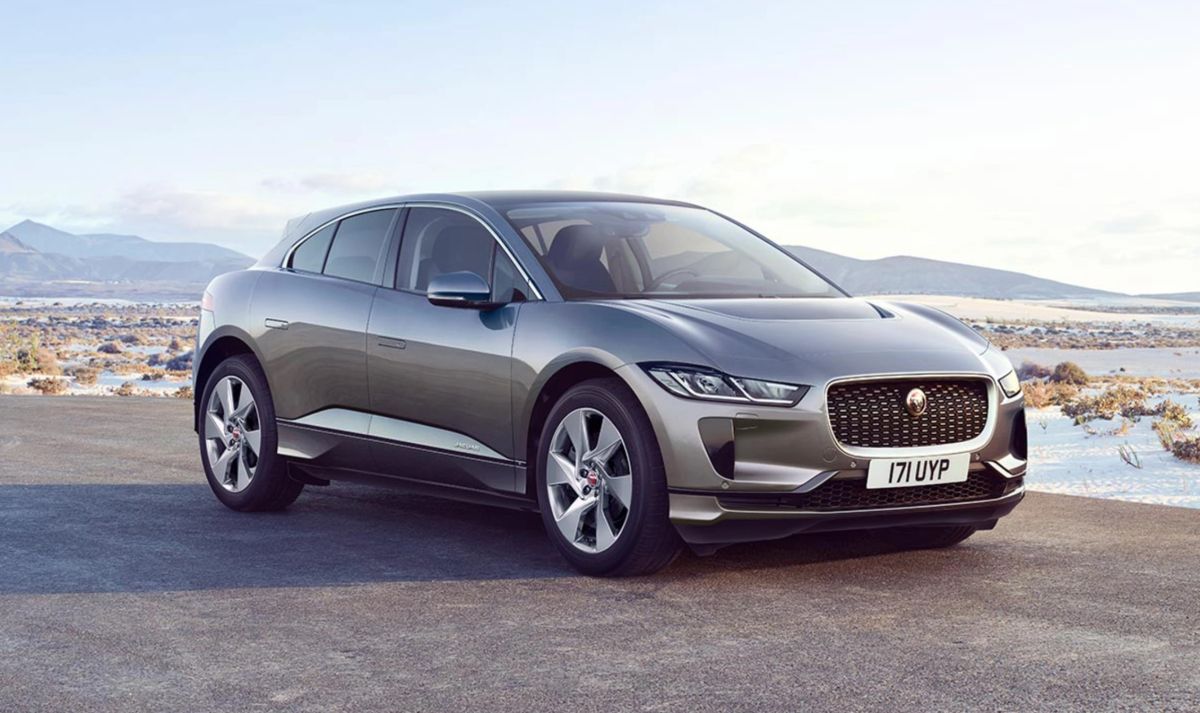 Just over a year ago, a flatbed truck pulled up outside our house, complete with a shiny new Jaguar I-Pace strapped to the back.

My partner was waiting with barely concealed, childlike excitement and the fact that he wasn’t jumping up and rubbing his hands down together is a testament to his resolve. He had decided to lease a new car, and after much deliberation, decided to make the jump to electric.

A lot of thought went into this decision, including the economic and environmental implications of owning an EV. But, most importantly, he had fallen in love with the I-Pace’s sleek and shiny look.

My partner is a Powerlifter and powerlifting coach, which means attending competitions all over the UK I was worried about whether the I-Pace would be able to handle those long stints of motorway driving, or would it mean lots of waiting around to recharge?

The first drive changed everything

Still, the I-Pace was here to stay, and it was already looking very impressive in the driveway. The only thing left to do was take it out for that all-important first drive. While it was just a quick trip through the local roads, this ended up being eye opening in more ways than one.

First, I couldn’t get over how quiet the car was. The complete lack of sound was incredibly strange. Second, the drive was smooth, comfortable and oh-so-fast.

First, I couldn’t get over how quiet the car was. Normally I drive a diesel Skoda Octavia VRS, so the complete lack of sound was incredibly strange. We weren’t sure it had even switched on until my partner hit the accelerator, and the car started gliding forward.

Second, the drive was smooth, comfortable and oh-so-fast.

When we finally got to some road with a 70mph speed limit, my partner put his foot down and turned the car into a silent missile. It took off so almost that my head was knocked back into the headrest and stayed there until he pulled his foot back. Jaguar may specify a 0-60mph time of 4.5 seconds, but it felt even quicker than that.

The next few weeks saw my partner driving the I-Pace driving to and from work, which is only a few miles each way, to get used to everything the I-Pace has to offer — handling, charging and checking whether the car can actually hit the 292-mile range Jaguar advertises. It didn’t, naturally, but like a gasoline-powered car your mileage is dependent on a bunch of factors — including temperature, driving speed and whether you tend to drive with a lead foot just like my partner.

However, by sticking to driving in the local area, he found the car was getting pretty close to that figure. In fact the car only needed recharging every 7 to 10 days.

But what about long distance?

The real test didn’t come until we had to head to a powerlifting competition in Lincolnshire — an area 240 miles and 4 ½ hours drive from home. We prepped with a 12-hour charge overnight, and the plan was to stop roughly halfway to top off at a 100kW rapid charger.

This is where my original objections to an EV came in — the fact you have to stop and recharge, rather than refill. But, as my partner rightly pointed out, we would have had to stop for coffee and a bathroom break at some point anyway.

We rolled up to the charging point with 38% remaining, and parked up in a bay alongside a collection of other electric cars. This is where I started to understand the camaraderie amongst EV drivers. It seems they love nothing more than to strike up a conversation, check out other drivers’ cars and chat about the finer points of electric driving.

I was quite pleased to discover this. Not just because it’s always great to meet new people, but these interactions can be a pleasant interlude while you’re waiting for your cars to charge. Plus there’s a healthy exchange of hints and tips, which can be a huge help to newbie EV enthusiasts.

Despite my initial reservations, there wasn’t actually that much hardship involved in the stop. The whole break took around 30 minutes, which was plenty of time for coffee, and topped our reserves back up to 85%. That was more than enough to get to our destination.

Once we arrived at our accommodation, we were happy to find that there was a free 22kw charger on site, meaning we could plug the car in and settle in for the night.

Falling head over heels with the I-Pace

For my partner, the rest of that weekend was spent in a gymnasium. I spent that time driving around the countryside and falling in love with the I-Pace.

There wasn’t actually that much hardship involved in our stop. The whole break took around 30 minutes, which was plenty of time for coffee, and topped our reserves back up to 85%

I have driven luxury cars before, but the ride in this felt so much smoother and — despite some of my original concerns — extremely responsive.

The interior was stylish, with a mix of leather and brushed chrome, while the seats were incredibly comfortable and versatile. You can make a vast number of adjustments here, including to the lumbar region (great for my bad back) and you can set your own specific seat requirements into the car’s memory. That way the seats can be adjusted to your personal settings, and is particularly helpful considering I am 5’11” and my partner is 5’6”.

While I enjoyed the feel and handling of the car, the one-pedal driving system does take some getting used to. Powered by the regenerative braking system, and set to the highest setting, this lets you drive the car using the accelerator pedal alone. It doesn’t completely replace the brakes — especially in an emergency — but lifting your foot slows you down much faster than it otherwise would.

Plus, as an added bonus, the car is able to recover most of your kinetic energy and add it back into your battery reserves.

The learning curve is pretty steep, since the I-Pace can slow down very aggressively if you’re not careful. I did end up lurching a few times before I got the hang of it, but one-pedal mode quickly became one of my favorite features.

Then we got to experience the savings

The drive home was pretty uneventful, and featured another break to recharge along the way. I was driving this time, and seemed to get more miles per kWh than my partner did on the first part of our trip. That meant we could afford to stop a little later, and slightly closer to home.

Once home, my new-found feeling of love towards the car was amplified when we both sat down to add up the total cost of our journey.

Considering a tank of Diesel in my Skoka would have cost us £72 ($96), and the trip would have used more than one tank, that’s a pretty significant savings. One we are greatly appreciative about.

EVs may have a higher price tag than a gasoline or diesel-powered car, but it turns out you’re going to save a lot more by not filling up with expensive fuel all the time.

A lot can change in 12 months

In the year since getting the Jaguar I-Pace, we’ve made plenty of long journeys across the length of the UK The longest was a 345-mile trip to Newcastle, which is normally a six-hour drive. But factoring in over an hour spent recharging along the way, it worked out to be just over 7.

Despite this, my partner and I have grown comfortable enough that we don’t feel the urge to plan the trip in excruciating detail. We’ve been driving an EV for long and far enough that we’ve learned a lot and become a lot more confident in our driving.

It’s even got to the point where we generally don’t bother looking for a charger until we have around 50 miles of range left. All thanks to the noticeable improvement of EV charging infrastructure over the past several months.

Granted, we have had issues turning up to find broken chargers, and range anxiety likes to rear its ugly head in those situations, (here’s how EV charging can be improved) but we’ve always been able to find an alternative pretty easily. We also discovered that a lot of destination chargers are free to use. They’re much slower than the DC rapid chargers we have to use mid-trip, but if you’re staying overnight that’s hardly a huge concern.

Our only real problem is the diversity in charging companies. Or, more specifically, the fact so many of them require you to download their app or have a specialized payment card. Thankfully, we’ve also seen more and more chargers equipped with contactless readers, so you can just tap your credit card or phone to get things going.

And the waiting hasn’t really been an issue. Recharging may be slower than refilling a tank of gas, but the fact chargers can be found all over the place does help. We’ve even used a charger outside a restaurant, which meant we could have a meal and (in my case) a couple of glasses of wine before hitting the road.

When my partner bought an electric car I had my concerns, just as many other people would in my situation. But owning one for the past year has really opened my eyes to how effective electric cars are, especially on long journeys.

18 months ago I probably would have scoffed at the prospect, but now? The Jaguar I-Pace has turned me into a true EV believer.

Of course, if you’re the type of person who would rather minimize their rest stops, grabbing a to go coffee and only allowing yourself a very quick trip to the bathroom, I can understand why you might not think an EV is particularly viable. Of course, considering the I-Pace is rocking a hefty 90 kWh battery, I certainly can’t speak for cars with much smaller power reserves, like the Nissan Leaf or Mini SE.

But if you’re one of the people worried about cost, or that an electric car couldn’t be as fun as something with a roaring engine, you shouldn’t be. I have had so much fun driving this car on all kinds of roads and in a bunch of different driving conditions. I never fail to arrive at my destination with a smile on my face.

And looking back, the reduced travel costs have been a huge selling point for me. While some may argue you’re likely to spend more on food or drink while you wait, that hinges on you not stopping to grab something anyway. Plus, considering the cost of fuel, especially here in the UK, the extra cost is still minimal in comparison.

On top of that, long distance driving is tiring, and the fact an EV forces you to stop and have a break is its own built-in safety feature.

This whole experience has been eye-opening, to say the least. I’ve come to realize that electric vehicles are a great option for a lot of drivers. 18 months ago I probably would have scoffed at the prospect, but now? The Jaguar I-Pace has turned me into a true believer, and if you’re able to give an EV a chance then the same might happen to you.