Maiden Super Formula win “not enough for me” 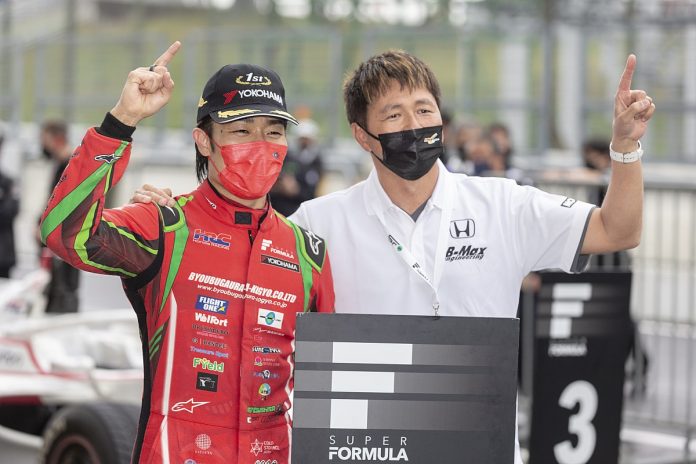 The B-Max driver made a rapid start to jump up to fifth, before passing Sho Tsuboi and Kenta Yamashita to move into podium positions.

He cleared Dandelion driver Tadasuke Makino on lap 27 of 31 after a long battle for second position and then reeled in Mugen rival Nojiri at Turn 1 on the penultimate tour to become Super Formula’s latest race winner.

However, despite the headline result, Matsushita sits only third in the championship on 20 points, having drawn a blank in the Fuji double header a fortnight ago. A stall at the start had wrecked his hopes in the season opener, before an incident with Makino left him 19th at the finish in the second race.

While pleased with his tire management skill at Suzuka that granted the one-car B-Max squad its maiden success in Super Formula, Matsushita said he is more worried about the 36-point deficit he faces to reigning champion Nojiri just three races into the 2022 season.

“Starting from ninth on the grid, I wanted it to rain,” Matsushita said in the post-race press conference.

“The start was really good, I moved up to P5, but I knew I had to manage the tires, so I only attacked on the first lap and then backed off. It was only when I saw the top two that I really started to push.

“I’m really happy, but I didn’t cry [after taking the chequered flag]. It’s just one win, it’s not enough for me.

“Nojiri is still really strong and we need to find a way to beat him in qualifying as well if we are to have a chance of the championship, so I want to work on this from now on.”

B-Max team principal Satoshi Motoyama revealed he had asked Matsushita to keep enough life in the tires to mount a late attack in the race, a strategy that paid dividends when Nojiri’s pace suddenly began to drop in the final 10 laps amid changing wet conditions.

“From the outside of the grid we knew Nobu could make a good start, we expected he could pass about five cars and he did that,” said Motoyama, a four-time champion in the Formula Nippon series that is now known as Super Formula .

“The front tires needed managing, so I told Nobu to take it easy in the first half and push in the second half because we knew that was when we could make up a lot of time.

“He had to drive not like himself, just keep his cool and endure in the first half, but he controlled the race well.”

Despite losing the win just two laps from the finish, Nojiri actually managed to extend his lead in the championship to 16 points thanks to his nearest rival Ryo Hirakawa finishing down in the seventh after a difficult qualifying session on Saturday.

Nojiri has now finished all three races so far inside the top two, including his victory in the second of the Fuji races earlier this month.

Asked to sum up his thoughts after Suzuka, Nojiri said: “It’s frustrating to lose the win, but thinking of the championship, it’s not so bad.

“At the start I made a good gap, but tire pick up was a big issue and I couldn’t stop Matsushita from catching me.

“I did everything I could, so I have no regrets, but I want to use this defeat as motivation for the rest of the season.”