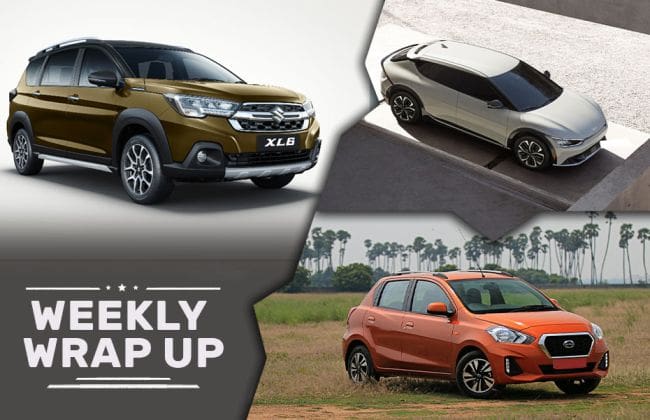 This week we saw many new launches, some major discontinuations, and details about an upcoming hybrid SUV

In the past seven days, we have witnessed some big headlines related to launches, discontinuations, and upcoming products. Two Kia cars have been spotted with CNG kits, the updated XL6 has been launched and Toyota has teased its upcoming hybrid compact SUV for India.

Here’s a quick recap of the week:

Toyota India has finally dropped hints about its self-charging hybrid SUV, through its new online campaign. Our sources confirm that the upcoming Creta rival will be revealed sometime in June, followed by a launch in August. The SUV will be shared by Toyota and Maruti and will be produced at the former’s plant in Karnataka.

A test mule of the Kia Sonet with a CNG sticker has been spotted, giving rise to speculations about its launch. It could be one of the very first subcompact SUVs with a CNG, if Maruti doesn’t launch the Brezza CNG first. Followed by that, a Carens CNG has also been spied, which will rival the only other CNG MPV, the Ertiga. Looks like these two might be the earliest turbo-CNG options in India.

Datsun has discontinued the Redi-Go, Go, and Go Plus cars in India. Nissan had earlier announced the global discontinuation of Datsun due to poor sales. However, you can still score some leftover stocks at heavy discounts.

Maruti has discontinued the base variants of the Alto and S-Presso, which were available with a single (driver) airbag. Both the hatchbacks are now offered with dual front airbags as standard.

Kia EV6 Bookings To Commence In May

Kia will commence bookings for the EV6 from May 26. The CBU (fully imported) EV will be offered in very limited numbers and is likely to be priced around Rs 60 lakh.