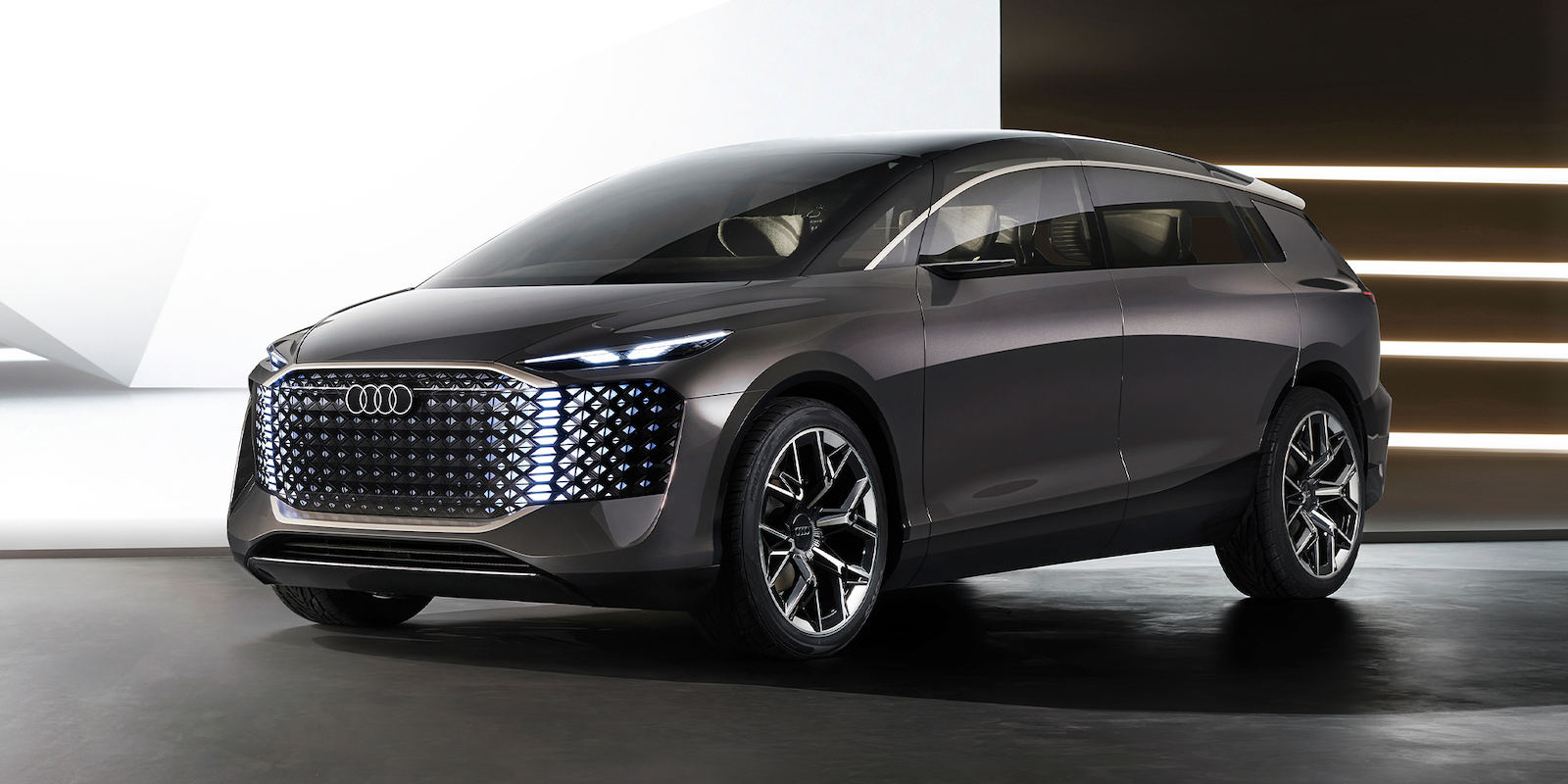 This is the Audi Urbansphere. It’s the largest, most high-tech, and one of the most luxurious cars the German brand has ever built. It teases the sort of tech you’ll be able to get in Audis before 2030. Read on for full details.

This is the Audi Urbansphere. It’s the largest car Audi has ever made but, amazingly, the German brand recons it makes the perfect car for inner-city commuting.

The Audi Urbansphere is the third ‘sphere’ concept from the German brand; the first being an electric roadster called the Skysphere, and the second was a big, posh GT car called the Grandsphere. Unlike those sleek sporty models, the Urbansphere is more like a futuristic SUV or MPV.

That said, it’s much sleeker than your average people carrier thanks to those slim headlights, subtle curves and a cool illuminated front bumper that lights up to mimic the grille on soon-to-be extinct Audi petrol and diesel cars.

It can also show animations in place of conventional indicators, show you the state of the cars’ battery, and display warnings to other cars and pedestrians.

You’ll spot a set of absolutely massive 24-inch alloy wheels at the sides, and a neat piece of chrome trim that splits the side windows to make the roof look much lower than it actually is.

At the back, the Urbansphere borrows the huge dual-diffusers from the Grandsphere concept, and the full-width pixel-like LED brakelights from the Skysphere.

Audi said it designed the urban sphere from the ‘inside-out’. No, this doesn’t mean you sit on the roof and the wheels are on the inside… It means that Audi did everything it could to make the interior as roomy as possible.

That includes giving it rearward-opening back doors with no pillar between them, swiveling chairs and an interior (almost) large enough to carry a Volkswagen Up.

Even though the Urbansphere is bigger than most minibuses, it only has 4 seats. So there’s absolutely loads of legroom inside. There’s no dashboard to get in the way, either.

Instead, a screen is projected onto a wooden panel, and you control the menus using eye-tracking and gesture controls. Just picture yourself taking Tom Cruise’s place in the Minority Report movie, and you’ll get the idea…

Audi hasn’t forgotten about back-seat passengers, either. They get to watch TV on a huge OLED TV screen that folds down from the roof. Oh, and it’s transparent – ​​how futuristic is that!?

The new Audi Urbansphere comes with two electric motors making a total of 401hp. That’s about 300hp more than a top-spec Q4 e-tron. It’s also the same amount of power as the new Audi RS3, but the Urbansphere has almost 200Nm more torque than that car. So even though it’s the size of a large van, it should still be pretty nippy.

It hasn’t been designed to feel sporty, though – quite the opposite. Audi has fitted the Urbansphere with a retractable steering wheel and enough sensors and computers that it can drive itself (in certain areas, at least).

This is all part of Audi’s plans to start introducing level 4 self-driving tech to its road cars before 2030.

The Urbansphere has been built using the same underpinnings that Audi will use in future road-going EVs. This means the 120kWh battery that gives the Urbansphere 466 miles of range should be available in future Audi electric cars.

It’s also likely that the Urbansphere’s 800-volt electrical system that enables you to connect to 270kW fast chargers could also trickle down into future production cars. In the Urbansphere, this system can add 190 miles of extra range in as little as 10 minutes.

The new Audi Urbansphere is never going to actually go on sale. But, it may influence other Audis that are only a few years away from hitting the roads.

Audi has said it plans to introduce some of the Urbanspheres advanced self-driving tech before the end of the decade, and the car’s clever motor and battery tech will appear in cars such as the upcoming A6 e-tron saloon and Q6 e-tron SUV .

Can’t wait for these new Audi EVs to go on sale? Compare the latest electric car offers or see just how easy it is to change your car with carwow. You can sell you car and get a great deal on a new one, all from our network of trusted dealers and all from the comfort of your own home. Tap the button below to get started.