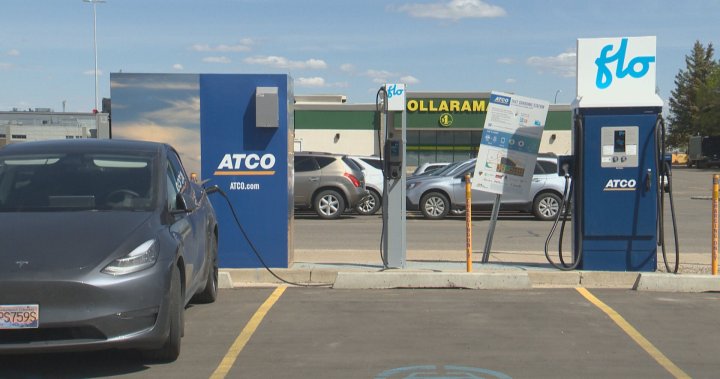 Road blocks are falling away for electric vehicles (EVs).

“We could go maybe as far as Fort Macleod, Coaldale, not much farther than that,” Sexton said. “A few years later, the Peaks to Prairies system was installed and that opened up the south for us.”

Now the group is hoping to expand that network.

“It is essential infrastructure that every community and various businesses need to start having available as the density of electric vehicles increases,” said SouthGrow’s executive director Peter Casurella.

4:35Accelerating the pace of EV adoption

With funding from Natural Resources Canada, the SouthGrow zero emission vehicle infrastructure program will provide a rebate of up to 46 per cent for businesses and other organizations installing EV charging stations.

“This is an opportunity for our municipalities and businesses to take advantage of grants that are available nationally to lower the cost of the transition,” Casurella said.

“It’s going to happen. We might as well make sure our people have as easy of a transition as possible.”

And there could soon be longer lines at those plug-ins.

How electric cars are faring on Lethbridge roads: ‘It’s small, but it’s growing’

Some Lethbridge dealerships are seeing more interest in their electric vehicles.

“It’s growing at a rate that is very hard to keep up with,” said Lethbridge Hyundai general manager Kyle Puchinger.

“With gas prices and such where they are, it has definitely made the want and need for electric vehicles grow at an amazing rate.”

According to Casurella, funding requests have been steady since the application process opened this month.

“Obviously places like hotels and car dealerships are very interested in taking advantage of it, because it’s a cost they have to incur,” Casurella said.

“There’s also opportunity for landowners who own large apartment buildings to install stations for their tenants.”