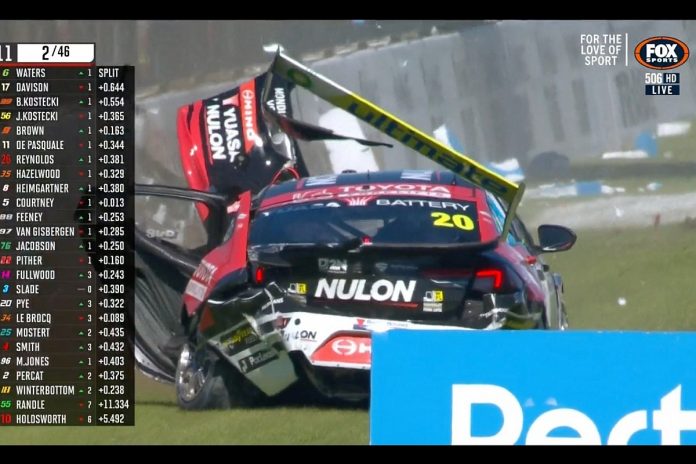 Pye drove across the front of Jack Le Brocq as he tried to defend his position on the front straight as they went to finish the opening lap.

They made rear-to-front contact on the very inside of the track which sent Pye’s Holden into the pit wall at speed.

The race was swiftly red flagged so that repairs to a gate on the pit wall can be repaired.

As for the incident both drivers hinted at the other being at fault.

Pye admitted there was clearly overlap as he went to defend, but said Le Brocq could have avoided the crash by lifting.

He also said he won’t return for either of today’s races due to the damage to his car.

“I’m fine, just disappointed,” he said of the impact. “There must have been a slight overlap, it must have been rear quarter to front bar, like… so small.

“I think sometimes people forget they can lift as well. I don’t know. I thought I was clear and tried to defend. Obviously I wasn’t, but I mean fuck, he just didn’t lift. It was massive. We’re out today.”

Le Brocq said he was sorry to see the Team 18 car so badly damaged, but countered that it wasn’t his responsibility to lift to avoid the crash.

“I came off the last corner and had a bit of overlap there. Scott just kept coming across,” he said.

“It’s no good to see any cars damaged, but at the same time, I don’t know, we’re all out there racing. It was just an unfortunate incident, I think.

“I suppose you can [lift] but then every other time he’s going to do the same thing. How many times is he going to try and run us off the road?

“It’s unfortunate to see, but I don’t know, we’re here to race. If you’re going to try and squeeze people off the track, unfortunately it might happen.”

The incident was one of two first-lap crashes, with Thomas Randle and Lee Holdsworth coming together on the way out of Turn 1.

Cam Waters leads the red-flagged race after jumping pole winner Will Davison at the start.