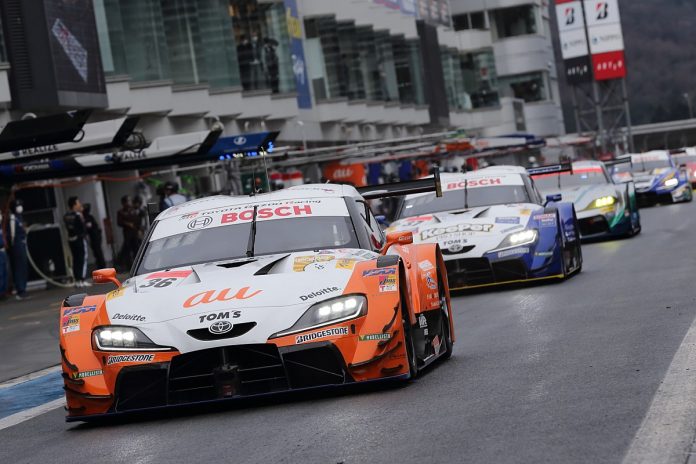 Haltermann Carless will supply approximately 300,000 liters of so-called second-generation biomass fuel made from cellulose to the Japanese championship using its ETS Racing Fuels brand as part of a three-year deal.

The plan is for all cars, in both the GT500 and GT300 classes, to begin using the fuel in 2023 pre-season testing, with off-track and on-track testing taking place this year in preparation for its introduction.

Masaaki Bandoh, chairman of SUPER GT promoter GTA, revealed that GT500 manufacturers Toyota, Honda and Nissan are in the process of performing bench tests with the new fuel, which is designed to be compatible with existing engines and produce a comparable level of performance to conventional gasoline.

The fuel has also been supplied to the foreign manufacturers whose GT3 cars participate in the GT300 class.

A first on-track test with the new fuel will then take place with the whole field on the Monday and Tuesday following August’s Suzuka round.

Bandoh clarified that the additional cost of using the fuel will be shared out among all the championship’s stakeholders, including the manufacturers, the circuits, tire suppliers and the GTA itself.

He also outlined a desire to reduce the number of tires each team is able to bring to the track for each weekend in the name of promoting tire durability.

The move follows SUPER GT introducing three longer 450km races this year, which Bandoh said earlier this year was motivated by the desire to encourage engine manufacturers and tire suppliers to focus on the longevity of their products at the expense of outright performance.