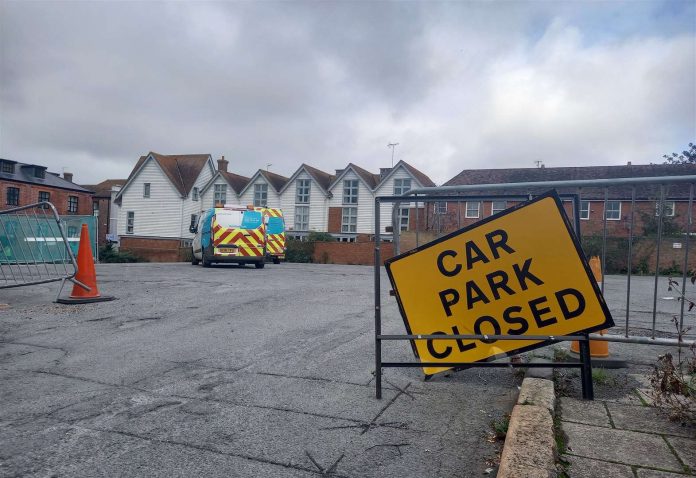 High streets across the county are on their last legs. Business rates and the lingering impact of lockdown are crippling many businesses but for shoppers simply affording to park – or finding a space – is the biggest issue, as is the case in Canterbury.

There the city council has been accused of “killing” the high street with controversial measures opponents claim will see visitor numbers plummet.

Rosemary Lane car park has been closed since 2020, and is among those now on sale

The latest is the authority’s decision to move forward with its plans to sell off four city center car parks to housing developers.

It comes on the back of a 25% rise in charges at some car parks, and the recent decision to mothball the Sturry park and ride for two years.

Critics have branded the sale of the car parks “illogical” but the council’s leader says their disposal will “create economic growth and prosperity by regenerating underused and under-performing public assets”.

All four are earmarked for housing in the council’s Local Plan – the blueprint for what can be built and where – and between them could provide room for about 55 new homes.

The cash-strapped council says selling the country will help it “improve [its] financial position while ensuring investment and economic opportunity in the district”.

But the decision has been blasted by many, including Nick Eden-Green, deputy leader of the city’s Lib Dems.

“In short, to kill off our prime economic asset.”

Plans to sell and develop the four car parks were approved and adopted in council strategy documents in 2016 and 2017.

“These decisions will make the city far less accessible… and will be regretted in the future as the acts of a council desperately trying to recover from its other poor financial decisions.”

But Cllr Eden-Green says these decisions were taken before it was decided last month to mothball Sturry Road Park and Ride.

He continued: “The decision [to sell the car parks] betrays utterly illogical thinking, a failure to follow their own policies and a desperate attempt to prop up their finances by forcing motorists to use the £9m white elephant that is the Station Road West car park.

“That, of course, is situated at the wrong end of the city from the shops!

“These decisions will make the city far less accessible, will rebound on residents living in the outskirts of the inner city who will find they can’t park near their homes, and will be regretted in the future as the acts of a council desperately trying to recover from its other poor financial decisions.”

But leader of the council Ben Fitter-Harding (Con) has defended the move.

The two most substantial car parks being sold are Rosemary Lane – which provided 96 spaces until it was shut in 2020 – and Station Road West temporary car park, which was in use only while the council undertook work to construct the multi-storey car park that is in operation nearby.

Meanwhile, St John’s Lane car park comprises 19 spaces, which are set to be reallocated in other city center car parks.

Cllr Fitter-Harding described the marketing of Rosemary Lane as “a massive plus for the taxpayer”.

“This clearly valuable asset will be regenerated, to the benefit of the local economy and the public purse,” he said.

“Rosemary Lane car park is a bomb-site car park, badly located in terms of car access and it used to be a regular contributor to the horrendous congestion on Castle Street before it was closed.

“Castle Street multi-storey car park, on the other hand, has plenty of spare capacity to absorb the cars displaced from Rosemary Lane, plus it uses our advanced ANPR system to make it easier for people to park.

“So I’d love to know from Cllr Eden-Green how that’s killing anything other than congestion.”

He added: “Sturry Park and Ride hasn’t been closed, it has been mothballed. The service has been suspended until there’s a more viable use case for it.

“Subsidising Sturry Park and Ride to the tune of almost £5.50 per user, per trip, was a tremendous waste of public money when we have sufficient car parking capacity in the city center at a range of price points.

“These disposals are very well thought out and comply with our corporate plan, creating economic growth and prosperity by regenerating underused and underperforming public assets.

“They help the council undertake other capital projects, like the £8m-plus investment we’ve approved for our leisure centres.”

The Local Plan sets out the planning constraints for each car park site that any future planning application would have to consider.

At Ivy Lane, a set of development principles established in March 2012 are still considered relevant, which include respecting and re-establishing the existing building line and being a car-free development due to the availability of public car parking.

Lead councilor for property Cllr Barbara Flack said: “Selling assets such as land and property that are not contributing to our economy or other priorities, and then reinvesting the money this generates with a focus on redevelopment and regeneration, is a key priority for us in our corporate plan.

“The disposal of these four car parks, which is in line with our current parking strategy, will allow us to improve our financial position while ensuring investment and economic opportunity in the district.

“In particular, it will provide land for much-needed new homes in prime city center locations.

“We expect there to be a lot of interest and look forward to evaluating the offers we receive in due course.”

All four car park sites are being marketed on the council’s behalf by RPC Land and New Homes.

Mark Pegg, head of business at The Brogue Trader

The selling of car parks has exacerbated residents’ fears for the city’s high street.

The news that charges at Canterbury’s most popular car parks are to rise by 25% was met with anguish from traders who worry the move could “destroy” the city’s retail sector.

Mark Pegg, head of business at The Brogue Trader, which works in partnership with Loake shoemakers, said: “If people are having to pay more, are they going to travel in?

“The biggest complaint we get from customers is the price of parking.”

Neil Munro, owner of The IT Store in Burgate, said the council was “shooting themselves in the foot”.

“You can’t sell off car parks and close the park and rides. They seriously need some common sense injections…build some really affordable housing, boost the high street by lowering extortionate rents.”

“If they are forcing people to pay more, people are not going to come in,” he said.

“They’re more likely to go shopping online, which is going to destroy retail even more.”

News car parks are being sold has reopened concerns for the high street, with many residents quick to express fears the move will deter people from shopping in the city centre.

“You can’t sell off car parks and close the park and rides. They seriously need some common sense injections…build some really affordable housing, boost the high street by lowering extortionate rents.”

But the city council’s leader maintains the authority is doing a lot to support city center trade.

Cllr Fitter-Harding said: “We’re doing a phenomenal amount to support Canterbury High Street through the £20m Leveling Up Fund bid we’re currently working on and will submit later this year, based on Canterbury’s Tales of England.

“We’re also spending millions from parking income and developer contributions regenerating St George’s Street, and working to unblock investment in the old Nasons and Debenhams sites that stalled due to issues with waste water nutrient neutrality.

“Everything that this Conservative council is doing is setting the scene for growth and inward investment in our district, Canterbury high street included.”