SUPERCARS IN TALKS WITH F1 ABOUT SUPPORT PROGRAM 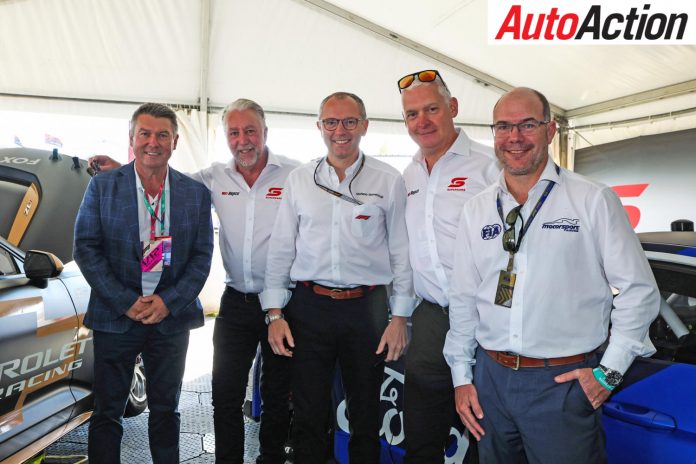 Supercars could soon be graduating to the grand prix world on a regular basis.

Highly-popular appearances at Albert Park and a change of ownership to the RACE consortium have cleared the way for serious negotiations about an overseas Formula One future for the home-grown touring cars.

The first step towards a GP deal came at Albert Park when senior Supercars officials met with their F1 counterparts, including grand prix boss Stefano Domenicali.

Three F1 visits are being seriously discussed, in the region closest to Australia, and it could happen as soon as 2023.

“We are absolutely interested to look at it, and to see how it could potentially work for us,” the new chairman of Supercars, Barclay Nettlefold, reveals to Auto Action.

Supercars has been the number one supporting act at the AGP for well over a decade, lifting the category’s profile when the Albert Park sprints became a round of the championship.

Grand prix insiders have been long-term supporters of Supercars because of the category’s entertainment value, and that will be a key to any deal to race as an F1 support act. They would also bolster the F1 program in countries where there is little or no national motorsport to provide action outside the Formula One sessions.

The strength of Supercars’ position is reflected in their shared use of the Formula One pitlane, which was specially lengthened for championship, and unique passes to give drivers and team bosses special access to the exclusive grand prix paddock.

Supercars is also able to sell merchandise at the circuit, and operate its own hospitality above the garages, another major concession from Formula One.

There have been several previous forays into the Formula One world, including the Middle East, China and the USA, but none of the races – either standalone or on the grand prix program – were successful.

Supercars also failed in its bid to create a new Asian race in Malaysia, on a street circuit in the capital of Kuala Lumpur, although there was one ‘demonstration’ event.

But the new RACE management believes there is a giant overseas opportunity for Supercars, particularly with the new Gen3 cars from 2023. There is even some suggestion that a special group of cars – perhaps superseded Gen2 racers – could be positioned outside Australia for guest events.

Any F1 program would mean an extension of the current 13-event calendar in Australia and New Zealand, but Nettlefold is not ruling anything out.

“F1 is going through phenomenal growth at the moment, as we know, and there is a lot more global demand than they can cater for. And, with the money that’s being provided, there is no question they are lacking category content to support it,” Nettlefold says.

He has already investigated some of the detail in the plan, but is not making any commitment just yet.

“Discussion are being held, but it’s at a very early stage. Ideally, we believe we could run 15 races in a season. We have to look at what that means for the calendar.”

He’s being optimistic, but not bullish, about the potential timing.

At the same time, Nettlefold acknowledges the importance of the existing NZ flyaway market.

“I think also, with going to New Zealand, there is a lot of pent-up demand. I’ve been quite surprised at how important our sport, Supercars, is in the New Zealand market. And how well known it is and how it is followed.

“When they don’t have an America’s Cup, or a British Lions rugby tour, we’re a constant.”

For more insights into the future of Supercars purchase the latest edition of AUTO ACTION, featuring an exclusive interview with Barclay Nettlefold.