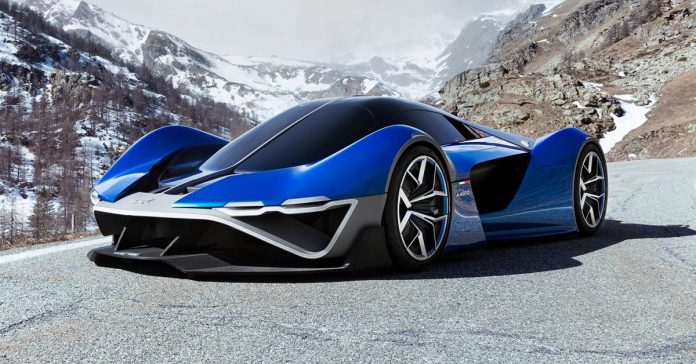 Not every concept car ends up getting made, but that doesn’t mean that you stop trying, right? Had no one dreamed up a convertible at Chevrolet in the 50s then the Corvette would not be a happy reality today. So yes, things often change from concept to execution because not everything that the design team dreams of can be translated into a sales success. That said; when it happens, it is usually worth the wait and all the back and forth from the drawing board to actual production on assembly lines. All successful cars, from the Ford Mustang to the Dodge Viper were nothing but insane concepts at the time.

Now, when it comes to design school, a lot of the concepts made by the students tend to remain pipe dreams on paper. For 28 lucky students from Turin’s IED Design School, things became a lot more real. The Alpine A4810 concept is a two-seater Berlinette with plenty of Formula One aerodynamics and tons of mathematical applications that is a rendering, but one that has Alpine hooked.

It’s not just a good-looking super carbut there’s a lot of special that goes under the hood as well, and if it truly makes production, the Alpine A4810 concept car could be the next big revolution in the automobile industry.

A Student Initiative By Alpine

The concept was given to the students by Alpine in the fall of 2021 and two ideas were finally chosen from all the ideas to form the basis of the final design. Not only does the car look like a hypercar, but it’s also been made keeping the future in mind. The 28 students in the Masters in Transportation Design program at the Istituto Europeo di Design Turin were given a very specific goal.

They were to design a car for Alpine, keeping its ethos and aesthetics in mind, for the year 2035. So, while the Alpine A4810 concept might become a reality, it won’t for the next decade or so.

That didn’t stop Raphael Linari, Alpine’s chief designer, from getting excited about the project as he said, “The result is a futuristic supercar that explores new territories for the brand in terms of package, proportions, and design language. The different creative approaches of the young and talented students combined with IED know-how gave rise to some very interesting responses.”

Related: Everything We Know About Alpine’s Electric Future

The Alpine A4810 concept car is a hydrogen fuel supercar project. The intention towards hydrogen-powered is pure but for now, they have no power train details mentioned. Instead, all the focus lies on the equally powerful design.

The director of IED Turin, Paola Zini, was equally excited considering the students got to work with Alpine head honchos. Zini said, “Alpine’s contribution was one of passion, enthusiasm, and constant presence, and marks another milestone in international collaboration. Furthermore, this was an opportunity for students to work under the guidance of Antony Villain, Alpine Design Director; Raphael Linari, Alpine Chief Designer; and several IED alumni [working for Alpine] whom we had the pleasure of seeing again.”

The Alpine A4810 is a near-low rider, with plenty of dips and rises, making it a curvaceous concept. The headlights lie in the tip of the nose, meant to be hidden when not illuminated. The fenders sit higher than the nose and the cabin sits right in the center of the car, rising above everything else.

It’s a beautiful car, and Alpine seems to realize the very importance of such a design. The rear of the car is fairly aesthetic as well, with flying buttresses connecting the main portion of the body to the fenders. The tail looks like a W when viewed from the top, with vertical taillights on each edge and the dual exhaust outlets placed in the center.

There has been work done in the cabin as well, with a very futuristic-looking steering wheel jutting out far from the dashboard. There are digital displays on each side of the wheel, while red accents pep up the cabin.

What’s In A Name?

Alpine, as a brand, is named after the Swiss Alps, miles of snow-covered mountains that attract tourists from all over the world. The students at IED thought of a novel way to continue this tradition, by naming the car A4810. The “4810” is a reference to the height of the Mont Blanc mountain, which is a part of the Alps.

The students also imagined, in their rendering of the supercar, that it would measure 16.7 feet (5.091 millimeters) long, 6.59 feet (2.010 millimeters) wide, and 3.46 feet (1.055 millimeters) tall. The bi-tone colors, carbon fiber, and matte black elements all come together to make the Alpine A4810 look stunning.

While this is all on paper, the Alpine brand will soon be bringing in the GT X-Over EV in 2025 that will ride on the CMF-EV platform from the Renault-Nissan-Mitsubishi Alliance.

A Detailed Look At The Toyota Rhombus Concept

Arun Singh Pundir has been a longtime media crackerjack and worked most of his life in sales and marketing. In 2018, he officially flipped and switched sides to the editorial. He lives with his wife, two rascally sons and is a car and motorcycle nut in his free time. Not that he has too much free time. He currently writes news, features, and listicles for HotCars on anything that has any number or kind of wheels. He is also penning pop culture, lifestyle and all things rich for The Richest. For now, he considers his Isuzu D-Max V-Cross, Suzuki Ciaz, and Royal Enfield Classic 500, the three current flames of his life. His dream is to drive around the world; even if it takes more than eighty days.