Driver slapped with fine for charging his electric car at Lidl 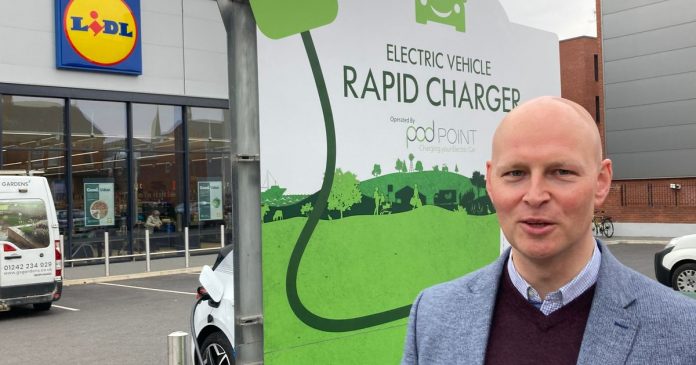 The new owner of an electric car wants others to be aware of the possibility of being fined if they charge their car at a Cheltenham supermarket. Max Wilkinson, who is also a Cheltenham councilor, recently acquired a four-year oil hybrid Mini Countryman.

As he lives in a street with no EV charging facilities he took it to Lidl supermarket in Swindon Road, combining a shopping trip with giving the car a charge. Having bought his groceries he went home and returned to get the car after two hours, by which time the hybrid Mini was about half-charged.

It was only a week later when Mr Wilkinson got a letter with a fine of £90 (reduced by half if he paid quickly) that he realized his mistake. Signs around the car park say customers can only park for 90 minutes, including at the EV charging points.

READ MORE: Leaseholders take back control after being stung with huge bill

Mr Wilkinson has paid the fine and doesn’t dispute it. But he does think it doesn’t quite make sense to restrict car charging to 90 minutes as well.

He said: “I’ve paid the fine and it’s a fair cop. However, it seems illogical that quite a lot of EV and hybrid owners won’t be allowed to spend enough time in the car park to get a full charge.

The length of time allowed to use the charger, 90 minutes, is clearly posted on the sign
(Image: Aled Thomas)

“The company probably should make that clear on the app or the charger itself. For me, this further highlights the need for Gloucestershire County Council to finally deliver its on-street electric vehicle charging infrastructure.

People want to do their bit by switching away from dirty petrol and diesel vehicles. At the moment that change isn’t being made easy enough.”