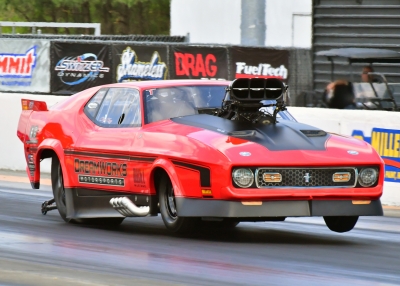 Relocated from the now shuttered Atlanta Dragway, the event is one of six in a 2022 NMRA/NMCA series that began last month in Bradenton, Florida. In addition to all the on-track action, there will also be show judging for both cars and trucks, a high-performance swap meet, a Manufacturers’ Midway featuring the latest in performance technology and an appearance by the original “Bigfoot,” the monster truck that revolutionized the category and packed stadiums for 30 years.

While the bulk of spectator attention will focus on an Xtreme Pro Mod field led by reigning NMRA/NMCA Pro Mod champion Chip King of Roxboro and defending All-Star event champion Robert Abbott of Bowling Green, Florida, the battle between the COPO Camaros, Cobra Jet Mustangs and Drag Pak Challengers for the Factory Super Car title also will be closely watched.

Significantly, champions will be crowned in almost a dozen heads-up categories including a host of Ford-exclusive classes like Coyote Stock, which features wheel standing stick shift Mustangs. For Mopar fans, there’s a late model Hemi Shootout for hemi-powered Challengers, Chargers and Jeeps.

Nevertheless, there’s little doubt that the Pro Mods are the stars of the show especially since this will be the only time this year that the erratic, exotic and diverse 3,000 horsepower hybrids race at The Rock.

The King-Abbott rivalry is a natural, of course, with King at the wheel of a Jerry Bickel-built red 1971 Mach 1 Mustang, one of three Pro Mods in his DreamWorks Racing inventory, and Abbott in a basic black 1969 Camaro. Not only is it Ford versus Chevrolet, it’s Carolina versus Florida.

Not that those two will have the category to themselves. In fact, neither hoisted the trophy at the Florida opener. That distinction fell to veteran Scott Wild gust of Wartburg, Ontario, Canada, who is expected to contend again this week along with Craig Sullivan of Plainfield, Ind., and his “Barn Burner” early model Dodge Daytona.

A two-time runner-up on the NHRA Pro Mod tour (Houston in 2002 and Gainesville, Florida, in 2013), the 59-year-old King has been racing Pro Mods for more than 20 years and shows no signs of slowing down .

In fact, he already has shaken down a new 2019 DreamWorks Camaro and just added a ’70s era Dodge Charger Daytona R/T built by Hall of Famer Jerry Haas to his stable, a car in which he plans to compete at selected NHRA tour events .

Adult tickets are $25 per day although spectators can save $5 by purchasing a Saturday-Sunday combo ticket. Children 12 and under free with a ticketed adult.