Home Wedding Cars The summer's busiest wedding vendor? It may be a horse named...
Wedding Cars 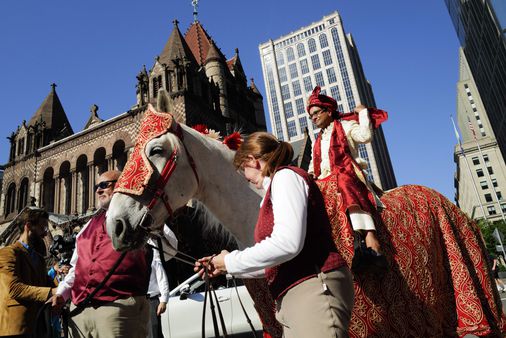 It wasn’t long ago that Lenny (or his owners) had no idea about baraat or Vidaai ceremonies. They had never heard of the joyous procession (or baraat) that involves a groom riding something—an elephant, a convertible, a white horse—to meet his bride and her family at her house or the wedding venue. Or the farewell ceremony where the bride and groom depart in a carriage (the Vidaai).

Today, wedding planners ask for Lenny by name, and his website shows him decked out in red and gold, posing amid people wearing turbans and saris. He’s been surrounded by Indian, Pakistani, or Bangladeshi guests chanting “Leh-NEE! Leh-NEE! Leh-NEE!”

Julie Kliever petted Lenny the horse before a Baraat ceremony in Copley Square.Carlin Stiehl for The Boston Globe

But he started life on an Amish farm in Ohio, pulling equipment, and the early requests for his services ran along the lines of “Do you have a white horse for a groom to ride?”

Lenny came to Rhode Island by way of Connecticut in 2012, when Julie and Jack Kliever needed a horse after the sudden and devastating death of Ted, helped of a two-brother Percheron gelding team.

Lenny, also a Percheron gelding, is tall (17.2 hands in horse terms) and gleaming white with kind, dark eyes, and thick white lashes. His vibe is so zen he could be a meditation influencer. 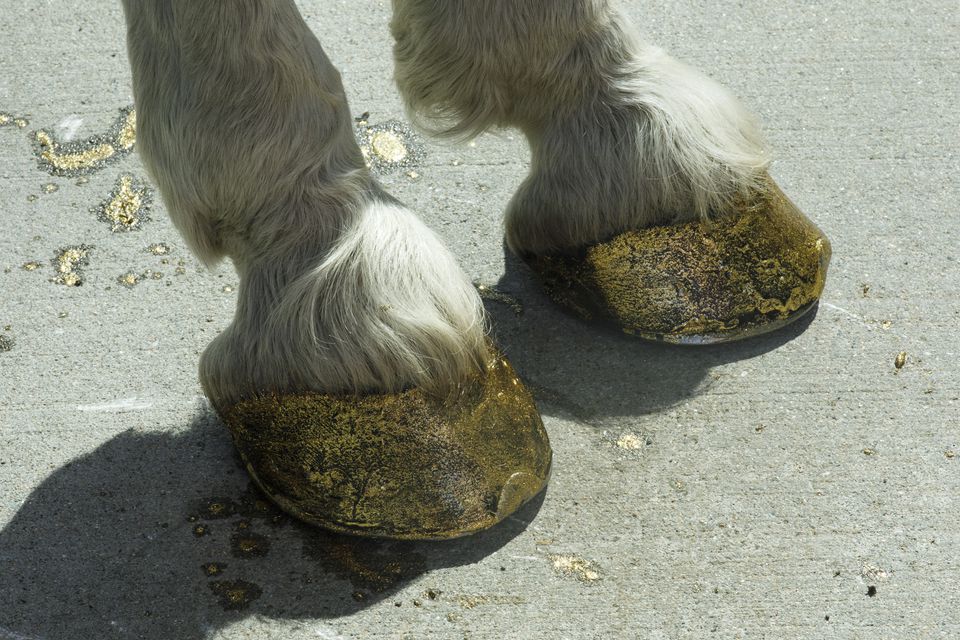 Lenny has his hooves painted gold in preparation for an Indian Baraat ceremony.Carlin Stiehl for The Boston Globe

He’s lovingly described as a “goofball” and a “klutz” by Julie Kliever. His former owner, who was forced to sell him after a change in life circumstances, missed him so much that it was five years before she could look at a picture of him without crying, she emailed the Klievers.

Lenny was brought on to do hayrides, but for a while, he also moonlighted as a police horse, and worked private security gigs. He still does funerals and Santa work, and non-South Asian weddings too.

But with New England venues increasingly hosting large, traditional South Asian weddings, according to Aarati Naidu of Firgun Events, there’s a niche for a horse who can keep his cool amid dancing crowds, drumming and a boombox blaring everything from Bhangra to Michael Jackson.

“He’s 100 percent professional,” said Rishi Bawa, the owner of Silk Events, a DJ and lighting firm, who has worked regularly with Lenny.

A Saturday in late June found Lenny at the Fairmont Copley Plaza, or rather outside of it (horses are not yet welcomed into hotels).

The groom, Rishi Wadhera—a love-struck cardiologist at Beth Israel Deaconess Medical Center—would not arrive until 4:30, but Lenny got to town at 3:30, and like all working Joes trying to make a buck in the big city , immediately encountered a parking problem.

The wedding planner, Nicole Simeral, of Boston and Palm Beach, had taped “No Stopping Anytime” signs to three parking meters on the street behind the hotel—ample space for Lenny’s “Air Horse One” truck—but of course, had two signs been ignored.

“I called the police to have the cars towed,” Simeral said in a “this is being handled” tone, her Louis Vuitton bag tucked under her arm as she strode to the middle of the third spot (still empty) in the blazing sun to guard it from scofflaws.

Incredibly, the parking was sorted out—with the discovery of an empty commercial spot around the corner—and Lenny sauntered down his ramp, 1,750 pounds of animal suddenly on a Back Bay sidewalk.

His appearance in the middle of it all—a big construction project, nearby Duck Boats, the hot afternoon sun—jolted people, if only momentarily, out of their lives.

Three teenage boys dropped their attitude and posed like children in front of him. A man who looked down on his luck asked if he could pat him (yes). A Bostonian smiled. 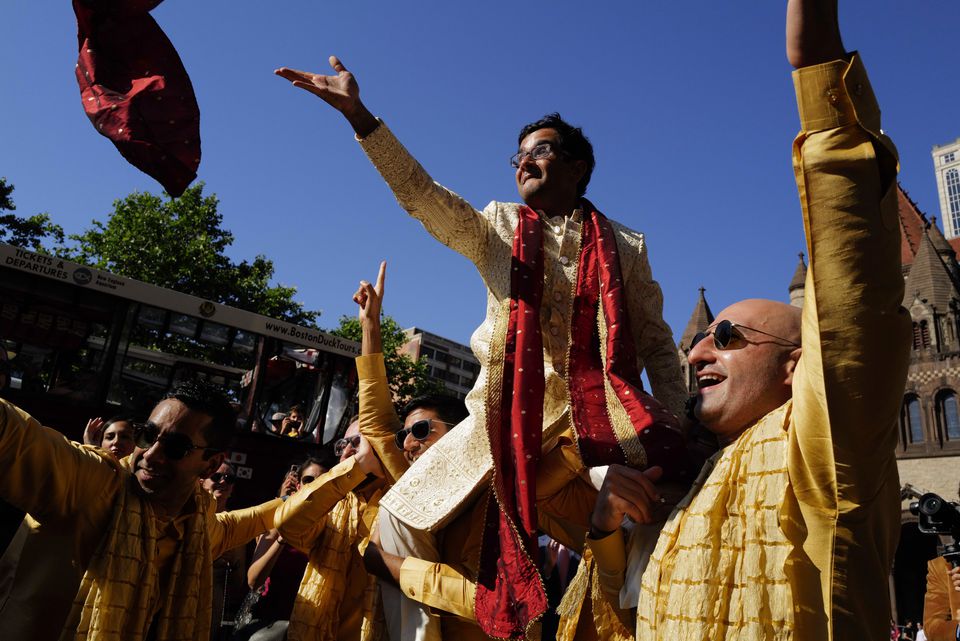 Rishi Wadhera tossed his turban atop friends during his Baraat ceremony in Copley Square.Carlin Stiehl for The Boston Globe

With the baraat nearing, and Lenny happily snacking on hay from a bag tied to the exterior of his truck, Lenny’s staff—the Kleivers and an assistant, Luis Del Rio—began applying his look.

They combed his forelock and tail, clipped flowers into his mane, painted his hooves with hoof oil infused with gold glitter—and gossiped about their star colleague.

“He thinks it’s a party for him,” Julie Kliever said.

“Weddings are perfect for Lenny,” Jack Kliever said. “There’s a lot of entertainment and not much work, and Lenny doesn’t like to work.”

Suddenly it was 4:30, and Trinity Place, a side street just off Copley Plaza, came alive with music and dancing and what can only be described as sheer joy. It felt like a Bollywood movie shoot had broken out where before there had only been the backs of buildings.

The groom was there, and his groomsmen, energetic and glowing in their gold tunics, and a white convertible BMW appeared, with a flower garland on its hood and a sound system on its rear, and a Dholi (a drummer), and the groom’s beautiful dancing mother.

Soon the groom was atop Lenny, and the happy knot of guests slowly made its way up the short street, took a left onto busy St. James Ave., to the delight of some drivers and, need it be said, to the annoyance of others.

And then, about thirty minutes after the baraat started, the groom dismounted in front of the hotel, and went to greet the family and friends of his bride, Prakriti Gaba, a cardiology fellow at Brigham and Women’s Hospital. About 200 guests crowded around, while off to the side, Lenny, the consummate professional, waited to hear that his work was done, and then headed back around the corner to his truck.

He was offered but refused hay and water. He stomped a few times. He was called a “noodge” by Julie Kliever.

And then he walked up his ramp into the van, and drove off into Boston traffic. The next weekend Lenny would do it all again, twice. 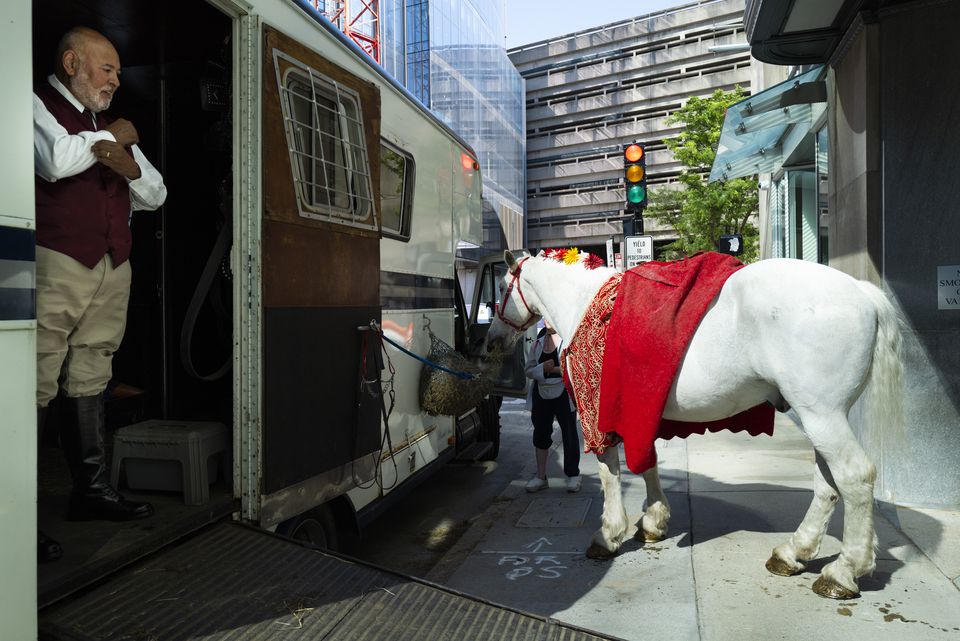 Lou Del Rio fixed his cuffs while Lenny waited to be tacked up before carrying a groom in an Indian Baraat ceremony in Copley Square.Carlin Stiehl for The Boston Globe