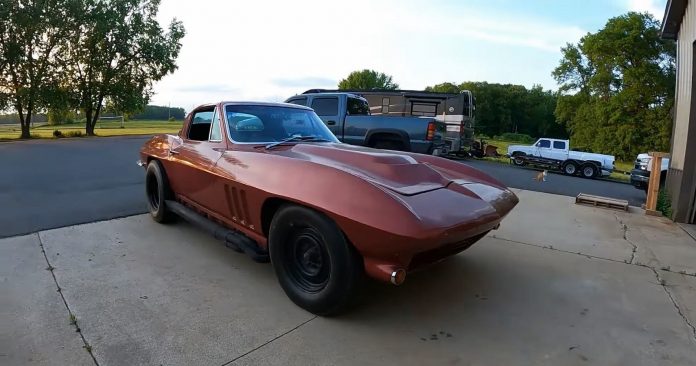 The car was a recent barn find and is now in the hands of presenter Jordan Pennington and his Indiana-based garage.

The prospect of a mid-generation C2 holds many opportunities, but this particular Vette comes with surprises.

RELATED: Here’s Why The C2 Corvette Is One Of The Greatest Automotive Designs Ever

The video opens with this C2-generation Corvette pony car coming off a trailer – a quick nighttime glance reveals an unusual front end highlighted by aftermarket headlights below the bumper.

Side pipes also indicate this Chevy is anything but stock, with little effort, the Corvette starts up and heads into the garage.

A more detailed exploration uncovers an entirely reworked front clip; the factory pop-up headlights are gone (which explains the ungainly ones underneath).

Instead, there’s a solid nose bordered by a sculpted hood, in between the pendant-style headlights is a rough-looking valance accented with piping for a homemade-looking lower grille.

RELATED: Stripped And Reassembled Chevy Corvette C2 Needs A Restoration So It Can Put Its Top Down

Hitting The Road In The Classic 1965 Chevrolet Corvette Big Block

Following repairs to the ignition and coil, Pennington takes the Corvette out for a quick spin, the big block 396 V8 sounds robust and ready to roar, but shortly while underway, the car dies.

A flick of the fuel pump switch restores gas to the engine, and the journey continues.

The Vette is riding on tires from 1969, so Pennington and his co-pilot keep the trip to a minimum – a check of the fuel tank hints that the gas isn’t new either; at the same time, we learn what’s in store for C2.

The car will retain its “Joe Dirt” looks for the most part, Pennington talks about adding rocker panels to cover the side pipes and placing a rear exhaust valance in the back.

At some point, a factory front end will return, but, new tires will be one of the first improvements.

While the C2-generation Chevy Corvette debuted in 1963, the Corvette grew more refined and potent for the 1965 model year, most noticeably, the front fenders now had “gills” that served as exhaust vents; it’s a design element that continued with many future ‘Vettes.

Improved braking performance was necessary as the 1965 Vette offered multiple V-8 options, including the storied 396 engine and its 425 horsepower.

Used Car Bubble Likely To Burst In 2022, Here’s What We Know

Dave Goldberg is a lifelong auto enthusiast and holds a BA in Journalism from The George Washington University. While he leans towards European wheels for his personal driving, Dave gets excited about everything from Acura to Zagato.