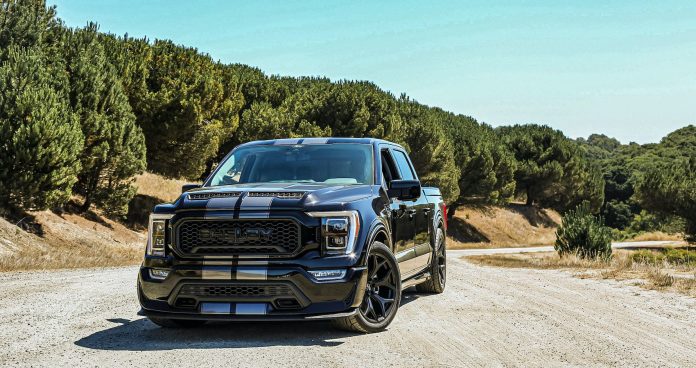 We have fond memories of her birth in 2017, an offspring of the legendary Lightning sport truck nameplate of the 1990s. The 2021 Shelby F-150 may no longer sit on the throne of the most powerful pickup truck in the world, but we love it unconditionally because it is no less powerful today than it was in 2021. As with most things in life we ​​were blissfully content with the Super Snake’s up to 775 horsepower until we met another that made even more horses.

We’re talking about the aftermarket-retouched Hennessey Mammoth 1000 boasting an excess of 1000 horses and an overall meaner and badass performance. In situations like this, people tend to move on from their old flame and run into the arms of a new damsel.

Admittedly, the Hennessey Mammoth 1000 is the undisputed King of the Road, the most powerful pickup truck you’ve ever seen. But that crown once sat beautifully on the Shelby F150 Super Snake’s proud head, and we haven’t forgotten. Despite meeting and even writing about the new king, we still return to our former love. Unseated but still powerful, the F-150 Super Snake sits on a historic platform unsmirched by tuning houses. But that’s just one reason we love this truck. There’s more.

The F-150 Super Snake: Six Hundred And No More

You realize “there’s more” doesn’t mean numerous Shelby Super Snakes hitting the production line. It means we love this truck for many more reasons. Indeed, exclusivity promotes affection; does it not? If it’s all yours, you love it more. That’s exactly the logic behind the Blue Oval’s decision to limit production of the F-150 Super Snake Pkg to just 600 units split equally between the 2-door and 4-door variants.

To reinforce the exclusivity, each truck comes with a CSM-numbered dash plaque identifying its specific production number. That way, owners are constantly reminded their Super Snake is one of a kind.

Our favorite feature of the F-150 Super Snake is its legendary platform. It’s historic enough that the Ford F-Series is in its fourteenth generation, but the Super Snake is even more emblematic. This truck is based on the SVT-branded Lightning, a historical and one of the most successful platforms in Shelby history. Replacing SVO (Special Vehicle Operations), SVT (Special Vehicle Team) was Ford Motor Company’s high-performance department responsible for developing the marque’s highest-performance vehicles.

Preoccupied with making efficient Mustangs, the Team took a break in 1993 to build the first Ford Lightning. The first-gen Lightning had a successful run, to put it mildly. It was a legendary street sport truck but was retired in 1995. SVT released a second-generation Ford Lightning in 1999. Before the Lightning struck, other brands like GMC, Dodge, and Chevrolet did their best to present American drivers with a truck that offered more than just grunt work prowess; a truck that’s just as fun to drive as it was capable of towing and hauling stuff.

Now, you understand why resurrecting Lightning in the 2017 Shelby F-150 gave the Super Snake a special place in our hearts. Two years later, Ford gave the F-150 a facelift, with the Super Snake variant getting a completely revamped interior and exterior. Above all, the 2021 Shelby F-150 Super Snake got an all-new adjustable suspension system that provided enhanced stability and a squat profile reminiscent of the ’90s Lightning.

A separate partnership with Whipple and Borla allowed Ford to give Super Snake a powerplant that includes an optional supercharger churning out 325 horses more from the standard 450-hp 5.0L V8 Coyote engine. The powerplant produces a sound that’s uniquely Shelby. This was the fastest and most powerful truck heart until Chrysler cheated by handing the 2021 Dodge RAM TRX over to Hennessey to create the monster that took the crown from Shelby F-150 Super Snake.

Related: This New Ford F-150 Has The Heart Of A Mustang

Just 250 units of the Super Snake Sport are slated for production.

Going from a standing position to 60 mph in 3.45 seconds, the Sport variant may lack the King Kong prowess of the initial Super Snake but boasts street-cred specs to rival any other in its class. Plus, the interior is good for the money. It features a full two-tone leather seat re-covers, Shelby badging, carbon fiber touches, deep-tinted windows, and billet racing pedals. The Shelby F-150 Super Snake Sport is available through select Shelby dealers across North America.