Remember that fun little Jeep-lookin’ Mini Moke from a WWII British military vehicle development program? It’s been rehashed in several incarnations since, but the most recent (and most stateside) is Moke America, which wants to get Americans to switch from big gas guzzlers to fun little open-top electric cars.

The only catch is that these aren’t really electric cars.

Oh, they’re electric alright. They just aren’t “cars”, at least not in the traditional sense.

They fit into what’s known as a Low Speed ​​Vehicle class in the US (often colloquially known as a Neighborhood Electric Vehicle).

LSVs are a federally defined class of four-wheeled vehicles. They don’t have to be electric, but these days 99.9% of them are because it’s simply easier to produce that way thanks to fewer regulations involved with emissions standards. In fact, the LSV class already has comically few regulations to begin with.

There are basic safety requirements, such as being produced in NHTSA-registered factories and including certain DOT-certified safety equipment like specific windshield glass, backup cameras, EV pedestrian warning noisemakers, and seatbelts. But there’s no crash testing. No light testing. No brake testing. No much testing at all. As long as they meet basic production and certification requirements and travel at top speeds of between 20-25 mph, they’re pretty much golden (that’s also why Chang Li vehicles and other imported Chinese mini-EVs are almost never street legal in the US as they can’t meet these DOT and NHTSA certification requirements). 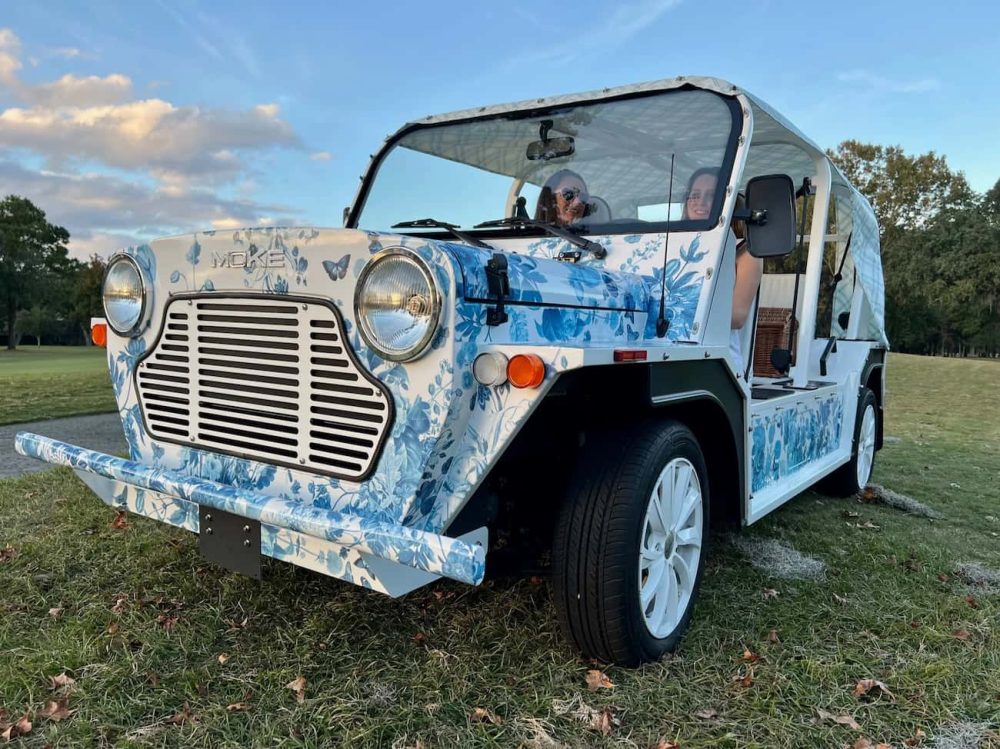 But Moke America’s CEO and Founder Todd Rome says his are the real deal and that they’re assembled for each customer at the company’s factory in Sarasota, Florida. Apparently conforming to federal LSV laws, the little vehicles are even street legal on most US roads with a speed limit posted up to 35 mph (56 km/h), as per LSV statutes in the US.

A 12 kWh lead acid battery pack offers an all-electric range of 40 miles and can be recharged from a conventional wall outlet, though the lead acid battery technology is nearly as old as the original WWII Mini Mokes.

According to Rome, the company has sold over 4,000 Mokes since its inception in 2016, bringing in over $100M in revenue (though it is unclear if that is just US or total international sales). If that sounds like a lot of cash for not a lot of vehicles, you’re right. But there’s a simple explanation. Each one is ridiculously expensive. 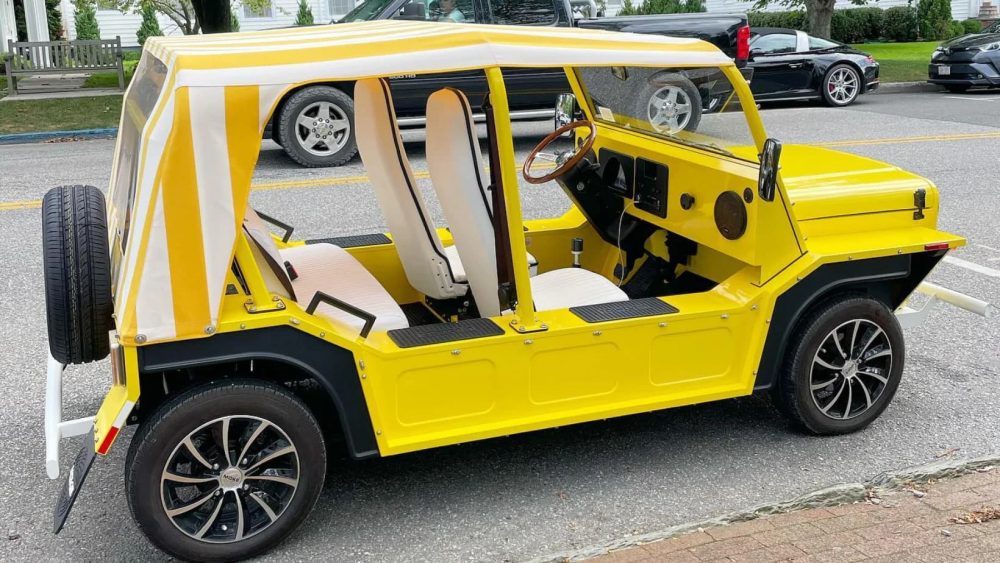 A Moke starts at just under $22,000. And that’s for the bare bones base model. Want tunes? A stereo costs extra. Want floor mats? That’s extra too.

But if you’re cool with a basic model to ferry around you and three friends in style, you can do it for a mere $21,975. Well, plus a 3% shipping fee. And an additional delivery charge. And of course the 4% credit card fee.

Ok, so the charges start to rack up here to north of $24k, but that apparently hasn’t stopped thousands of other folks.

And they sure do look like fun, though if the marketing video below is to be believed then it appears the most common customers are blonde women driving to their yoga classes.

In all seriousness though, this class of vehicle actually has real utility in the right location. While a 25 mph vehicle isn’t going to help you much on your highway commute, there are other key markets in the US where slower and simpler EVs could be quite useful. City residents living in crowded urban areas, coastal and island communities, gated neighborhoods and sprawling suburbia are all key markets for LSVs.

Isn’t that just a golf cart?

This is one of the most common questions I get when I cover LSVs. And the answer is “no, not really.”

Golf carts have nearly zero regulations. LSVs may have minimal regulations, but they’re there. And that’s the major difference, in addition to the fact that most golf carts struggled to hit 20 mph, whereas an LSV can go all the way up to a blistering 25 mph.

Golf carts also aren’t street legal, at least officially. They’re illegal on public roads in the US unless a local state or city ordinance has specifically created an exception for them, which is sometimes the case in coastal or golf communities. Many authorities look the other way because there are more important matters than ticketing a mom driving her kid on a golf cart to a friend’s house across the subdivision. But speaking technically, that mom is committing a misdemeanor. LSVs, on the other hand, are street legal for such uses (as long as the road is posted with a 35 mph speed limit or less).

Occasionally you do see golf carts advertised as being street legal models, but those are actually LSVs. They’ve gone through the production certification process and feature DOT-approved parts like seat belts and windshields. Interestingly though, most “street legal” golf carts aren’t actually street legal anymore since they don’t include backup cameras and noisemakers that have been federally mandated in LSVs for a few years now, but that will likely change as manufacturers slowly catch back up to the current laws.

So do LSVs look like golf carts? yes But are they golf carts? No. They’re something between a golf cart and a car, but don’t fit into either class, neither legally nor functionally. 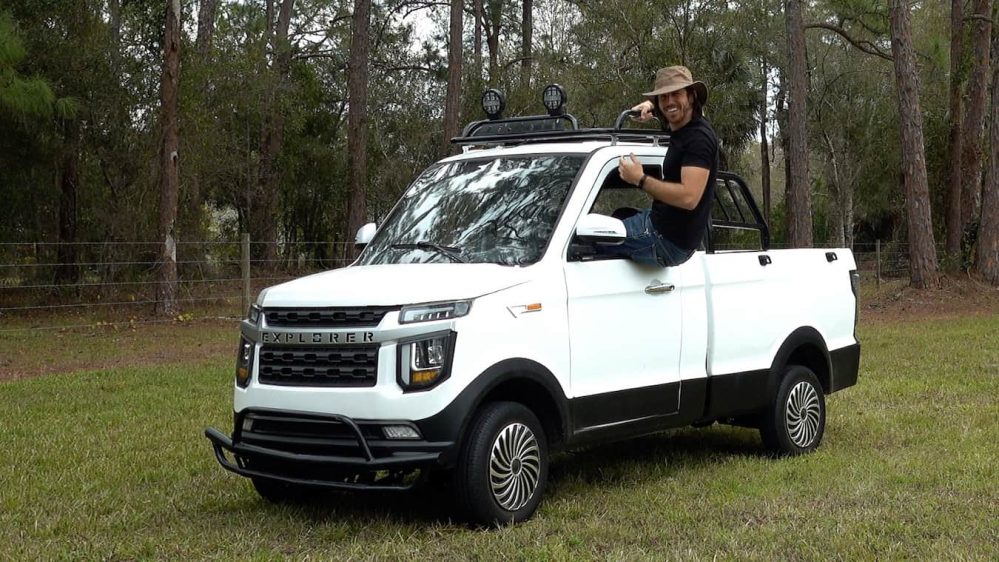 My own mini electric truck, which fits LSV’s performance levels but isn’t street legal due to a lack of certification

LSVs represent a tiny, minuscule amount of four-wheeled vehicles on the road today. They’re a drop in the proverbial bucket. But that drop is growing.

Slowly yet surely, more options are popping up in the US from distributors seeking to offer an alternative to full-size electric cars.

Such LSVs are appealing to drivers that want an enclosed and weather-proof vehicle with better safety protection than an electric bike or e-motorcycle, yet that doesn’t have the high purchase cost and insurance requirements of full-sized electric vehicles.

The industry still seems to be figuring out how to strike that balance, with a $22,000 electric Jeep-lite perhaps falling a bit north of the sweet spot when it comes to bang for your buck.

But as more models enter the market and the vehicle class becomes more accessible, shrinking electric cars could become an interesting new addition to neighborhoods in the US.